Rep. Sean Maloney formally announced his campaign for re-election to Congress last Saturday (Sept. 6). The Cold Spring area Democrat did so before a noontime crowd of about 100 supporters in Unico Park on the Newburgh, New York, waterfront. The Hudson River offered only a slight breeze that wilted quickly in the day’s late summer heat.

Maloney is running for a second term representing the 18th Congressional District after winning election two years ago against then incumbent Republican Nan Hayworth, who is now challenging him in return. Over the past eight years, the seat was also held by Democrat John Hall, who unseated Republican Sue Kelly. The 2010 census and the resulting redrawing of the district lines appeared to give a slight edge to the Democrats, at least in terms of voter registration.

“Here’s the choice. Let me make it real simple for you,” Maloney told his cheering audience. “This is a choice between a Bill Clinton Democrat who has gotten results and a Tea Party ideologue radical who never did. We both have a record. You don’t have to take my word for it. What did she do? What was her first priority? Her first priority was to give big tax cuts to multimillionaires like herself and to vote six times against middle class tax cuts for the rest of you. That’s wrong. My priority was to support middle class tax cuts. To support the middle class and oppose tax cuts for the multimillionaires who already got them and don’t need them.”

Maloney chose the Newburgh waterfront for his announcement to underscore a few themes central to his campaign such as creating more economic opportunity, bipartisan cooperation and commitment to preserving the middle class. His main district office is located in the struggling city where he said he has worked with officials from both parties, including Mayor Judy Kennedy who opened the event, on revitalization projects. 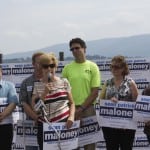 Only half joking, Maloney asserted that he may be the first federal public official to be headquartered in Newburgh since George Washington did so during the Revolutionary War.

Also emphasizing women’s issues Maloney criticized Hayworth for trying to defund Planned Parenthood and for favoring anti-abortion measures and also supporting “this thing that bosses should decide whether women get birth control or not.”

He made the last point without mentioning the issue involved a provision of the Affordable Care Act also known as Obamacare that requires employers to make contraceptive coverage available to employers. The Supreme Court ruled 5-4 in June that certain closely held or family-owned corporations cannot be required to comply if the rule violates their religious convictions.

In fact, while former President Bill Clinton, for whom Maloney worked in the White House, was invoked at least a half dozen times, the current president was never mentioned by name once despite six years in office.

Maloney also underscored service to constituents especially Hudson Valley veterans. Jim Williams, an Army vet who serves on a veterans’ advisory council for Maloney, was one of the pre-announcement speakers heralding Maloney’s accomplishments.

Praising his staff for dedication to solving individual and family problems, Maloney declared: “Those families have received $2.7 million that they were owed by their government because of the work we’ve done in 20 months. Six hundred of those people are veterans. Six hundred veterans came to us and said we need help on everything from homeless issues to PTSD to just trying to get an answer out of the VA [Veterans Administration] on an access to care issue or on a disability issue. I’m very proud of the work we’ve done for constituents of this district.”

Maloney began his speech describing his father’s struggle after sustaining a serious injury in a Navy ship when shells fell on him through broken netting. He spoke movingly of his father’s long months in rehabilitation, daily letters sent by his mother and then after his father’s recovery, getting a job and saving money from every paycheck to send Maloney and his siblings to school.

“That’s the kind of country we used to be. He had a job waiting for him when he got out of the service and it was a good job. Even though it wasn’t a lot of money, he could save on that income. He could plan for a future on that income. He could buy a house. His kids could go to school without a lot of debt and buy a car, and he could get to and from work. He had a government that had his back. He had a government that was doing things like the G.I. Bill, investing in schools, investing in infrastructure, and investing in the middle class. We had a tax system where the rich paid their fair share and the middle class wasn’t always getting squeezed,” said Maloney.

Two other speakers highlighted what they said was Maloney’s work toward advancing economic opportunity. One was Republican business owner Jim Taylor who is building a biomass business in Montgomery, New York, that Maloney has championed to the point of arguing with President Obama about moving quicker to promote alternative energy sources.

American Postal Workers Union official John Bouck spoke of Maloney’s willingness to stand with the union in fighting to maintain regional post office operations in Newburgh and more broadly his support for job creation and maintenance.

“Congressman Maloney understands that our economy locally and nationally needs good paying jobs that will be there tomorrow, a month from now and five years from now in order to be strong,” Bouck said.

“The proudest way I’m introduced in Washington is as the man who beat Nan Hayworth, and I want to keep being introduced as the man who beat Nan Hayworth! Not because I’ve got anything against her personally. Not because she doesn’t have a right to her views. I believe that she has the wrong vision for the Hudson Valley. She has the wrong choices. She has the wrong priorities. And I believe that working together we can do better but I need your help,” declared Maloney as he closed the rally.