Some foods come and go, but chili will always be with us.

There will always be PTA-sponsored chili cook-offs, and volunteer-fire-department chili nights. There will be couch-based parties in honor of televised sporting events that call for big pots of chili on the stove. And there will be times when the smartest, easiest way to serve a crowd is by cooking up two giant pots of chili: one vegan, one with meat; toppings on the side.

So that even if some hipster entrepreneur opens a chili truck in Brooklyn, setting off a surge in trendiness that culminates with cover billing on New York Magazine followed by a sudden, precipitous decline in the dish’s popularity, the rest of us will go on making and eating chili. Because we need it.

Even if we don’t know what it is.

Chili con carne, as its name implies, is chili peppers with meat. Nothing more. Food historians do not know when or how beans got added to the dish, but they do know one thing: It didn’t happen in Mexico, where stewed beans are one thing and stewed meat something else altogether.

Taking up the challenge, intellectual foodies fixated on nomenclature won’t allow you to call your big pot of chili “chile con carne,” even if it has two pounds of carne in it, because of the beans. And, sigh, one must laud their efforts to keep things straight, but when it comes to humble foods that have been made for centuries in whatever ways ordinary people have managed to make them, one needs to make small accommodations for beans.

At any rate, the chili we think of when someone says, “Would you like a bowl of chili?” — that chili — is not something I know how to make, except insofar as every American knows how to. It’s true. If someone were to request it, my first reaction would be panic. I don’t know how. I don’t have a recipe and never have. In fact, I consider myself a fairly bad chili maker because as a child I ate Cincinnati-style chili, which is completely apocryphal — it is served on top of spaghetti, contains allspice and Worcestershire, and is the kind of upstart cooking that could make a Texan pistol-whip you — and it is utterly, blissfully delicious. 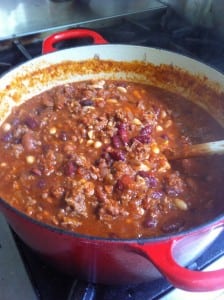 I have never made chili as good as the stuff I ate at Frisch’s Big Boy as a teenager, when my friend Janet and I rode our bicycles there on Saturday afternoons.

Still, if need be, I can figure out how to throw together a potful. I can think, Oh, yeah, that’s right: onions, garlic, spices, peppers, chilis, tomatoes, meat, beans — I can do that. As for quantities, I use whatever I have in the house. Yesterday, I had one big onion on my shelf plus a half a red onion in the fridge, so I used one and a half onions. I had three-quarters of a pound of chorizo and one pound of ground beef, so into the mix went exactly that much meat. Three peppers in the fridge meant three in the pot. And so forth. Chili is easygoing that way.

With chili, as with so many foods, the key is in the doctoring. And while I may not know how to make chili, I sure-as-heckfire know how to doctor it. My list of tools is below. Use any you like, in whatever proportions work. There are no secret ingredients; chili is by the people, for the people. Because whatever else happens, chili abides.

Which I suppose makes it the perfect dish for me to end my tenure at this wonderful publication with. After this week, I will no longer be writing this column; other obligations sadly make it impossible. Thank you all for giving me the chance to share my food with you these past couple years. It has been a joy and an honor. Eat well.

These quantities reflect what I had on hand. Adjust according to your supplies and taste. I blackened my peppers over the stove’s flame because I like the smoky flavor, but you can substitute a jar of roasted peppers, drained, or just use them fresh.

One thought on “Mouths to Feed: The Big Chili”