Democratic State Sen. Terry Gipson is trailing his Republican challenger Sue Serino by 12 points in his campaign for re-election to a second term according to the latest poll from the Siena College Research Institute. Election Day is Nov. 4.

Released Monday (Oct. 6), the poll of likely voters in the 41st Senate District, which covers parts of Putnam and Dutchess Counties, including Philipstown, shows Gipson trailing Serino by a margin of 52-40 percent.

In 2012 Gipson won election with 44 percent of the vote winning over the Republican incumbent by just 2,000 votes. That year the Conservative Party had its own nominee who won 17,000 votes. This year, Serino, a Poughkeepsie-based real estate broker, has the Conservative line as well, creating a formidable challenge for Gipson to overcome.

Gipson is also running on the Working Families line while Serino is the nominee of the Independence Party.

“Gipson benefited from a three-way race two years ago. In a head-to-head competition, he clearly has ground to make up.  Serino is a well-known and well-liked challenger and with four weeks to go she’s over the magic 50 percent mark.  Gipson will have to close the gap with independents if he wants to close the overall gap and tighten the race,” said Siena pollster Steven Greenberg in a statement released with the poll.

According to the data, while Gipson and Serino are holding on to their respective party voters, Serino has a large edge of 26 points with independent voters. Serino also polls very well among younger voters while the two candidates are more or less tied with voters 55 and over.

The campaign has taken on an increasingly shrill tone with both candidates referring to the other as allied with “downstate” or New York City interests. 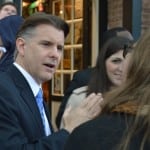 In response to the poll Gipson campaign spokesman Jonathan Heppner said: “For months downstate interests have been flooding our district with negative misinformation because Sue Serino has no record to run on. Senator Gipson’s campaign is now kicking into full gear and as the voters have the opportunity to compare his common sense solutions to the issues facing the Hudson Valley with the extremist positions of his opponent, the choice will be clear. As the residents of Dutchess and Putnam counties learn more about Sue Serino’s Tea Party views and her vote for the Dutchess County Energy Tax during our harshest winter in memory, they will reject her extremist message and send Senator Terry Gipson back to Albany this November.”

Serino released a statement that said: “This news is humbling and gratifying. I have worked hard to reach every corner of my district to listen to people’s thoughts, concerns, hopes and aspirations, and the outpouring of support has been phenomenal. Everywhere I go people react enthusiastically to my vision for Dutchess and Putnam Counties. Voters are uncomfortable that Terry Gipson puts his New York City political bosses ahead of the people of the Hudson Valley. People are unhappy with Terry Gipson’s devastating cuts to our schools, tax hikes, job losses and plan to give free college tuition to illegal immigrants. Instead, they want a better future for their families. Voters want quality education, meaningful tax relief, a thriving economy, good paying jobs and career opportunities for their children so they can stay here after they graduate. I am going to continue reaching out to people and earn their trust to build momentum for a victory on November 4.”

One thought on “Poll Says Serino in Lead Over Gipson”