Four members of the Cold Spring Planning Board took pains last Wednesday night (Nov. 19) to put to rest uncertainty about whether they received adequate advice from their consultants during deliberations over the proposed Butterfield development.

The members essentially affirmed they now accept the position of their legal counsel Anna Georgiou that the review process up until now has followed a legally mandated course and that previous decisions by the appointed Planning Board, in particular the issuance of a negative declaration as to the potential environmental impact of the project, have the force of law and govern their deliberations during the current site-plan review phase. 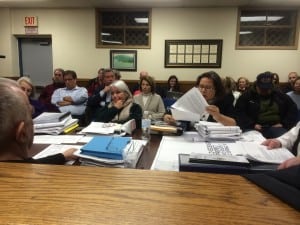 The members also acknowledged that the the Village Board decided not to give them broader authority to address the mass and scale of the project as they had requested under the special B4A zoning law granted for the project in May of this year.

Collectively, the individual statements by Arne Saari, Karn Dunn, James Pergamo and Anne Impellizzeri quelled a brushfire of criticism that started after the Sept. 17 meeting of the board where these same members had quarreled with Georgiou over the extent of their authority and whether they were properly advised as to when in the review process they could raise mass and scale issues.

Some community activists had taken to social media, including the Philipstown.info website, calling for the resignation of the consultants as well as board Chair Barney Molloy, alleging the board members were led astray.

Setting the stage before the board members spoke, Georgiou read into the record her defense of the process to date, which she had originally written to the Village Board after Mayor Ralph Falloon expressed concern over the Planning Board’s upset. Falloon has since opined he no longer believes it is an issue.

At the heart of Georgiou’s argument was that the review process to date had closely followed state law; that the Planning Board had already decided there were no potentially adverse environmental impacts, and that decision was legally binding; and that the Village Board as the legislative body had made a law restricting the Planning Board’s authority, and the board was duty-bound to live within those restrictions.

“I don’t feel we were misled or misguided by the firms,” said Dunn. “By asking questions we were doing our job. I am sorry things spun out of control … we need to get going to make sure this is the best project we can.”

“In light of counsel’s advice I will follow B4A. I have no other choice,” said Saari, the most vociferous critic of the process.

All four of the members made reference to the Village Board’s B4A deliberation and decision, and all found it wanting. “Our leading point was mass and scale, and the Village Board did nothing about it,” said Impellizzeri.

The Georgiou recitation, the prepared or at least thought-about board member statements, and the extra large audience of people not often seen at site-plan review meetings, lent an impression of choreography. Several speakers, led by Philipstown’s County Legislator Barbara Scuccimarra, applauded the Planning Board’s work and developer Paul Guillaro and urged the project now meet with swift approval.

Scuccimarra went on to say she and Guillaro had met with county officials about a floor plan for the senior citizen center she has championed, giving those discussions as a reason to approve the project. She also said she would be reaching out soon to Roger and Elizabeth Ailes, owners of the Putnam County News and Recorder, who previously pledged to financially support a senior center.

While it was clearly a milestone moment in support of the Butterfield project, several more weeks of deliberation will be needed for the board to review and approve their consultants’ work with Guillaro’s consultants on the many details the site plan presents.

In addition, the Historic District Review Board has notified the Planning Board that it would like to have a joint session to discuss its concern with the design elements and the mass and scale of the project. Molloy said he scheduled that meeting for Wednesday, Dec. 3, at 7 p.m. in the Village Hall.

One thought on “Cold Spring Planning Board Clears the Air”