Gordon Curran Stewart, the founder of Philipstown.info and The Paper, died early Wednesday morning, Nov. 26. He was 75 and had suffered from emphysema. A memorial service has been scheduled for Sunday, Dec. 14, at 1 p.m. at St. Mary’s Episcopal Church in Cold Spring. (In lieu of flowers, his family says it would appreciate a contribution to support Philipstown.info.)

Through an energetic combination of his public participation and strategic philanthropy, Stewart left a clear and lasting mark on the life of the Philipstown community. A relative newcomer to the area, Stewart had deep appreciation for both its natural beauty and its social dynamic.

He and his wife Zanne Early Stewart and their daughter Katy became full-time residents of Garrison in 2007.

Among his many projects and personal enthusiasms, this 2.5 year-old weekly newspaper and its companion website, which opened on July, 4, 2010, were central to Stewart’s local interests.  He began the website in response to a growing sense that Philipstown needed a fresh approach to community journalism and information sharing after the Putnam County News & Recorder, owned by Elizabeth Ailes and Roger Ailes, chair of Fox News Corporation, had begun to veer toward an ideological approach that alienated many local readers. 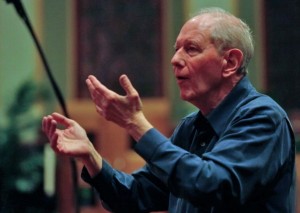 “One thing we will not impose are political views. No editorials,” he wrote when the website launched. “The only opinion pieces in Philipstown Dot Info will be yours” — the website welcomed readers’ comments on articles, a new approach to Philipstown journalism. “As to our news policy,” Stewart added, “we believe it has never been stated better than this: ‘without fear or favor.’”

Stewart established Philipstown.info as a nonprofit funded originally by himself because he was impatient to see it get started and because he wanted the focus on the journalism and technology issues not on fundraising. He always said, however, that he planned to move the operation toward a community-funded model that could serve as an example for other communities around the country to follow.

Stewart applied to the Internal Revenue Service and after a lengthy review process got the organization designated as a 501(c)(3) charitable organization allowing for tax-deductible contributions.  During 2014 Stewart lobbied influential local citizens to join a board of directors to form a new corporation to take responsibility for maintaining the presence of Philipstown.info and The Paper.

The Philipstown Info Inc. board has a statement accompanying this obituary.

Stewart also founded and directed productions with the World’s End Theater Company, helped breathe new life into the Philipstown Depot Theatre and played a leadership role in building financial support and art-world recognition for the Garrison Arts Center. He organized and helped fund a special program to invite leading artists to show work at the center and meet with local artists. 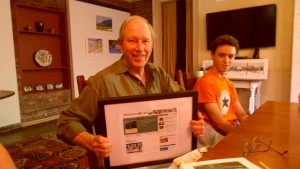 Stewart receiving a framed memento of the website Philipstown.info

Stewart directed and conducted a production of John Gay’s The Beggar’s Opera in 2012, turning the Depot Theatre into 18th-century Newgate and giving the audience a perspective on the power of satire. Of all his projects and achievements, the one that Stewart valued most was his production of Handel’s Messiah last December in St. Mary’s Episcopal Church.  After studying Handel’s score intensely and assembling a group of world-class musicians and singers, Stewart conducted two memorable performances that embodied for Philipstown the beauty of composition, harmony, leadership and community.

John Plummer, Stewart’s co-founder of World’s End Theater, called Gordon “a man of uncommon vision, blistering intelligence and boundless compassion. To borrow from the greatest theater classic of all time, ‘He was a man. Take him for all in all. I shall not look upon his like again.’”

The Cold Spring Area Chamber of Commerce named him the Business Person of the Year in 2013.

Among his proudest associations was his membership in Cold Spring Volunteer Fire Company No. 1. Stewart answered emergency calls as a trained fire/police member deployed to direct traffic at fire and accident scenes or large public events. He regularly attended meetings of the company and happily marched in parades in uniform. 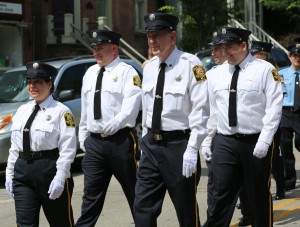 Gordon Stewart, center in the Fourth of July 2013 parade

He was a man whose life included various and enriching paths, interests and pursuits. Before he moved to Philipstown, Stewart’s career path took him on a long and winding road from his Chicago birthplace to, among other places, Vienna, Los Angeles, Washington, D.C., and New York City. Along the way he studied in graduate programs focusing on literature, history and music. At various times he was a theater and film director, a screenplay writer, a trained concert conductor, a mayoral aide, a presidential speechwriter, a stock exchange official, the CEO of a major insurance trade association and the chairman of a pension management firm.

Throughout much of his life Stewart was also a knowledgeable and savvy collector of art. He spoke German fluently.

Stewart’s intellectual curiosity and willingness to engage with all social sectors and all manner of community endeavors made him influential in creating or redirecting local organizations and public attitudes in Philipstown.

To every project in which he was involved, Stewart brought an extraordinary depth of knowledge, both academic and experiential, to bear on it. His energy and drive were infectious, at times nearly overwhelming in their boundlessness.  Stewart always made time for local engagement and impromptu discussion with local officials and fellow citizens, whether he met them in the Foodtown parking lot, outside Main Street shops or at fundraisers and parties. 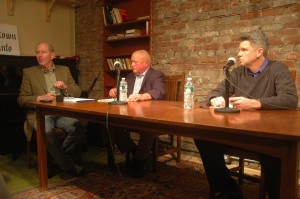 A single conversation with Gordon Stewart might include a comparison of Beethoven and Handel, changes in NATO political and military strategy in light of the new Russian threat in Ukraine, the need for developing a new American social security safety net, and of course the need for community supported professional journalism — all projects he was actively working on in the last year of his life.

Stewart was comfortable speaking with anyone, regardless of their role in the community, as long as they were prepared to accept the consequences of his reaction to whatever they had to say. The man absorbed the details of everything around him and subjected them to serious consideration. Whether the commonplace or the extraordinary, civic, political, cultural, social or personal, he reveled in the details of life in his local community, the direction of the country and the fate of the world. 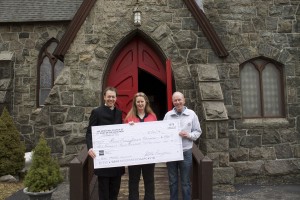 Stewart donates proceeds of The Messiah in 2013 to St. Mary’s church and local food pantry

After a stint teaching literature and drama at Amherst College, Stewart moved to New York City to pursue drama and politics. Writing speeches for notable people led to work as chief speechwriter and executive assistant for New York City Mayor John Lindsay from 1971-73. Later in the decade he was involved in a New York state gubernatorial race and then the successful campaign of Jimmy Carter for president.

During the same decade he had moved to the West Coast where he worked as a screenwriter in Hollywood. He was also asked to direct the first New York City performance of The Elephant Man.

In 1978 he was appointed as deputy chief speechwriter to President Carter. Stewart was especially proud of his Carter association. He often regaled Philipstown.info staff with stories of high drama and low humor in the Oval Office and corridors of the White House.

Following his years on the White House staff, Stewart’s career continued in the intersections of politics, business and art. He was a vice president of the American Stock Exchange from 1982-89.

From 1991 to 2006 he was president of the Insurance Information Institute, an influential property and casualty trade group in New York.

Since 2010 Stewart had been the chairman of the Named Fiduciaries of the Pension Plan for Insurance Organizations, one of the largest multiple employer pension plans in the United States. He also served for many years with The Geneva Association for the Study of Insurance Economics based in Switzerland.

When he died, Stewart was working on this year’s reprise of Messiah, which is still scheduled for Sunday, Dec. 21. The two performances that day will be presented in his honor.

A person of many facets, Stewart was one of a kind. Although now absent from our day-to-day existence, his presence in this publication, in his family and in this community lives on. He is fondly remembered and sincerely missed.