To put it mildly, 2015 is going to be one very busy year for the Cold Spring Village Board. Trustees and village staff face an unprecedented number of capital projects, a list that includes repairs to dams at the village reservoirs, Main Street improvements, modernization of the wastewater treatment plant and works at the West Street and Market Street pumping stations. While senior government grants will help to a degree, local residents will foot most of the bill, mainly through user fees and in some cases property taxes.

Other significant projects will pose additional challenges. The million-dollar cleanup of toxic coal tar in the area of the Cold Spring Boat Club is being funded by the New York State Department of Environmental Conservation but will inevitably disrupt village life for several weeks. It will also result in the demolition of the Boat Club building. Numerous questions remain as to how that structure will be replaced.

The village is also close to reaching an agreement with the New York State Office of Parks, Recreation and Historic Preservation, which will see it take over management of Dockside Park. No development of the site is planned yet but simply maintaining the riverfront park will require at least some expenditure of funds. Detailed planning of the park’s future will also come with a price.

And to all of the above, add a March election. Seats on the Village Board currently held by Mayor Ralph Falloon, Deputy Mayor Bruce Campbell and Trustee Stephanie Hawkins will be up for grabs. It is not yet known if all the incumbents will seek reelection or what new candidates might emerge. Whoever seeks to represent village taxpayers will surely face questions regarding their ability to provide leadership through what is bound to be a pivotal two years.

Water and sewer projects such as the reservoir dam repairs and upgrading of the wastewater treatment plant are funded through user fees. The more water residents and businesses use, the more they pay. The cost of Cold Spring’s water-related projects is reduced somewhat by most Nelsonville residents and a small number of Philipstown residents just outside the villages who purchase their water from Cold Spring at a premium rate.

Sewer-related projects on the other hand are funded solely by Cold Spring residents and businesses since Nelsonville is not part of the sanitary sewer system.

Major capital improvements are generally funded through municipal bonds that usually spread project costs over a 20- to 30-year period. Prior to issuing bonds, municipalities often instead issue Bond Anticipation Notes (BAN), purchased in one-year intervals, a technique that enables them to later combine several capital projects into a single bond initiative, resulting in cost savings.

Village Accountant Ellen Mageean told The Paper that if all goes as planned, once an existing bond is paid off in 2017, a new bond will be issued to cover the cost of Cold Spring’s upcoming capital projects. The existing bond costs the village $185,000 a year in principal payments. Until that bond is paid in full, BANs, a number of which have already been budgeted for, will be used to fund the upcoming projects.

Constructed in the mid-19th century to serve the West Point Foundry and taken over by the Village of Cold Spring in the 1920s, the reservoirs located off Lake Surprise Road two miles above Cold Spring hold the village water supply. In 2011, the cost of repairs needed to the upper and lower dams there was estimated at $2.5 million.

While those repairs are being carried out, water for the villages will be drawn from the Catskill Aqueduct, which passes by Nelsonville near the intersection of Fishkill Road and Route 301. The $120,000 cost of tapping into the aqueduct, which supplies water to New York City, has already been budgeted as part of an existing BAN. Repairs will begin once the NYC Department of Environmental Protection approves the connection to the aqueduct.

Major upgrades at the wastewater treatment plant on Fair Street could begin as early as March, according to Water and Sewer Superintendent Greg Phillips. The price tag for the project is $1.2 million and will include construction of a new building, upgrades to the electrical system and installation of new generators and aeration system. 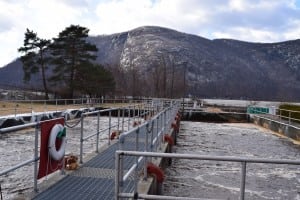 Upgrades at the wastewater treatment plant will replace equipment that is more than 40 years old and will include installation of a new aeration system.

The work will replace equipment that is more than 40 years old and will alleviate life and safety issues at the plant. The project will also produce long-term savings through the reduced operating costs. Initial funding for the upgrades was included in a BAN issued in 2014.

The Federal Emergency Management Agency is to fund $100,000 of the cost of moving the West Street pumping station to a new location on New Street, a move necessitated by damage caused by Hurricane Sandy in 2012. According to Phillips, approximately $10,000 from the Village Sewer Fund, financed through user fees, will also go toward the project.

He said work is expected to begin “as soon as the weather breaks” and should take about three months to complete. The station pumps wastewater from lower Main Street to the treatment plant on Fair Street.

Replacement of a small pumping station on Market Street will cost an estimated $120,000, an expenditure that was included in the BAN purchased in 2014. The project is being coordinated with the Metropolitan Transportation Authority and will likely be completed this summer.

Much-needed and long-awaited improvements to Cold Spring’s sidewalks should finally become a reality this year. Eighty percent of the $970,000 Main Street project is being funded through a federal grant administered by the New York State Department of Transportation. The remaining 20 percent, approximately $194,000, will be paid for by the Village of Cold Spring and is already included in the 2015 budget. 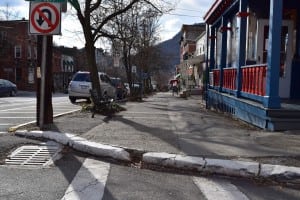 Much-needed repairs to village sidewalks and curbs are expected to be completed this year.

Campbell told The Paper that while the project will not result in new sidewalks along the entire length of Main Street, an undertaking that he said would cost “millions of dollars,” it will replace numerous sections most in need of repair between High Street and the pedestrian tunnel. A number of new curbs along with curb cuts that comply with the Americans with Disabilities Act (ADA) are also planned.

In addition, Campbell said the project will complete paving, sidewalk and curb work on Mountain Avenue and Furnace Street. Campbell will update the Village Board at its Jan. 12 meeting after he receives a report from CHA, the consulting firm doing the design work for the project.

Falloon said he is confident that the formidable list of village projects slated for 2015 can be completed this year or at very least started by year end, “barring red tape.” The Main Street project, which dates back to at least 2010, has at times been a glaring example of the retarding effect of that red tape. Campbell pointed out that at one point the project sat on a desk at the DOT for “six or seven months” without being acted upon.

Falloon added that while the village has responded promptly to requests for information on the project, “unfortunately we can’t control what happens between CHA and DOT” as the consulting firm and state agency grapple with moving the initiative forward.

In the near future, if not already, the need to find new sources of revenue will become acute in a village with fewer than 900 properties on the tax rolls and a growing list of funding needs. A recent proposal by the Cold Spring Fire Company calls for a new three-story, $6 million firehouse on Main Street. The proposal is unlikely to move beyond the talking stage this year, but the conversation will no doubt be intense.

Whatever the final outcome, a new firehouse will be a costly undertaking. How to generate the revenue sources to pay for it and other future projects may be a fitting topic for community-wide discussion as the March election approaches.