Two years after plans to install a residential wind turbine in Garrison provoked a major controversy, Philipstown residents favoring or opposing such backyard “windmills” will get a fresh chance to voice their opinions when the Town Board convenes a public hearing Jan. 28.

At its formal monthly meeting Thursday night (Jan. 8), the Philipstown Town Board scheduled the hearing on a proposed new law designed to cover small-scale, power-generating turbines. Under the draft law, intended as an amendment to the zoning code adopted in 2011, each wind turbine would require a minimum lot area of one acre, and only one per lot would be permitted.

The board’s action is the latest development in a series that began in 2012 with the application for the wind turbine at a Garrison residence — an idea that sparked intense public interest. The Philipstown Zoning Board of Appeals (ZBA) eventually approved the Garrison project, but the protracted debate before both the ZBA and Town Board and the realization that town law did not adequately address such matters prompted the Town Board in November 2013 to declare a moratorium on further wind turbines and to research ways to regulate them.

The result is the proposed law “to better regulate the construction and use of wind energy conversion systems” — the long name for wind turbines. However, more briefly, it also discusses aspects of solar energy systems.

As provided in the draft law, along with meeting the acreage rule, wind turbines could not exceed 40 feet in height. Likewise, the draft mandates that such “accessory uses” comply with other town rules and “not create noise, traffic, dust, odor, or other impacts that exceed those normally associated with single-family residential uses.”

Furthermore, according to the draft law:

In addition, the draft demands that if a wind energy conversion system or a solar energy facility is intended to generate electricity primarily for off-site consumption, rather than home use, its sponsors must obtain a special permit from the town Zoning Board of Appeals.

Given copies of the draft law to review last November, both the Philipstown Planning Board and the Putnam County Department of Planning, Development and Public Transportation found the draft acceptable and suggested no changes.

Scheduling the public hearing was one item on a long list of decisions by the board as it completed tasks in separate back-to-back meetings Thursday night.

During the first meeting, the annual pro forma reorganization session, by unanimous votes the board:

The board also continued its practice, begun in 2014, of picking not one but two print newspapers for disseminating town announcements. It designated The Putnam County News and Recorder as the “paper of record” but also specified that “simultaneously all legal notices and similar item of information will be sent to Philipstown.info/The Paper.” New York state law demands that a municipality publish legal notices in a newspaper with a paid circulation (one whose readers buy a subscription); the PCNR meets that criterion. By contrast, The Paper is distributed free of charge.

The board also chose a new face for an “old” duty — serving as the town’s official historian. Board members named town resident Mark Forlow to succeed Donald MacDonald, who had long held the position, as historian. “No one could oppose Mark Forlow. He’s great!” Shea pronounced, before the vote. At its Jan. 13 meeting, the Village Board also appointed Forlow as village historian.

During its formal monthly meeting, along with scheduling a hearing on the wind turbine law, the board passed resolutions honoring Robert Dean and Steven Casement, who achieved the rank of Eagle Scout, the Boy Scouts’ highest award. They both provided community service to the town. Dean built permanent wooden and concrete benches along the walking trail around Quarry Pond at the North Highlands town park. Casement established a sporting gear and wear “swap room” at the town Recreation Department’s community center in Garrison, allowing families to exchange such things as baseball bats or hockey and lacrosse equipment. 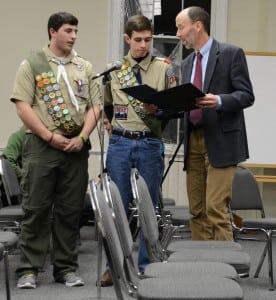