There’s nothing like a major snowfall to foster regressive behaviors of all sorts — snow angels and snowball fights are merely the tip of the iceberg.

The buildup to and execution of this season’s first major bombogenesis triggered my full gamut of coping mechanisms.

Once beyond the initial denial and suppression — “This can’t be happening again; no, it’s not!” — I abandoned mature survival strategies and reverted to patterns of behavior from earlier development phases. But recognizing the futility of my initial impulses to sulk and/or cry moved me solidly into sublimation: There’s got to be a better way to handle this!

And, as this is a column about food and cooking, you would be right to assume that my go-to regression is orally fixated, with a soupçon of intellectualization and fantasy/play.

Which somehow led me to this week’s obsession with milk and meat and comfort food spawned by the memory of a particular pork shoulder — braised for hours in whole milk, seasoned simply with smashed garlic cloves and sage leaves. If not an outright cure for this uncommon cold, it certainly offers a heart- and hearth-warming distraction or sublimation of less skillful impulses.

There’s no avoiding it: This recipe is definitely not kosher, combining both dairy and pork, but it does have a historically ancient, if hazy, Italian pedigree.

Food writer David Downie points to Etruscan roots: Without refrigeration, meat was preserved by salting, and to remove the salt and tenderize the flesh, plus slightly sweeten the dish, the meat was braised, or more likely simply boiled, in milk. A Roman improvement on the antique recipe called for browning the meat first then adding the boiling milk. 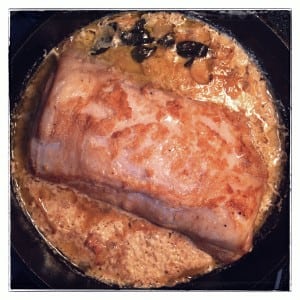 That basic version will produce the results you get with most any other takes on the recipe: The pork is so moist and tender it could pass for veal, the milk reduced from its long braise to a nutty, caramelized, almost-cheesy sauce of loose curds. It’s not much to look at, but 2,500 years after the fact, there’s a reason it’s still appealing.

This is where the intellectualization and fantasy/play comes in: refinement. Most contemporary recipes nod to Marcella Hazan’s Bolognese-style recipe, seasoned with only salt and pepper and cooked stovetop. Molly Stevens’ carefree oven-braised preparation makes more sense in that you can maintain a constant temperature over the long cooking time.

As for additional seasonings and this being pork, garlic is a no-brainer, and while many recipes suggest an overnight rub and seasoning of either rosemary or sage, it seems to me that due to the long cooking time simply sweating the seasonings in a little butter before adding the milk infuses the flavors sufficiently. Rose Gray and Ruth Rogers’ addition of wide strips of lemon zest made uncommonly good sense to me, so I incorporated it.

And although it’s certainly not necessary, a couple of recipes propose the addition of cream to the milk in approximation of a purer, less-processed blend, which in turn suggested a grating of nutmeg, another subtle but qualitative improvement. I also suggest really processing the sauce: After removing the roast, a serious reduction and constant whisking (I even did a quick pass through a mesh strainer) produce a smooth, creamy sauce, which begs for a side of roasted potatoes, farro or even pasta. Daniel Boulud’s suggestion of a chopped, toasted hazelnut garnish is again unnecessary but note-perfect.

Preheat oven to 275 degrees. Heat the olive oil in a 3- to 4-quart ovenproof Dutch oven or roaster (with lid), large enough to fit the roast comfortably. When the oil is hot, brown the meat, turning so that it browns evenly on all sides (15 minutes max).

Remove the pot from the heat and remove the roast to a plate. Drain any accumulated fat or oil from the pan and wipe it with a couple of paper towels to remove any loose crud. Return it to a medium flame and add the butter. When the foam subsides, add the smashed garlic cloves and toss to cook for 2 minutes or so. Add the sage and lemon peel and stir for another minute. Add the 2 cups of milk and 1 ½ cups of the cream and bring it to a simmer. Add the nutmeg and pepper and about 1 teaspoon of coarse salt.

Once the liquid is at a steady simmer, add the roast, fat side up. Cover the pot tightly and put it in the lower third of the warmed oven. After 10 or 15 minutes, check to see that it is not boiling too hard. If it is, lower the temperature 10 to 15 degrees, re-cover and return to the oven for
45 minutes.

At the 45-minute mark, flip the roast. The milk will have begun to color and form loose curds. Re-cover, leaving the lid slightly ajar to allow the liquid to begin reducing. Baste the roast with the liquid every 15 to 20 minutes, cooking at least another 45 minutes or up to 1 ½ hours.

Remove from the oven and extract the roast, keeping it warm, by covering in foil. Remove any remaining lemon zest or sage leaves and skim as much of the clear fat and oil off the surface of the braise and return the pot to the stovetop. Carefully boil the liquid to reduce it by half, whisking as you go to smooth it out. Add another tablespoon or two of cream at the end to further smooth it. Correct the seasoning.

Slice the roast generously and top with the sauce. Sprinkle with chopped nuts and serve.