Editor’s note: Healing Facials is no longer in business.

Joan Forlow’s new business has a two-word name: Healing Facials, and both of those words are equally descriptive of the treatments she is offering. Although she can divide the phrase in two and provide a traditional facial minus the healing aspects, and vice versa, Forlow’s specialty is a combination of the two.

Stepping into the serene space — an anomaly within the complex of very different kinds of businesses (including Best Blueprint and Monteleone Contracting) — that occupy the complex on Route 9, there is an instant transition from the world outside, made more so through Forlow’s warm, engaging manner as she welcomes clients.

After a couple of decades spent studying both the science and the spiritual components of her craft, this is Forlow’s first venture on her own.

“I believe that we get ‘full,’ ” she said. “When you see someone unhappy, they haven’t learned the tools to release these burdens. Folks run on automatic; there are so many medications, which are just a Band-Aid. That’s why I have brought together a New York state license with knowledge of the skin, marrying it to all the tools I’ve collected in other areas.”

First and foremost, Forlow is a licensed skin care therapist, having the requisite 600 hours’ training required for a New York state esthetics license. A self-described “seeker,” she followed a circuitous path to get there.

Growing up in Rockland County, she was initially interested in theater, but her father “wasn’t so happy about that, so I wound up with a B.A. in communications from St. Thomas Aquinas, and then worked in advertising, PR, administration and sales and eventually got into doing voiceovers when a producer happened to love my voice.” 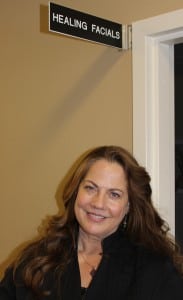 Concurrent with all of this was Forlow’s other path: She started meditating while in her 20s, after a New Age center opened near where she was living, because “I just knew I had to find a way; my goal was to awaken fully … I believe that when you’re ready, your teacher appears.”

That teacher, for Forlow, was Gurumayi Chidvilasananda, a master, or guru, of Siddha yoga. These teachings have been “the greatest gift of all; I never disconnect from it,” Forlow said.

She also studied Reiki, which she describes as “an ancient path; it’s about being a channel of the unusual healing life-force energy. It’s about learning how to get out of the way so you can truly serve the one in need — a hands-on healing. You study, learn how to heal yourself first, and it builds over time. When the student is ready, the path appears. I’ve embraced it; I don’t know what life is without Reiki.”

After marrying her husband, Mark, in 1994 (they attended the same high school together but only got friendly after re-meeting through friends as adults), she relocated to Cold Spring, where he owned a piece of land. After the birth of their son, wanting to spend time with him, Forlow segued from office work to caring for children from her home, all the while maintaining her personal yoga practice.

At the time, the amount of yoga teachers per square mile in Philipstown wasn’t remotely close to the density it is today, and when approached by a then-pregnant friend, Patti Pelican, to take over the yoga class Pelican had been teaching, with the instruction of “You’ll be great — just make a list of the positions,” despite trepidations, Forlow turned to teaching.

“I am so happy I did — I received so much from those years of sharing the gifts of yoga,” she recalled, particularly noting the candlelit classes she taught at St. Mary’s Parish Hall, “being open, letting go in such a sacred, holy place was very beautiful.”

Eventually, Forlow shifted back into a more traditional career of sorts, finding a “concierge” job at Northern Westchester Hospital and then shifting to the plastics and reconstruction department.

It was there, working with an esthetician, that Forlow found her next path: “I liked what she did. A plastic surgeon left the hospital and I followed, becoming her medical esthetician,” something Forlow still does, working two days a week at the SpaChiara Wellness Center in Mount Kisco.

The study of esthetics, which Forlow embarked upon, involves “a lot of science: chemistry, anatomy, biology and protocols, things like cleansing and sterilizing,” she described. On top of her first certification, Forlow wanted more.

“For me, it was not enough, so I went for another six months to the Dermalogica Institute in New York City, where I was trained more fully in the science and art of skin care. After an initial period working within a spa in Fishkill, Forlow has now embarked on her first solo venture with Healing Facials.

Forlow offers several kinds of healing facials, each including a skin analysis at the start: a one-hour “one touch” version for $60, a 90-minute “signature” with a choice of deep cleansing, age reversal or ultra-calm techniques for $80, or the two-hour “masque, touch,” which includes the arms and head plus a therapy of your choice, for $100. She also offers a back treatment, including a cleaning, hotel towels, exfoliation, masque and rub. 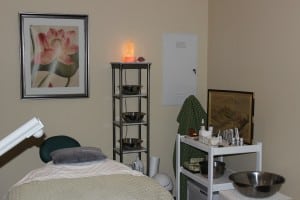 A corner of the Healing Facials’ room

All of the healing facials are conducted in an atmosphere akin to a massage therapy session, with dimmed lighting and tranquil, soothing music. As Forlow alternates, depending on the specific treatment, various creams with hot towels, she also encourages and guides breathing patterns with long exhalations designed to relax the client.

Throughout, Forlow quietly offers encouraging and supportive words to accompany the application of the elements of the treatment. At the end, candles are blown out and there is no trace left so that “when you come back again, it’s a completely fresh start,” Forlow explained.

Soon, Forlow intends to invite those clients who have come and enjoyed the healing facials to the space in the evening, once or twice a week, for “gentle stretching, creative meditations — it’s a nice way for me to say thank you for being committed to your glow inside.”

Forlow called herself “blessed to be doing what I love. I’ve worked hard to get to this place where I feel really at home, fulfilled, and I’m excited to share my practice with the community. Anything that I’ve done has been to find relief, to get me to a joyful place. I want to share that with others. I want a place where people can get unburdened in a very safe, warm and healthy environment.”

One thought on “Healing Facials Combine Skin Treatments and Serenity”