What do a bobcat, a barred owl and a red-bellied woodpecker have in common? They were all seen recently feeding on the carcass of a deer leg strung 20 feet up in a hemlock tree and photographed by a motion-detecting trail camera wired onto the trunk. 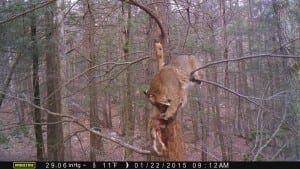 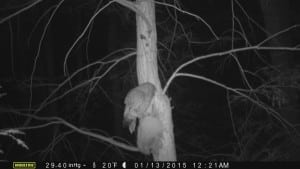 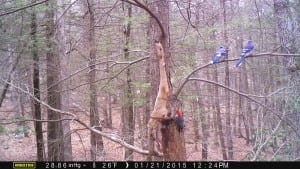 This unlikely trio of animals was not all present at the same time, of course, but discoveries like this, which defy the predictable in terms of just what local animals may show up for a free meal, are becoming more common as wildlife biologists collect images from well-placed trail cameras where a small mountain of free food is hard to resist.

Motion-detecting cameras were first used by scientists to study truly rare animals like snow leopards, but inexpensive models are now being used much more commonly by naturalists and backyard amateurs as well, and this winter at least three teams of local New York State Park biologists are collecting a fascinating array of images from their cameras’ isolated locations in area parklands. 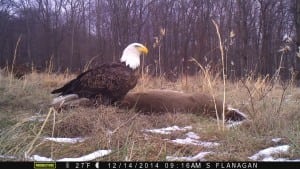 Max Garfinkel, Haldane alum and a field biologist, said his team from Bear Mountain has been trying to get photos of an elusive tree-climbing weasel named a fisher, so they tied a large deer leg they had cut from a carcass up onto the trunk of a tree in Sterling Forest. “So far we haven’t seen any fishers, unfortunately, but we did get photos of a bobcat up there in the daytime, which is pretty unusual, and a whole bunch of other creatures too, including a blue jay, a chickadee, a junco, a red-bellied woodpecker and a squirrel.”

Over on Duck Pond in Fahnestock State Park, naturalists from Taconic Outdoor Education Center have placed road-killed deer carcasses on the thick ice for the third winter in a row and have mounted a trail camera nearby to capture a parade of both daytime and nocturnal visitors. Said Program Director John Stowell, “This year, we got photos of two red-tailed hawks fighting each other off to get to the carcass … pretty cool!” 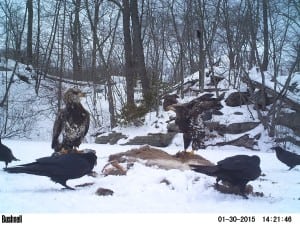 Ravens and crows are usually the first animals to respond to the meat, and then eagles, hawks and vultures show up, and finally the more wary ones like bobcats, foxes and coyotes.

Zoologist Ed McGowan, supervisor of the Bear Mountain Zoo as well as scientific research in Harriman and Bear Mountain State Parks, has reflected upon the advent of trail cameras and what we’re learning from the often-surprising images we collect off their convenient SD cards.

“We all know a lot about African animals, like lions and other predators, from growing up watching all those nature TV programs. But here in the thickly wooded eastern forest, we really don’t know what happens,” he said. “One thing that’s being revealed,” he continued, “is that cryptic animals like bobcats are more common than we thought. We’ve also seen that multiple species will feed in close proximity to each other, which is certainly not typical. I’ve seen photos of a fox feeding on one end of a deer and a raccoon on the other. Or eagles and ravens and vultures all within a few yards of each other. The images also give us a sense of how important deer meat is to them, especially during a winter as cold as this one.” 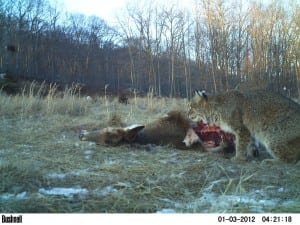 Stowell said that his educators are learning something about the personalities of the animals that come to the carcasses. “Coyotes are shy and careful. They’re so smart. They sense that something is weird or different about the setup of the carcasses, so they’re not the first to come in to feed. But then they see the crows and the ravens and probably figure it’s OK.”

Traditional questions and assumptions about dominance and hierarchy are also being pondered. “We put a dead deer in a big open field,” said Ed McGowan, “that we thought would appeal to eagles, and we were thrilled to see a rare golden eagle show up. Then the bald eagles came in, but the golden defended the carcass. Goldens, it turns out, are usually the boss.” 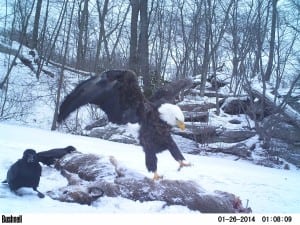 McGowan went on to describe a scene captured on another camera setup that showed an opossum walking straight into a carcass that had already been discovered by a bobcat and a coyote, who were standing just yards away. “He just walked in, impervious, right between them. How about that?!”

One thought on “Camera Catches Carrion Carried Off”