By a 4-0 vote of his new colleagues, Philipstown resident Robert Flaherty became the newest member of the Philipstown Town Board last Thursday night (May 7), filling a vacancy left when Dave Merandy resigned after being elected mayor of Cold Spring in March. 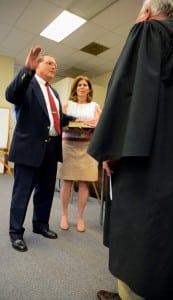 Assisted by his wife, Annette, Robert Flaherty takes the oath of office as a member of the Philipstown Town Board.

Senior project manager in its New York City office for ePlus Technology Inc., which provides expertise in information management and related fields to businesses, governments and educational institutions, Flaherty brings to the board a record of volunteerism as a North Highlands Fire Department member, Knights of Columbus treasurer, parishioner of Our Lady of Loretto Church and leader of Little League and Pop Warner football youth programs. He has lived in Philipstown for 54 of his 55 years.

“I couldn’t be more pleased to be doing this, this evening. We have a really great person coming on board,” Shea said as the board voted.

Flanked by his wife, Annette, with daughters Rachel and Kelsey watching near by, he took the oath of office, administered by Philipstown Justice Court Judge Alan Steiner.

After claiming his place on the dais, alongside Councilors Mike Leonard, Nancy Montgomery and John Van Tassel, and Supervisor Richard Shea, Flaherty thanked them “for having the trust and confidence in me for this appointment. I’m going to work hard for the Town Board and the local community to earn and keep that trust. I’m very pleased, honored and excited about this position.”

“And we’re going to put him to the task,” Shea added.

The Town Board consists of the supervisor and four “councilmen/women” or “councilors.” 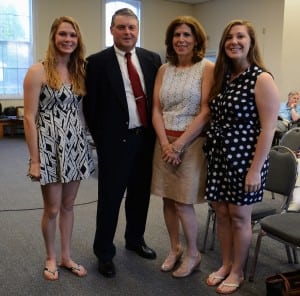 Shea and the board spent more than a month considering the choice of a successor to Merandy, who was elected to the Town Board in November 2011 for a four-year term scheduled to end in December. At the meeting, Flaherty did not say whether he intends to seek election in his own right this fall. The terms of Montgomery and Shea conclude at the end of the year; they could seek another four years as a councilor and two years as supervisor, respectively, in the general election.