Dave Merandy won convincingly in the race for the mayor’s office in Cold Spring’s Wednesday (March 18) election, defeating his opponent Barney Molloy by a vote count of 454 to 261.

In the battle for two trustee seats, Marie Early, Merandy’s running mate, collected 508 votes, the most among the five candidates. Fran Murphy garnered 500 votes to claim the second trustee seat. Bob Ferris, who teamed up with Molloy, received 257 votes. 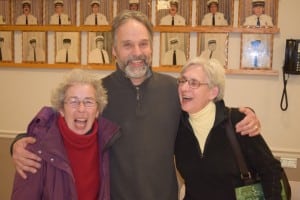 Marie Early, Dave Merandy and Fran Murphy were all smiles when the results were announced.

The vote totals are unofficial and will be confirmed by the Putnam County Board of Elections, which ran the Cold Spring election for the first time. The village had run its own elections previously. The wide margins of victory mean that the 79 absentee ballots that are yet to be counted will not affect the outcome.

Polls closed at 9 p.m. and The Paper spoke with the winning candidates immediately after the results were announced at the Cold Spring firehouse.

“I’m just glad. I’m relieved,” was how Mayor-elect Merandy reacted to his win. “I had a lot of people behind me and I’m happy for them. People worked really, really hard. They were incredible.”

Asked if he was surprised by the strength of his victory he said: “I didn’t know what it would be. I’ve been in a bunch [of elections] and you never know. You feel like you have a lot [of support] but you really don’t know until the end.”

Merandy said he felt that he and running mate Early appealed to a broad cross section of voters. “I just think we pulled from all the demographics,” he commented. He also said that letters of support from other community leaders published in local papers were a significant factor. “The letters from Anthony Phillips, Joe Curto and Mark Villanti were really big,” he said. 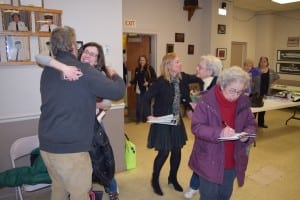 Dave Merandy gets a hug fron his wife Stephanie Hawkins while Marie Early (right) pours over the numbers one more time and Fran Murphy, second from right, receives congratulations.

Assessing the campaign overall, Merandy said: “It was a lot quieter than others. Not a lot of rumor mill. Not a lot of nastiness. Everyone just got to work.” His first meeting as Cold Spring’s mayor will be April 7. He said he will speak to Supervisor Richard Shea regarding his resignation from the Philipstown Town Board.

“I think people believed in us. I think we had their trust,” Early commented moments after hearing the results. “We were clear about what we want to accomplish, in very specific terms, and I think people embraced that. I think the numbers reflect that,” she said.

Early said she was “incredibly surprised” by the margin of her and Merandy’s win. “We were expecting to have to wait until next week for the absentee ballots.” She seemed eager to get to work. “I think it’s going to be delightful working with Fran and … what’s his name? … Dave!” she said. “I’m looking forward to that. It will be good.”

Murphy did not take a win for granted. “The margin really surprised me,” she said, adding that, if anything, as the campaign went on she felt that things might have been going “the other way.” The first-time candidate also said she didn’t mind how much work it took to get elected. “It was enjoyable,” she said. “I knocked on every door and I learned a lot about the village.”

Molloy was not present at the firehouse when the results were announced. The Paper attempted to contact him and Ferris on Thursday morning but had received no response by press time.