Philipstown Town Supervisor Richard Shea Thursday night (June 4) blasted the Putnam County Board of Health for a “campaign of harassment” regarding home construction projects but expressed hopes that the dispute — supposedly settled earlier this year — has finally ended.

He spoke out at the Philipstown Town Board’s formal monthly meeting at Town Hall. Although relatively short, the meeting again covered a detailed and diverse range of topics — ambulance corps operations, relations with the U.S. Postal Service, making Philipstown a “Purple Heart community,” and more.

The board took no action on a drainage project on South Mountain Pass, except to schedule a vote on it for next Wednesday (June 10). Board members held a workshop this past Wednesday night (June 3) on the proposed work and paving of a section of the road. (See: “To Pave or Not to Pave: Citizens Express Views,” June 6, 2015.)

Differences with Board of Health

Shea revisited an issue that surfaced briefly in early spring when the county Board of Health/Health Department alleged a Philipstown failure to adhere to established policies on referrals and follow other protocols on oversight of home construction projects, such as additions to existing structures. Conversations and a meeting with a judge followed, and the jurisdictional disagreement quickly seemed over; Shea reported April 9 that town and county had established clarity in their procedures and “so we put that issue thoroughly to bed.”

After the dust-up, Shea said Thursday night, “We came into full compliance with their [county] policy, which at times appears to be in conflict with the New York State Building Code,” and he thought everyone “had agreed to move on from this.” However, activity by Health Department officials apparently continued behind the scenes. 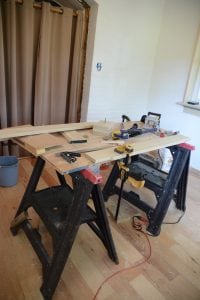 Government protocols on oversight of homeowner projects, including upgrades and room additions, loomed large in a dispute between Philipstown and Putnam County discussed by Town Supervisor Richard Shea June 4.
Photo by L.S. Armstrong

“Most recently,” Shea said Thursday, “they took it upon themselves to go out and start reviewing past certificates of occupancy and in my mind sort of harassing our residents, dragging them in, telling them they were going to revoke the certificate of occupancy,” a vital document giving a governmental sign-off on a home project.

As Shea explained it, the county often focused on additional rooms, often created in basements, and typically regarded all such chambers as bedrooms (which must meet certain standards), ignoring the possibility of home offices, media dens or workout rooms. Board of Health staff “were retroactively going back and reviewing 19 permits that had certificates of occupancy,” he said. “In the end, after the campaign of harassment, not a single violation [notice] was issued. None of it was borne out. So I’m hoping the issue has been laid to rest.”

He emphasized that the town refers projects to the Board of Health “when by their guidelines we need to” and criticized the county rules’ ambiguous nature. “It’s guidelines; these things haven’t been codified” as law, Shea said. Meanwhile, in Philipstown “we have a local code. We have the New York State Building Code. These are the laws we follow.”

The Board of Health/Health Department website tells residents that “any room which could potentially be used as a bedroom may be considered a bedroom by the department,” including “an office, den, computer room, exercise room and possibly a family room … The location of the proposed room is a major factor in this consideration” — as in the case of an office located on a second floor alongside bedrooms.

The website also states that some Health Department approvals hinge in part on “the calculation of the potential occupancy of the residence. This is determined by the number of potential bedrooms.” Furthermore, the website cautions, “floor plans for renovations or additions must be reviewed” — by whom is not clear — “to ensure the total number of potential bedrooms are the same as the original certificate of occupancy.”

Board of Health officials did not immediately respond to a Philipstown.info e-mail sent Friday afternoon seeking their comments on the issue.

This is not the only incident in 2015 — an election year — in which the Board of Health sparred with a town supervisor on the western side of Putnam County. Also this spring, Dr. Allen Beals, the health commissioner, clashed bitterly with Putnam Valley Supervisor Bob Tendy over the tax assessment on Beals’ Putnam Valley home, a new front in an ongoing Beals-Tendy battle that stemmed in part from the Health Department’s 2014 closure of a Putnam Valley beach.

Shea is a Democrat. Like Beals, Tendy is a Republican, albeit a dissident Republican, challenging the Putnam GOP favorite for district attorney, incumbent District Attorney Adam Levy.

Likewise, he said, “Garrison ambulance feels it’s not fair that the taxpayer dollars are paying for an EMT and this EMT is going to Putnam Valley, and Philipstown ambulance is coming to cover Garrison.” He said Shea had conferred with Tendy, he himself had talked to a Putnam Valley Town Board member, and that with changes at the Putnam Valley corps, after only two weeks “there seems to be a dramatic increase in their manpower, so we hoping it’s going to correct itself.” He promised to inform the board of further developments.

Councilor Robert Flaherty mentioned ongoing neighbor dissatisfaction with U.S. Postal Service activities in Garrison and his discussion there with a post office official, who said that bright lights were no longer operating at night and that USPS truck deliveries had not actually increased after the downsizing of the Cold Spring post office. Flaherty proposed further consultations with District 1 Putnam County Legislator Barbara Scuccimarra and Shea suggested contacting Rep. Sean Patrick Maloney as well, given his prior intervention.

“We will vigorously defend the residents” around the Garrison post office, Shea pledged. “That was a residential neighborhood.” 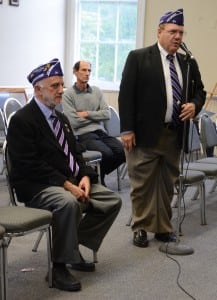 Purple Heart veterans Eugene Lang and Neil Gross, at the microphone, invite the Town Board to make Philipstown a Purple Heart community. Photo by L.S. Armstrong

The meeting opened with a visit by Retired Sgt. Eugene Lang and Retired Lt. Col. Neil Gross, veterans from Chapter 21 of the Military Order of the Purple Heart, who urged that Philipstown become an official Purple Heart municipality, similar to the county, and formally recognize the contributions of those wounded or killed in war.

“I’m proud to stand before this Town Board … and I’m proud of this whole county,” the first in New York to become a Purple Heart county, said Gross, commander of Chapter 21, which serves Putnam and Westchester counties.

“We will be a Purple Heart community, absolutely,” Shea replied. “There’s a deep understanding here” of the sacrifices made by members of the military, as the huge turnout at the annual Philipstown Memorial Day commemoration attests, he said.