Disagreeing on the merits of paving part of South Mountain Pass to complement a drainage project, dirt-road residents filled the meeting room of the Philipstown Recreation Center Wednesday (June 3) to make their arguments to the Town Board — and each other.

At a workshop moved from the Town Board’s usual venue, Town Hall, Supervisor Richard Shea and his four colleagues listened and briefly commented but took no immediate action, although they also did not rule out a vote to settle the matter as early as June 4, at the board’s scheduled formal monthly meeting.

Originally expected May 27, the vote, on expanding an already-agreed-upon 600-foot drainage project to include about 710 more linear feet, was postponed when some South Mountain Pass residents objected, after board members spoke of paving a steep section of road as a sequel to the drainage work to ensure the latter did not wash away in heavy storms.

Partially state and federally funded, the drainage system would begin just east of the intersection of Route 9D and South Mountain Pass and extend uphill farther than first anticipated. To accommodate the revision, the board must approve a contractor change order and project price increase, from $129,876 to $250,916.60.

Paving would be separate from the drainage effort, but Shea and other board members describe it as a crucial follow-up. Ronald Gainer, Philipstown’s consulting engineer, told the audience that “only about 2,600 feet of road would be paved. There’s no wholesale plan to pave that road.” He said the slopes in the affected area have grades averaging 10 percent, and more in spots, and “that’s very steep for a gravel road.” 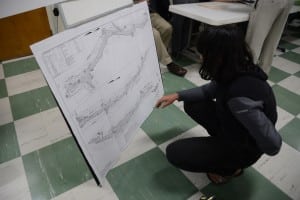 A resident studies charts of the planned drainage work.

Shea cited the expense of replacing drainage and dirt-road sections washed away in heavy storms as well as the environmental “big carbon impact” in trucking dirt-road surface-treatment materials long distances and the “degradation of streams” that results from the downward flow of runoff. “I feel like it’s fiscally responsible to pave that” section of South Mountain Pass. “I’m in favor,” he declared.

Retaining a dirt/gravel surface on such a section “is not cost effective,” Philipstown Highway Superintendent Roger Chirico concurred. “We’re back again and again and again” redoing the work. Likewise, he said, the chemical hardener applied to dirt roads costs 93 cents a gallon. “It’s like taking dollar bills and throwing them up in the air.”

A twining scenic lane interspersed with new and old homes, South Mountain Pass connects Routes 9D and 9, both New York State highways, and runs diagonally for about two miles, with the western, Philipstown end in Putnam County and the southeastern end in Westchester County, in the Town of Cortlandt. One member of the public who spoke noted that the Westchester end of the road is paved.

Susan Choi, too, announced, “I am definitely pro-paving.” She referred to the expenses of time and money being invested in the drainage project. “Why not secure it properly?” Choi also discounted the claims that paving would encourage speeding. “People already go fast on it. It’s not going to matter. I don’t see the real issue of not getting it paved,” she said.

With a different perspective, South Mountain Pass resident Alex Clifton presented a petition with 27 signatures opposing paving and asking that the drainage work also be halted. “We believe paving will make our road more dangerous,” he said. “It will cause more traffic, faster traffic.”

Imogene Drummond remarked that “paving doesn’t ensure that it doesn’t get washed out. I think the solution is to find drainage that works on South Mountain Pass. The solution has to adapt to the situation.” She also urged all sides to acknowledge their basis of agreement — that there’s a problem to fix.

Old Road Society Secretary Madeline Rae read a resolution adopted by her organization’s board Monday (June 1). In emphatic language, it stated that the group “strongly opposes paving along South Mountain Pass” and “further supports the residents of South Mountain Pass in their effort to have alternate solutions considered to address any problematic road conditions.” 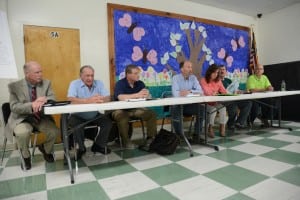 Nick Angell offered an alternate solution — that the Town Board limit its drainage work to the original shorter length and he and other citizens experiment, at their expense, on a stretch beyond that, as a test. “We believe our approach will sharply reduce the risk of washout so paving is not needed to protect the investment,” he said. Not only would South Mountain Pass benefit, but “the town would have a whole other approach” to dirt-road management, Angell said.

While Shea said, “I don’t see any downside” to a public-private initiative and experiment, he doubted the South Mountain Pass drainage project is the place to begin. “We think this project should move forward. We’re not paving three-quarters of the road” but leaving it intact, he reminded everyone.

Raising concerns about safety, Councilor Mike Leonard urged decisive action. “Otherwise we’re going to get more rain and then what are we going to be facing?”

Councilor John Van Tassel suggested that Angell’s idea be tried on a different stretch of South Mountain Pass. He and Councilor Robert Flaherty both specifically endorsed the drainage work and paving.

The fifth board member, Councilor Nancy Montgomery, said she is “looking to solve this in the best way possible” but that after having heard “some great arguments on both sides” was “not convinced either way.”

“My concern is really the environment and what the dirt roads are doing” to it, she added.

For letters in response to the paving proposal, see “Letters: On Paving South Mountain Pass.”