On July 22, the Putnam County News and Recorder (PCNR) published a story asserting that Cold Spring Mayor Dave Merandy and Deputy Mayor Marie Early were conspiring to fire Building Inspector Bill Bujarski and to remove Trustee Michael Bowman from the Village Board. The article came after confidential correspondence from Village Attorney John Furst to village trustees was leaked to the PCNR. The leaked memo summarized Furst’s comments on a number of legal issues that he had discussed with Merandy and Early soon after he had been appointed as legal counsel.

Contacted by The Paper, Merandy described the PCNR article as “laughable — and totally fabricated … there was no truth to it.”

Merandy said the issues discussed in the meeting with Furst included a possible merging of the Cold Spring Building Department with the Town of Philipstown Building Department. Similar discussions were held during Ralph Falloon’s term as mayor but got nowhere.

The mayor said the conversation with Furst was about the implications of such a merger — not an attempt to fire Bujarski. He also said that Bowman’s residency was discussed, but not as part of an effort to remove him from office, rather to determine if the Village Board was at risk legally as a result of Bowman having moved from Cold Spring into Nelsonville earlier this year. Bowman moved in order to care for his mother, who was ill. 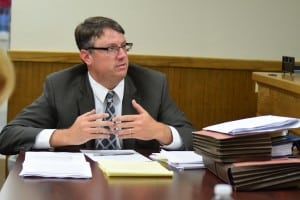 At the Tuesday (July 28) meeting of the Village Board, trustees met in executive session prior to the regular meeting. During the public comment period, Doug Cunningham, editor of the PCNR, asked how the executive session was justified. Merandy deferred to Furst, who very succinctly indicated that the board has the right to speak to its attorney in private when seeking legal advice. No indication was given as to the topics discussed.

Trustees authorized Merandy to sign a long-delayed agreement with the New York State Energy Research and Development Authority (NYSERDA). The contract details how a $62,625 NYSERDA grant will be used to update the Village Code. The grant, first announced in late 2013, was originally for $75,000; however, the amount was reduced when the Historic District Review Board secured other funding to revise its part of the code. Before Tuesday’s vote,

Early outlined final revisions to the wording of the contract, an agreement that had been reviewed and approved by the Code Update Committee in May. Trustees Bowman and Cathryn Fadde voted against the motion, stating that they wanted one more look at the document.

While the contract with NYSERDA has now been finalized, the sticky question as to which consulting firm will work on the project with the Code Update Committee remains unresolved. Initially, the Village Board voted to award the work to Greenplan, the firm that had written the successful grant application. Greenplan did that work pro bono, based on the understanding that if the grant were awarded, it would get the contract to do the code update.

The Village Board at the time voted unanimously to award the work to Greenplan. A subsequent Village Board, however, voted to give the work to the consulting firm Barton & Loguidice. Greenplan responded by presenting the village with a bill for $7,603.75 for its work on the grant application.

After his election last March, Merandy indicated that he wants to turn back the clock and once again award the code update work to Greenplan — an announcement that prompted Code Update Committee Chair Jack Goldstein to resign. A contract has not yet been signed with either consulting firm. 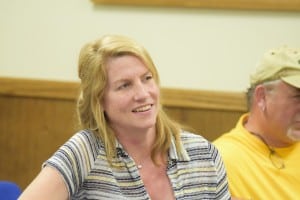 Attorney Norah Hart, a Cold Spring resident, was appointed to serve on the Code Update Committee.

The Code Update Committee has not met since May. One way or another, the Village Board will have to act soon in selecting the consultant in order to honor the contract with NYSERDA and to resume work on the code update in earnest. At Tuesday’s meeting, trustees voted to appoint Cold Spring resident and attorney Norah Hart to the Code Update Committee.

Trustees approved fees suggested by the Historic District review Board (HDRB). Beginning in September, applicants to the HDRB will pay $30 for routine projects and $80 if a public hearing is required.

The village is shopping for liability insurance for lands below the village reservoirs, which are due to be repaired. The current policy expires at the end of the month, and a number of companies have declined to offer coverage due to delays in the start of the dam repairs. Trustee Fran Murphy said that the village is waiting for the New York City Department of Environmental Protection (DEP) to approve a connection to the Catskill Aqueduct, which will provide Cold Spring and Nelsonville with water during the dam project.

She said that the village will be able to renew its general liability insurance and that the search for coverage on the downstream lands continues. “We would not be the only village without downstream coverage, but we’d prefer to have it,” she said.

Developer Paul Guillaro presented paperwork outlining bonding for the Butterfield redevelopment project, and Merandy will sign off on the documents after a final review by the village attorney. Bonding and a number of easements and covenants are the last legal documents remaining to be approved before construction gets underway.

Discussion regarding hiring a special building inspector for the Butterfield project was tabled. Merandy reported that two inspectors will be required, one for the buildings and one for the property, and that more information is needed regarding how the positions will be funded.

The Village of Cold Spring government now has a Facebook page, facebook.com/vcs10516. Constructed by Bowman and launched earlier this week, the page is intended to “keep you informed about what your Board of Trustees and other village boards and committees are doing.” Trustee Fran Murphy is maintaining site content, which includes brief status reports on such current projects as the Main Street project, residential parking permits and remediation of coal tar at the Cold Spring Boat Club.

It also lists village committees in need of new members. The page provides a link through which residents can sign up to receive email blasts from the village clerk regarding village news, meetings, events and important announcements. The description indicates that the Facebook page is not intended for “back and forth communication” and that trustees will not respond to postings made on the site. Instead, residents are encouraged to communicate with the village via email, mail, phone or by visiting the Village Office.