Local building departments moved closer to a merger Wednesday night (Sept. 9) when the Philipstown Town Board agreed to allow Cold Spring to hire the town code enforcement officer to act as village building inspector on the Butterfield redevelopment.

The Cold Spring Village Board had discussed the proposal last week.

The Town Board’s 5-0 vote on the Butterfield inspections permits town Code Enforcement Officer/Building Inspector Kevin Donohue to function, for $50 an hour, as the village building inspector for the Butterfield project.

This frees village Building Inspector Bill Bujarski to concentrate on ongoing tasks. The village building department is only staffed part-time, while the town’s department operates on a full-time basis. Consisting of two office-retail-commercial buildings, 55 condominiums for retiree-age buyers, and three single-family homes, the Butterfield redevelopment is much larger than the usual construction project in Cold Spring, where renovations of old homes and porches are more common.

Town Board members described the move as a precursor to consolidation.

“It’s a good way to wade into it, said Richard Shea.” However, he also emphasized that the agreement “is solely limited to the Butterfield project.”

About 40 attendees, including GVFC members, turned out for the resumed fire district public hearing, whose first session occurred in August at Town Hall in Cold Spring. Among other things, audience members questioned the likelihood of true public involvement in fire district matters; the $821,204 budget proposed for the fire district by the GVFC Aug. 19; whether the firehouse and equipment would be owned by the GVFC or its supervisory district if a district is indeed established; and the timing of the move toward a district.

Shea defended the proposed change as a way for “the community to have a direct involvement in aspects of the fire department” by approving “any large expenditure of capital” and electing fire commissioners — after the first year: The commissioners serving the first 12 months would be appointed by the Town Board. 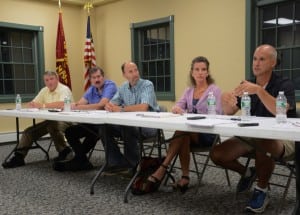 Meeting at the Garrison firehouse, the Philipstown Town Board holds a public hearing on the issue of creating a Garrison fire district; from left: Councilors Robert Flaherty and Mike Leonard, Supervisor Richard Shea, Councilors Nancy Montgomery and John Van Tassel.

Councilor John Van Tassel noted that with a district, the officials in charge, fire commissioners, would all be Garrison residents, unlike the current GVFC overseers — Town Board members — none of whom lives in Garrison. “You’re going to have five people directly affected by the Garrison [fire department] budget” and other issues, he said.

“You know this” about low voter turnout, “but you say over and over this will allow direct involvement of the public,” Freilich objected to Shea.

The supervisor also portrayed creation of the district as a way to eliminate endless Town Board hours spent in fire company oversight “at the expense of other things that should be higher on the priority list.”

When audience members criticized the $800,000-plus proposed fire district budget — a sum not subject to the New York State 2 percent tax increase cap and more than $200,000 above the 2015 GVFC budget set last fall by the Town Board — Town Board members suggested the figure is not viable.

“The budget that was produced really wasn’t a budget for the Garrison Volunteer Fire Department. It was more or less a laundry list of what the fire company sees coming in the near future,” Van Tassel said. “That is not the actual budget that — I’m sure — would go to the public.”

Joe Regele, a frequent critic of fire department financial management, informed the board that “I’ve come around 180 degrees — I think a fire commission is a good idea.” But he urged the Town Board to slow down, be thorough and deal with potential difficulties first. “What is the rush?” He suggested the Town Board handle the GVFC budget again this fall and establish the fire district in January. This autumn, “if you do the budget the way you always do it, what is the downside?” Regele asked. 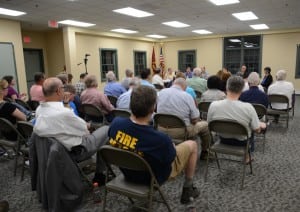 A rapt audience fills the Garrison firehouse meeting room for a public hearing, convened by the Town Board

Shea conceded that “there’s not an incredible amount of downside,” but it lets more months pass when “we’re ready to act” now. He also acknowledged that various questions await resolution but said, “I don’t think these are insurmountable.”

Allusions to hurt, disenfranchisement and lack of trust entered the debate, too.

Resident Marc Kemeny said, “The 20 years I’ve lived here, I’ve never felt welcome in this building … even on Election Day” when the firehouse serves as polling place. With establishment of a fire district, “it seems what you’re doing is putting us one more step removed from our fire department,” he told the Town Board.

“That’s not our intent,” Shea responded.

Sandra Bohl, an interior firefighter and EMT, recalled joining the GVFC three years ago. “As a woman in the fire department, I’ve always felt welcome,” she said.

Shea himself at one point observed that “it just feels like there’s so much resentment here” against the board for proposing a district.

Should a fire commission be set up, “I hope there’s more trust in the commission than you guys have for us,” Montgomery commented, at another juncture.

“I don’t personally believe it’s a matter of trust” but of different approaches, Regele said, assuring the board that overall “I think you’re trying to do the best job you can.”

GVFC Chief Jim Erickson read a statement thanking the firefighters and seeking better treatment from residents. “We do the best for our community and serve you honorably,” he said. “I ask the community to stop hurting our pride and our honor and give us the respect we deserve as volunteers who give up countless hours … .”