Sleep-deprived teenagers have been in the news. Both the American Academy of Pediatrics and the Centers for Disease Control have weighed in with research showing that early school start times are part of the problem. Studies show that teens needs 8.5 to 9.5 hours of sleep per night and the U.S. average is seven.

Because of the way their bodies and brains function, they don’t do well until 8 a.m., according to the CDC report published in August. Lack of sleep is linked to a range of health issues, including obesity, depression, anxiety and mood disorders and Type-2 diabetes.

Haldane middle school and high school students begin their day at 7:33 a.m. currently and are done with school at 2:15 p.m. That leaves time in the afternoon and early evening for an extra period of academic assistance, extracurricular activities like clubs or music, jobs, homework, and sports. The elementary school students attend from 8:45 a.m. to 3:05 p.m. 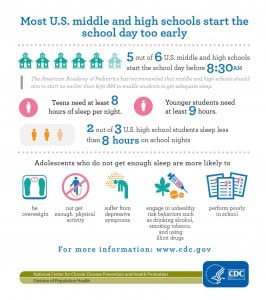 At the Haldane Board of Education meeting on Oct. 20, emphasizing the seriousness of the problem, Superintendent Diana Bowers and Principal Brian Alm made a presentation about the issue with three possible scenarios for adjusting school start times. There are challenges, sacrifices and more resources attached to each.

Haldane students share teachers, classroom space, athletic fields, gyms and transportation across the three levels on a single campus. This allows the district to save money and resources, but it does make any schedule changes a complicated puzzle. There are five cafeteria periods to accommodate all the students, for example. Buses make two runs each morning and afternoon carrying older students first and then elementary students.

Synchronizing the schedules for all grades would mean adding buses, physical education space, music classroom space, PE and music teachers, and new contract terms with the staff. Athletes would have to forfeit band or chorus and the extra period of academic help when they had to play a game. All of this would create a significant enough budget increase that Alm said, “We would have to override the tax cap.”

Districts are only allowed to ask voters to approve a budget increase that falls within their allotment as determined by a formula from the state Department of Education. This is called the tax levy limit and referred to commonly as the “tax cap.” To ask the taxpayers for a larger increase requires a supermajority approval from 60 percent of voters.

Shifting the start times would bring the high school and middle school students in at 8 a.m. and the elementary students in at 9 a.m. The school day would end at 2:45 and 3:30 p.m., respectively. Extracurricular activities and games would start and end later. Students who go off campus to access training and classes at BOCES would miss part of their lunch period. Alm said that they couldn’t share a music teacher across the grades in this case and would need to add a part-time teacher.

Swapping start times had even more challenges and would bring elementary students in at 8 a.m. with upper grades starting at 8:45 a.m. All of the same difficulties occur from the shifting start times scenario, as well as late start times for games and inability to coordinate band and chorus. The full presentation is available on the district’s website. The board asked the administration to continue working and come back with a recommendation. They want to have a course of action before they have to prepare their 2016-17 budget.

Peter Henderson, who was elected in May to a two-year term, announced that he is vacating his seat as of Nov. 19 but will leave sooner if the board finds his replacement before then. He cited personal reasons and said, “I’ll try to elaborate at the next meeting but am reluctant to go into any detail before then. I announced my intention to resign when I did in order to give the board adequate time to plan for my replacement.”

The board has four options: leave the position vacant and operate as a four- member board until the election in May; appoint a replacement; conduct an open search and interview interested candidates before appointing someone; hold a new election. Due to the cost of an election, they ruled out that option first. They intend to seek out interested parties but agreed that they were not obligated to interview everyone who applies. Interviews have to be done publicly.