Ask most people about how they would prefer to die and they will say, quietly at home, asleep, surrounded by loved ones. A hundred years ago there was great likelihood that would occur. Today, under current medical approaches, three out of four of us are destined to end our lives in an institutional setting connected to the latest life-extending technology while receiving a complex cocktail of medication.

A consideration of aging properly includes the end of life and issues such as quality of life, personal relationships and challenges to core values and beliefs. As medicine finds ways to preserve life, but not defeat death, a question arises whether an individual patient facing a terminal diagnosis has the right to say he or she has had enough of life-extending efforts and wishes to end treatment and die. 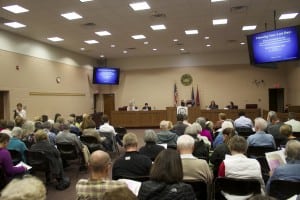 The forum drew a packed house (photo by K.E. Foley)

After some notable court decisions in the last few decades, patients already have the right to have life-supporting machines unplugged despite the likelihood they will die as a result. In the next session of the New York State Legislature, Assemblywoman Sandy Galef, a Democrat whose district includes Philipstown, will likely have to cast a vote on the proposed End of Life Options Act. If enacted, the law would provide New York residents the right to request medication from a doctor to end one’s life at a time of the person’s own choosing when faced with a terminal illness.

Four states, including California, have followed Oregon in establishing this option to “die with dignity” and the rules under which it can happen. Polls consistently show that a majority of Americans favor this kind of a law.

Describing the issue as very emotional, Galef organized a forum with both policy advocates and neutral voices to discuss the matter a few weeks ago. The meeting drew hundreds to the Cortlandt Town Hall in Westchester. Galef let her invited panel do most of the talking.

“There has been a revolution in the way we die,” said Dr. Mildred Solomon, CEO of The Hastings Center in Garrison, which focuses on the study of ethics and science. “For thousands of years humans died of infectious diseases and injuries from accidents. Medicine really improved beginning in the 1960s giving us the ability to forestall death. We now principally die from chronic illness after a period of frailty.” 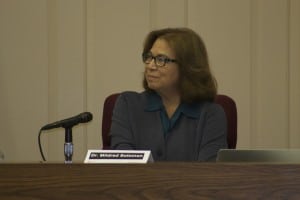 Solomon described modern medical technology as capable of preserving us longer but not capable of undoing chronic illness. It therefore creates burdens as well as the benefits of longer life. She said it is important to develop a consensus on the use of medical technology, which continues to advance, because it is replacing our notions of fate or the power of a higher being as an explanation for our situation.

After discussing what is permissible under current law (namely, the withdrawal of technology from our bodies), Solomon asked: “What about people who are not directly dependent on technology to live? Do they have the right to undertake dying?” She mentioned a case of a woman she knew in late stage cancer with no hope of recovery.

Solomon counseled the audience to familiarize themselves with the questions and rules for end-of-life considerations, to be sure to have clear proxy statements and an appointed proxy to carry out their wishes and to think about what happens to a patient after discharge from a hospital with respect to further treatment options and decisions.

“The time has come to allow people to request aid in dying,” said Corinne Carey, campaign director for Compassion and Choices, a group lobbying for the End of Life Options bill. “Aid in dying is not about death, it’s about how we live in the last days of our lives.”

Carey emphasized that, as in other states, the proposed New York legislation would allow patients to self-administer lethal medicine under regulated conditions, including the need for two doctors to sign off and referrals for counseling for patients thought to be depressed. Referring to the Oregon experience so far, Carey said: “Thirty-five percent of patients never took the medicine. It’s all about autonomy. These people lived longer with the comfort of knowing they had the option.”

Carey underscored, as did some other speakers, that New York needs to do more to improve end of life care provisions beyond the strict insurance regimen of medical procedures.

Carey said opposition to the proposed law is significant, pointing to some medical groups and the Catholic Church, even though, according to Carey, a survey found 74 percent of Catholics support the proposed law.

Could a new legal provision allowing patients and doctors to choose suicide pose a greater threat and burden to permanently disabled people? Bruce Darling, CEO of the Center for Disability Rights in Rochester, thinks so.

Darling suggested that disabled people would be threatened by having their lives valued less once aided death takes hold in the culture. “A disabled person who says they want to die is not seen through the same eyes as the able bodied,” he said.

Darling warned that assisted-suicide procedures could result in deaths after mistaken diagnosis, allow people to “doctor shop” for physicians more inclined to cooperate, and subject both the disabled and the elderly to social and family pressures over the financial burden their continued existence might inflict on loved ones.

“Some people may die who did not want to,” but perhaps others wanted them to, Darling suggested. “How many people are you willing to let die who didn’t want to so you can exercise complete control over your dying?” he asked.

“We should realize that ‘death with dignity’ supports a fundamental change in how we understand the morality of our lives as well as the role of community as it relates to individual members,” said Dr. Ira Bedzow, director of the Biomedical Ethics and Humanities Department at New York Medical College in Valhalla.

Bedzow’s concern is having people appreciate that a change to assisted suicide is a profound challenge to established norms of behavior and the role of doctors in society and not merely an extension of the existing right to die.

“The right to end life should not be conflated with the right to suicide,” said Bedzow, pointing out that refusing medical treatment is a passive act by doctor and patient while assisted suicide requires both to act. He said physician assisted suicide represented a major change in the legal and ethical role of doctors long seen solely as healers.

Bedzow acknowledged that with California approving such an assisted suicide law that our society was clearly headed in that direction. To frame the issue, he said on average people would spend two years suffering through being kept alive under present procedures. He also underlined the enormous expense of current treatment at the end of life, asserting that a third of all health-care spending was for the last two years of life, mainly for repeated visits to hospitals and doctors.

Emphasizing he was not expressing opposition to the proposed law, Bedzow nevertheless expressed concern over the idea that assisted suicide was becoming a morally neutral act after a long history as a prohibited one. 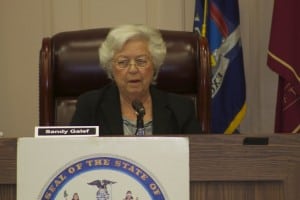 He also urged that other avenues such as changes in medical approaches and improvements in palliative care and its availability continue to be explored as alternatives to the idea that assisted suicide is needed to escape unnecessary suffering.

All of the organizations represented have websites where more information and a more thorough discussion of ideas are available. A CD of the forum is available through Sandy Galef’s office online, or by calling 914-941-1111.

3 thoughts on “Thinking About Aging and the End”