Last month, leaders from 195 countries agreed to an accord on climate change that committed to keeping the global temperature rise from pre-industrial times to the end of this century below 3.6 degrees Fahrenheit. This can only be achieved by limiting greenhouse gas emissions, and that means replacing fossil fuels (coal, oil and natural gas) with renewable energy such as solar, wind and hydropower.

Two groups, Renewable Philipstown and Renewable Highlands, have joined forces to make electricity consumption in the area more eco-friendly. They are using the Sustainable Westchester pilot program for “community choice aggregation” (CCA), approved by the New York Public Service Commission last year, as one of the models.

They hope to use the group-buying power of the Hudson Highlands to launch a new CCA, which can solicit bids from utility providers to supply electricity for the residences and small businesses in the coverage area. (Central Hudson would still be the distributor.) The CCA can set its own criteria for how the electricity will be generated and choose a supplier that meets their pricing and sourcing conditions. 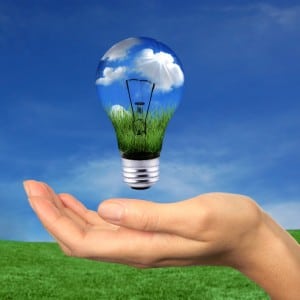 The concept of CCA is being used in six other states; New York’s utility deregulation led to the approval of Sustainable Westchester, which as of December includes all but three municipalities in the county. Forty-one villages and towns in Westchester have signed on. Under the terms of its state approval, Sustainable Westchester can bargain for both electricity and natural gas.

Renewable Highlands launched its website this month and secured support from the Open Space Institute as a fiscal sponsor as part of its Citizen Action Program. Michael Rauch, one of the volunteers, will be the project manager. As a preliminary geographical area for the CCA, the group will explore including Garrison, Cold Spring, Beacon, Newburgh, Cornwall and Highlands.

“It’s still really early in process and we’re thinking about feasibility,” he said. “We’re looking at a population base that could qualify for a discount on power supply. While we’ve had early support in Philipstown and Beacon, we haven’t talked to other communities yet.”

Renewable Highlands’ fiscal relationship with the Open Space Institute allows it to fundraise to cover costs such as for public education and information sessions, technical expertise and consultants.

Meanwhile, Renewable Philipstown, a group of about 15 community members who began meeting last year, will press forward with another major channel for “sustainably sourced” electricity. Under New York’s deregulation in the 1990s, consumers are able to select their energy supplier.

It’s been a personal project for Peter Callaway, a Cold Spring resident and retiree, for about a year. He has been using social media and setting up information tables at events to convince people to switch to a renewable Energy Supply Company (ESCO).

Callaway expects that about a third (12 of 35) of the people he’s shared information with so far in 2016 have switched.

The state’s website for consumers to review ESCOs, called Power to Choose, is a challenge to navigate, which might be part of the reason the option isn’t widely used. There are 11 companies listed that supply from renewable sources and 24 from fossil fuels or nuclear energy. Green Mountain, a company that Callaway recommends, claims that by choosing its product over a typical system, “a New York household with average monthly usage of 750 kWh can avoid more than 13,600 pounds of carbon dioxide (CO2) emissions a year.”

According to the World Bank’s global rankings of carbon emissions, the average American is responsible for 17 metric tons of CO2 in the atmosphere per year. (Aruba, Brunei, Kuwait, Oman, Qatar, UAE and Saudi Arabia are the only countries with higher emissions.) So switching to a renewable source could drop an American’s footprint by about 6 metric tons annually. That’s still more than a French person (who creates 5.2 metric tons), but a big improvement, nonetheless.

Home installations of solar panels aren’t being widely used in the area, either, although costs have dropped and there are state subsidies and low-interest loans available. The New York State Energy Research and Development Authority lists only 213 photovoltaic installations in Putnam County completed since 2003, although another 74 have been approved. Residents are converting at a much higher rate in Dutchess and Westchester counties, with 1,481 and 1,924 installations, respectively.

Callaway’s advice? “When it comes to renewable energy, there isn’t much to be gained with fixed rates,” he said. “Upstate wind turbines don’t seem to change much” as far as their production. He said he’s been watching Green Mountain Energy for two years and said its variable rate, which is lower than the fixed rate, has been stable. His spreadsheet includes research on consumer complaints and Better Business Bureau ratings for the various suppliers, and he has posted that data at Renewable Philipstown’s website. (It also has a Facebook page.) The rates are either less expensive or the same as Central Hudson’s.

The question is, then why don’t more consumers switch to a ESCO? Callaway believes people may be afraid of change and that there are more immediate things that demand attention. Maybe it’s just learned helplessness. We don’t feel control even though we have some.

Callaway isn’t giving up, though. If you find him at the Cold Spring Farmers’ Market on Saturday, Jan. 30, he’ll walk you through the process, or sit down with you and your utility bill and do it for you. “Each one feels like a small victory for our planet and our future,” he said.