Menopause, and all that can happen during and post may be a marginalized topic, full of “difficult to talk about” physical and hormonal changes, but the roomful of women in their 40s and 50s gathered around a communal table at the Garrison Café on Feb. 4 to listen to a “community talk” given by NewYork-Presbyterian/Hudson Valley Hospital’s Karen Michella, were anything but reticent in raising questions relating to issues brought up in the presentation, which was titled “Menopause and its Effects on Your Body” — or, as she more irreverently referred to it, “What happens below the belt?”

The evening was co-hosted by the Garrison Café and Alison Anthoine, representing the Cold Spring Chamber of Commerce, and was also attended by Carolyn Padial, PT, director of physical medicine and rehabilitation at the hospital, along with Cold Spring’s Patti Pelican, the hospital’s community outreach coordinator. 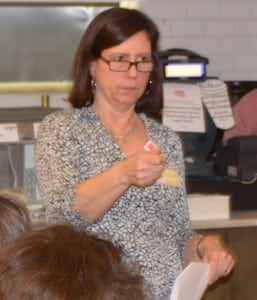 Michella, a senior physical therapist specializing in the pelvic floor, who holds certification in orthopedic manual therapy, came to her profession after having children, wanting to work in a field where she would “see a progression.” As a pelvic floor specialist, she generally sees patients who have been referred by other physicians; these can range from urologists to general practitioners, and part of her job, Michella says, is to spread the word to physicians that she and her peers have a specialized knowledge. At her hospital practice, the patients she sees (women and men) are largely dealing with pelvic pain of some kind and/or incontinence.

Working in tandem with a handout, Michella first defined where and what the pelvic floor is, along with its function. That area of the body, replete with its layers of muscle, fascia, ligaments and connective tissue, provides stability and support for parts of the body one might not think of, including the hips and spine. Often, an issue arising elsewhere is actually solvable by examining and working with the pelvic floor. A functional pelvic floor is one in which the muscles there can voluntarily and involuntarily contract and relax. Overactive pelvic floor muscles, which contract rather than relax, can lead to issues of elimination of waste, while their underactive counterpart can produce incontinence or pelvic organ (the bladder, uterus or rectum) collapse; both can contribute to back pain.

Continuing on to menopause, the time in life when menstrual periods stop permanently, which typically occurs between 45 and 55 years of age, Michella first discussed the many occasions when “typically” doesn’t apply, and basically said that there isn’t necessarily a typical scenario, and that many women stress that what they are going through is abnormal, when it is actually just a less common variant on natural processes. For example, some women experience erratic periods for years, but no hot flashes, while others cease menstruating all at once, but might continue to get night sweats. Listing the many potential symptoms of menopause, most of which were likely familiar yet not necessarily experienced by the women at the table, Michella continued on, defining pelvic pain and female pelvic pain conditions. This is a more common occurrence than might be perceived: according to the National Institute of Health, she said, 15 percent of all U.S. women report a history of pelvic pain lasting three months of more, according to Michella, who noted that “in the U.S. estimated direct medical costs for outpatient visits from chronic pelvic pain is approximately $881 million per year.”

Going into more detail, Michella discussed the prevalence of urinary incontinence in men and women, the various types of it, interrupting the serious topic with a joke, asking “Anyone who has to get up to go to the bathroom should — it’s been 20 minutes” and getting a roomful of familiar chuckles in response. Returning to a more obscure topic for most, she discussed pelvic organ prolapse, for which about 200,000 inpatient procedures (testing and surgeries) are performed annually in the U.S. Prolapse, which has different “degree” levels, some requiring surgery, others not, sometimes comes as a surprise to women, who are not even aware that they have the condition until a doctor spots it. Even when a doctor becomes aware of it, that doctor isn’t always the best person to figure out what course to take. That’s where pelvic floor physical therapy specialists come in. Working from referrals (usually covered by insurance companies in much the same manner as standard physical therapy referrals) relating to pelvic pain, prolapse and incontinence issues, they very much do hands-on diagnoses and monitoring, measuring muscle mobility and strength, with palpation for pain.

Treatment can range from internal and external soft tissue release; neuromuscular redirection and education in exercises, such as the “Kegels” familiar to any woman who has gone through a pregnancy, designed to strengthen the pelvic floor. Noting that 50 percent of all people (men can do them too) do Kegels incorrectly, Michella, after describing how to find one’s pelvic floor muscles (you had to be there … ) then described the correct methods of contracting and lift, and where precisely to do them, explaining that they are not a squeeze of the inner thigh or buttock muscles and also not a pelvic tilt. The goals of treatment are to decrease trigger point in pelvic floor muscles, decrease pain, increase blood flow or improved healing, increase pelvic floor muscle strength and normalize contract-relax ability of pelvic floor muscles as well as normalizing toileting when applicable.

The evening ending with some Q&A time, then a little socializing followed.

To learn more about Michella’s services, contact her at the Centers for Rehabilitation, 914-734-3251.