Sites would be added in Philipstown and Cold Spring

The number of 911 calls placed by people using wireless phones has significantly increased in recent years, with an estimated 70 percent of calls received by emergency dispatch centers coming from cell phones, according to data from local law enforcement.

With this in mind, Putnam County has begun working on a plan that includes a private-public partnership to improve emergency responder radio coverage throughout the county — which may also benefit cell phone users aggravated by dead zones.

Legislator Barbara Scuccimarra, who represents Philipstown, said she is excited about the potential of the project. “Cold Spring is notorious for having blackout spots,” she said. 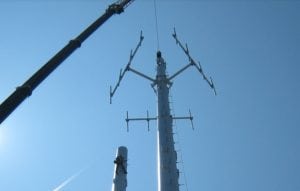 Walker explained that a committee, including Thomas Lannon, Sr., director of information technology and geographic information systems for Putnam County; Frank Christian, operations captain at the sheriff’s office; Anthony Sutton, commissioner of the Bureau of Emergency Services; and Mike Cunningham, asset manager for the county, have led the charge in seeking out funding opportunities to make upgrades.

After being turned down for a $6 million grant in 2013, the committee reworked its proposal and was successful last year in securing $3.5 million through the New York State Division of Homeland Security and Emergency Services to study the interoperability of cell towers in the county.

“The tenacity of these guys is really what got us the $3.5 million to upgrade our microwave system,” said Walker.

Homeland Towers is based in Danbury, Conn.

Potential locations for cell towers include the intersection of Route 9 and Route 301 in Philipstown, another site to be determined in Cold Spring, as well as locations in Putnam Valley, Mahopac, Carmel and Patterson. The county also has been in with WHUD-FM to contract to use its tower on Sky Lane in Garrison.

“We didn’t just randomly pick the sites,” said Lannon, explaining that altitude, geography, topography, and frequency and microwave range all factor into the mix.

Each tower site would include space for all Federal Communications Commission-licensed carriers within a fenced compound, space for county base station equipment, and space reserved for the county on the tower.

According to Walker, the committee plans to go before the legislature next month with a more solid plan.