Boscobel House and Gardens in Garrison was recognized with the Exemplary Museum and Exhibition Award for its current exhibit, “Hudson Hewn: New York Furniture Now,” while artist Melissa McGill was honored with the Innovative History Award for her installation, Constellation, on Bannerman’s Island. 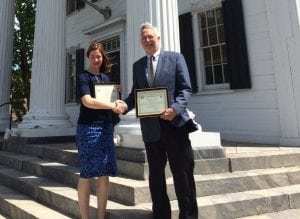 The Creative & Adaptive Reuse of a Historic Structure Award was given to the Tompkins Corners Cultural Center in Putnam County, which converted the former United Methodist Church into a gathering and performance space, and a Lifetime Achievement Award was presented to journalist Eric Gross of The Putnam County News and Recorder. The publication anniversaries of The Putnam County Courier (175 years) and the PCNR (150 years) were also noted.