Carl Frisenda is the rookie highway superintendent for the Town of Philipstown, having served in the position for only a few months since defeating longtime incumbent Roger Chirico in the November election. But as he put it during a tour of recent projects: “I’ve been working on roads for 34 years. Nothing has shocked me on this job.”

Frisenda’s easy-going attitude came through as he recalled the torrential rains that fell in western Putnam County at the end of July and wreaked havoc with the town’s dirt roads. 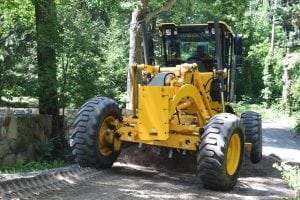 “We got about six inches of rain at the town garage,” he said. “But it wasn’t ‘big-big;’ it was more of a nuisance.” Frisenda estimated that 20 miles of the town’s 30 miles of dirt roads were damaged significantly; Indian Brook Road washed out, creating a gully four feet deep. “That was really rough,” he said. Heavy flows along a stream shifted even the boulders that protect the shoulder of East Mountain Road, creating a situation Frisenda said “had to be taken care of before something major happened.”

After the storm, Frisenda said he told his 14-man crew, “Do what you gotta do…. I have a really good bunch of guys — they know how to do it.” Knowing how to do it included borrowing a grader from the county. Three crews were put to work re-grading virtually all of the town’s dirt roads.

Passions can run high in the dirt vs. paved debate. It’s a tightrope that Frisenda walks cautiously. “I’m going to try everything I can to get [to] a happy medium,” he said. “We’re about half and half between dirt and paved.”

He admits that dirt roads are a challenge. “I see a lot of tax dollars going out the door every time it rains,” he said, adding that he hates watching Item 4 gravel wash away into the woods. “You can’t get it back — it’s gone. And then you have to do it all over again. There are other projects we want to get going on, but it seems whenever we get caught up we have to start all over again.”

For their part, paved roads “hold up for the most part — as long as you don’t have a hurricane.”

Frisenda said he is willing to work to keep dirt roads a part of the local landscape. In June, Ken Skorseth, a consultant from South Dakota, addressed the town board and residents about preservation methods. “He suggested that we use bentonite, a clay that you mix with the item 4,” Frisenda said, explaining that the clay congeals the gravel, enabling rainfall to simply run off with much less erosion. “We just ordered some and we’re going to try it on a small section of road.” Frisenda said a number of good ideas came out of the June session. “I’ll try to do whatever we can to preserve the roads — but it’s not cheap.” 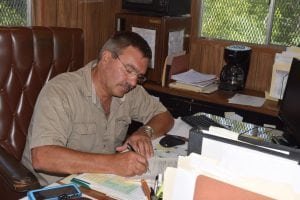 Frisenda is also trying out two methods on seven roads, including Hustis, Wood, Beal, Joanne, Fenchel, Hiram and Clove Brook — each marked by badly cracked asphalt. A product called FiberMat, which consists of a modified asphalt emulsion and strands of chopped fiberglass, has been laid on each road, then covered with a thin layer of fine gravel. In September crews will coat the streets with Slurry Seal, a mixture of asphalt emulsion, aggregate, mineral fiber and water that dries to a hard black surface.

“I’ve spoken to other highway superintendents and they swear by it,” Frisenda said. “They said it helps preserve their roads at a fraction of the cost. We’re saving taxpayers money by doing this and it’s pretty much the same as blacktop.”

Frisenda said he understands he will always have a to-do list. “We always have work to do,” he said. “We just have to prioritize.” The priorities include a new bridge on Avery Road and rebuilding Manitou Station Road, both in Garrison. Both projects are waiting on state wetland permits.

Avery Road will be completed mainly by contractors but Manitou Station will be done by the highway department. The latter project, which Frisenda calls a “biggie,” will entail raising the road substantially where it passes through the wetland while adding equalizer pipes to allow water to flow freely back and forth through the marsh.

Other projects in the works include repairing two washouts on East Mountain Road and replacing gabion baskets on Horton Road and Indian Brook Road.

Asked to name his department’s biggest need, Frisenda answered immediately: “I need some new trucks,” he said. “We have some that are pretty old and it’s time to replace them, but I have to stay within the budget. We lease the trucks and buy them after five years. I can ask but the town board has limits, which I understand completely. They’ve been very supportive.” The department is expecting a new six-wheel dump truck to arrive by the end of August, which will help. 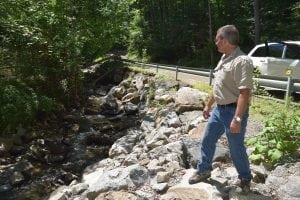 Erosion protection must be rebuilt along this stream on the shoulder of South Mountain Pass Road (Photo by M. Turton)

Frisenda, a Democrat, had to win an election to become superintendent but said he doesn’t encounter politics in the position. “It’s just about fixing the roads,” he said. “They don’t say ‘Hey, I voted for you.’ Everybody wants something done and that’s understandable. They pay taxes.”

Asked to sum up his first months on the job, Frisenda replied: “It’s a new adventure every day. I’m enjoying it. You do have times where you scratch your head a little bit because something new comes up and you have to stop what you’re doing. It’s a challenge but it’s good.”

There is one challenge that he could do without. “If you look at Jim Witt’s weather calendar, I think there’s a hurricane penciled in for the middle of September,” he said. “I’m hoping that it’s not true!”