Responding to a new state law signed by Gov. Andrew Cuomo on Sept. 6 requiring every public school district to test its water for lead, the Haldane and Garrison school districts reported their drinking supplies well below a state threshold, although as of Oct. 27 Garrison still awaited results on one drinking fountain.

The Beacon City School District did not respond to an email and phone message requesting information on its testing, which the state Department of Health said in an emergency regulation that all public districts must complete by Sept. 30 for elementary schools and by Oct. 31 for middle and high schools.

Administrators at Garrison, which serves grades kindergarten to 8, and Haldane, which has all grades, said that in anticipation of the mandate they tested all water fountains earlier this year and found no cause for concern.

“New York State would rather be safe than sorry,” Diana Bowers, superintendent of the Haldane Central School District, said of the mandate.

The state regulations, which Cuomo called “the toughest in the nation,” were a response to concerns over pervasive lead contamination in the water system in Flint, Michigan, and fears of similar pollution elsewhere. Studies connect lead consumption by children to brain damage and behavioral problems. Aging lead pipes and solder are the most common sources for contamination.

The New York law applies to fountains, faucets and other taps, such as those on athletic fields, which provide drinking water, and requires the water have no more than 15 parts per billion (ppb) of lead. A supply containing more than 15 ppb can be used for cleaning and handwashing because, according to the state Department of Health, lead cannot be absorbed through the skin. However, schools must post signs that warn against drinking the water.

The law requires public schools use qualified laboratories for testing and inform health authorities and parents within 10 days if results show excessive lead. The school must post all results on its website within six weeks, alongside any necessary remediation plans. The site also must include by Oct. 31 a list of all lead-free buildings. And by Nov. 11, each district must provide the state Health and Education Departments and local health authorities with a report on completion of the sampling, data from any tests conducted before the law took effect and its list of lead-free buildings. The law does not apply to private schools.

Laura Mitchell, superintendent of the Garrison Union Free School District, wrote in an Oct. 21 letter to parents that, in anticipation of the law, the district tested its drinking fountains in the spring, and that all samples were well below 15 ppb.

On Sept. 27 Garrison began sampling all 59 outlets for drinkable water. Within three weeks it received results for 46, and 15 samples contained lead exceeding the 15ppb maximum, although none came from drinking fountains. She said the school immediately cut off water to those 15 sources. 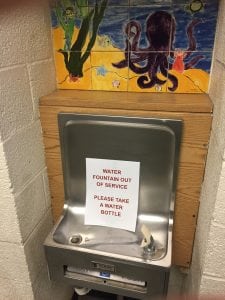 A drinking fountain at Garrison School on Oct. 26.

The remaining 13 samples include water from four of the school’s five drinking fountains, and the water was shut off as a precautionary measure. In the meantime, the school provided bottled water.

On the afternoon of Oct. 27, Mitchell said GUFS had just received further – albeit partial – test results and was able to restore three drinking fountains. One fountain remained shut down because “we’re still missing results,” Mitchell said. She added she planned to send parents an update on the situation later that day.

In an Oct. 26 interview and a letter sent to Haldane parents the same day, Bowers said the district conducted tests in the elementary and middle schools and Mabel Merritt Building in late September and in the high school the week of Oct. 17. Like Garrison, the district also tested its drinking water earlier this year.

The September tests found no problems with any drinking water, Bowers said in an interview. She elaborated in the letter, reporting that of 99 samples taken, 11 tested above the lead limits but all were from non-drinkable supplies in the greenhouse, science classrooms and an ice machine where a pipe, not the machine itself, was the source.

Five sinks in the science classrooms showed troublesome levels after a test in which water stands in the basins for at least eight hours, but administrators aren’t sure if the lead came from the sinks or the pipes. Warning signs were placed over the sinks and/or they were shut off, Bowers said in her letter. 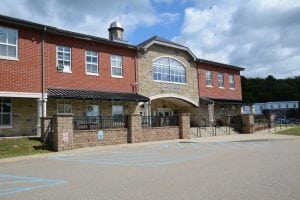 The high school’s results will probably not arrive until early or mid-November, Bowers said, but the district does not anticipate they will show contamination because the 11-year-old building and its water pipes are relatively new.

Lead poisoning is a concern at schools because water sits in pipes overnight, over weekends and during vacations, giving it more contact with lead pipes and solder than during consistent household use.