The Cold Spring portion of the proposed Hudson Highlands Fjord Trail linking Cold Spring and Beacon may be altered as a result of concerns raised before and during a public meeting Nov. 14.

The trail’s master plan calls for the Cold Spring end of the nine-mile route to travel from the Metro-North train platform to Main Street, then north along Fair Street to Route 9D and to Little Stony Point. 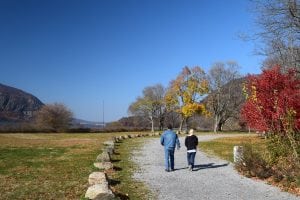 The Cold Spring portion of the Fjord Trail may be rerouted through Dockside Park rather than Fair Street. (Photo by M. Turton)

At the Nov. 14 meeting at Dutchess Manor, which was attended by about 75 people, a number of Fair Street residents repeated their opposition to the route, citing what they say is a significant increase in pedestrian traffic on the street and sidewalk even before construction has begun.

A woman who lives on Fair Street but did not identify herself said that hazardous conditions would only increase once bicyclists begin using the trail. “Bikes can’t ride on the sidewalk and the street is too narrow” to support a bicycle lane, she argued.

She added that Fair Street residents already find it difficult to pull out of their driveways and that children can’t play on the sidewalks due to the large number of hikers heading to and from Breakneck Ridge, especially on weekends.

Scenic Hudson’s Amy Kacala, a senior planner working on the project, facilitated the meeting. She said the issues raised about Fair Street justify reconsideration of an route previously rejected that would go from the train platform to Dockside Park, then along the riverfront to Little Stony Point.

“This route would essentially bypass downtown Cold Spring,” Kacala said in an email. She said Fair Street had been proposed to ensure that the trail would benefit Main Street businesses. But now, three years later, it appears some residents feel the number of visitors has reached a critical mass and that a bypass via Dockside would ease congestion.

Kacala has contacted Metro-North, a partner in the Fjord Trail project, because a change in route to include Dockside would involve using railroad property and its right of way. “We will be looking at this more closely, including, potentially, some preliminary engineering,” she said.

(How Cold Spring residents living west of the tracks will feel about the trail being rerouted through their neighborhood remains to be seen.)

Numerous other concerns were aired:

After hearing the litany of complaints, Kacala noted that a “no build” decision is an option. The section of trail from the Breakneck whistle stop to the trailhead, known as the Breakneck Connector, will move forward, but the rest of the proposed route remains open to discussion, she said. However, she asked, “Will doing nothing help?” The problems, she said, already exist, and the trail planning process is designed to address them. 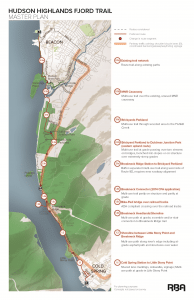 The proposed route of the Fjord Trail (click to enlarge)

John Teagle, a member of the Little Stony Point Citizens Association, suggested the trail may make the situation better by spreading usage out over the entire corridor, rather than focused at Breakneck. If more people take the train from Beacon or hike from there, and with planned improvements to parking, Teagle said that some of the burden Cold Spring faces may be reduced. “It may end up that a lot of what people are complaining about will improve, and there will be economic benefit,” he said.

Steve Smith, chief of the Cold Spring Fire Company, complimented planners for listening to his ideas and redesigning the area near the Breakneck tunnel after he pointed out the problems that first responders have experienced when parking large emergency vehicles there. “They helped us out big time,” he said. “They’re working with everybody.”

Chris Robbins of AKRF, Inc., the consulting firm drafting the Environmental Impact Statement for the project, stressed the review will cover a range of impacts from environmental and economic to projected visitor use and its effect on the community. A seven-day field assessment will include a detailed analysis of the trail route, he said.

Linda Cooper, a regional director with the New York State parks department, said officials at Hudson Highlands State Park have plans to divert some visitors to Fahnestock. She noted other state parks have also been dealing with an increase in attendance.