The Metropolitan Transportation Authority (MTA) has proposed fare increases to take effect in March that would add $15 to the cost of a monthly pass to Grand Central from Philipstown or Beacon and 50 or 75 cents to the cost of a one-way ticket.

The MTA put a positive spin on the proposal, calling it the “lowest fare increase since 2009.” About half of the MTA’s $15.6 billion annual budget comes from fares and tolls. “The MTA continues to keep its promise to make sure that fare and toll increases, while necessary to keep our system running, remain as low as possible and that they are done in as equitable a way as possible,” said Chairman and CEO Thomas Prendergast. 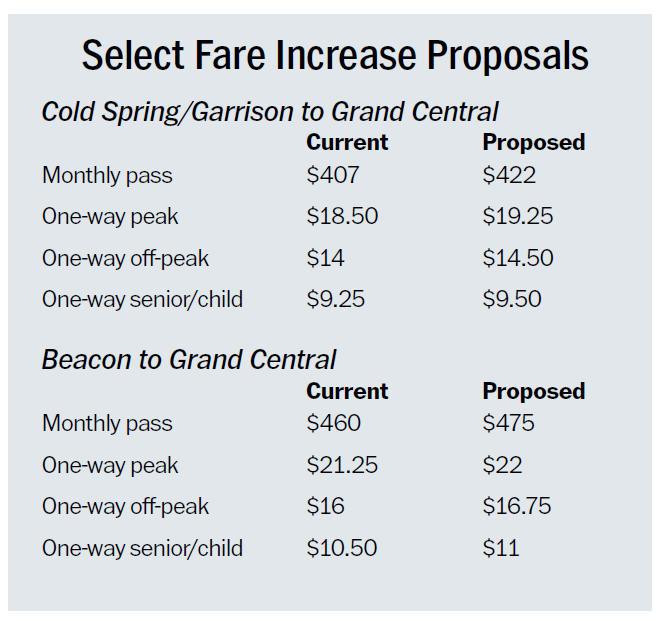 The agency has scheduled eight public hearings in December. The closest to the Highlands is in White Plains on Dec. 20, which prompted state Sen. Sue Serino to urge the MTA to also schedule hearings in Dutchess and/or Putnam counties.

“Time and time again our community gets shortchanged by the money-hungry MTA,” Serino said in a statement. “It’s bad enough that they continue to shift the burden of their out-of-control finances onto the backs of hardworking New Yorkers by proposing these fare hikes, but it’s even worse that they are once again disenfranchising a large number of riders by failing to hold public hearings in each of the affected counties.”

The White Plains hearing takes place at the New York Power Authority in its Jaguar Room, 123 Main St. (entrance on Hamilton Avenue). Registration to make comments of three minutes or less is open from 4 to 8 p.m., and the hearing begins at 5 p.m. Comments may also be submitted at mta-nyc.custhelp.com or by writing to MTA Government Affairs, 2 Broadway, 20th Floor, New York, NY 10004.