Highlights from meetings of Dec. 6 and Dec. 13

Only two elements of the Cold Spring Main Street Project are yet to be completed, Deputy Mayor Marie Early reported at the Dec. 6 meeting of the Village Board: planting trees in the spring and lighting improvements that remain unresolved.

The lighting upgrades were delayed when Central Hudson declined to install “area lighting,” which is mounted low on poles and designed to illuminate sidewalks, after residents and businesses in other communities complained that it was too bright.

The utility is developing a less-harsh LED light that may be used to replace existing lights on Main Street and be added to unlit polls. Early said that a prototype could be installed as early as January.

Samantha Lutzer, owner of The Pantry in Philipstown, and Stacey Dugliss-Wesselman, owner of Cold Spring Apothecary, asked trustees about the fee for a parking waiver for 12 spaces for 75 Main Street, where they share the ground floor. The fee for the waiver is $3,000, which the owners said came as a surprise. (Business owners who cannot meet Village code requirements to provide sufficient parking pay a fee of $250 per space.) Lutzer and Dugliss-Wesselman contended that based on their interactions with Building Inspector Bill Bujarski, including information he provided two years ago, the fee should be much less.

When Merandy suggested tabling the issue, a visibly frustrated Lutzer asked to pay the waiver on the spot to move the process forward. The board approved the waiver but Merandy said that he would review the fee with Bujarski.

Lutzer, who practiced law for 15 years, complained that the application process was time-consuming and confusing. She said that a previous attempt by The Pantry to open a coffee bar on lower Main Street in partnership with Beacon-based Ella’s Bellas had been abandoned due to difficulties in dealing with the building department and planning board.

On Dec. 15, members of the Tree Advisory Board and the Highway Department attended a half-day workshop entitled “Managing Street Trees: What You Should Know For Success” at the Westchester County Center in White Plains.  The workshop was a joint initiative of Cornell University Cooperative Extension and the Westchester County Department of Planning and Soil and Water Conservation District. 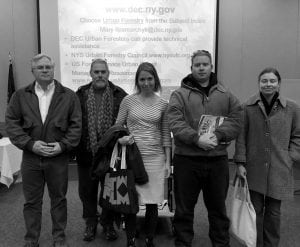