The Village Board on Jan. 10 proposed increasing the speed limit on Cold Spring streets to 30 mph, from 15 mph, to conform to state traffic laws.

It also seeks to restrict parking on Church Street alongside the firehouse to fire company members and in front of Village Hall, at 85 Main St., to police officers, eliminating the present 15-minute Village Hall parking.

But before anything happens, the board will hold a hearing at 7 p.m. on Tuesday, Jan. 24, at Village Hall.

The code revisions would allow some exceptions, such as a school zone speed limit of 15 or 25 mph near Haldane and the 25 mph allowed along Main Street west of Route 9D, the village-controlled portion of the street which is otherwise Route 301, a state highway. 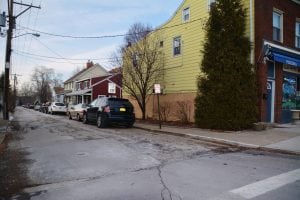 Garden Street’s speed limit would increase to 30 mph from the 15 mph now posted and parking would be prohibited for 50 feet from Main Street. (Photo by L.S. Armstrong)

Deputy Mayor and Trustee Marie Early said during the board’s Jan. 10 meeting that she noticed the speed-limit discrepancy as she reviewed the Village Code. “New York State Vehicle and Traffic Law says the lowest you can go is 30 miles per hour,” Early explained. “So our code is not in concert with the state law.”

According to Early, the village could reduce the speed limit to 25 mph in rare cases but not everywhere in Cold Spring. She presided over the meeting in the absence of Mayor Dave Merandy. Trustee Lynn Miller was also absent, leaving Early and Trustees Fran Murphy and Steve Voloto as a three-person quorum.

New York’s Vehicle and Traffic Law Section 1643 stipulates that in a village or city, no speed limit shall be established at less than 30 mph, except for Long Beach, on the sea in Nassau County, which can restrict speed to 15 mph on certain streets. Statewide, New York also permits a 15-mph limit for a quarter mile on streets alongside schools. That’s 10 mph slower than what Cold Spring’s draft law proposes. Early recommended that residents, at the public hearing, urge that the village school-area limit also be 15 mph. 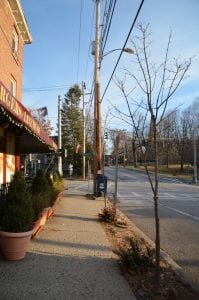 Parking would be banned for 50 feet on Morris Avenue alongside Whistling Willie’s. (Photo by L.S. Armstrong)

Whether residents will support the abolition of a 15-mph maximum elsewhere is unclear. Children sometimes play in the streets, especially on the 19th-century blocks where homes are close to streets that are narrowed further by parked cars. Over the last several years residents of Church, Fair, and other streets have complained about speeding even with a 15-mph limit.

The fact that the board can hold a hearing on the proposed speed limit,  instead of changing the local law immediately to reflect the state standard, suggests alternatives may exist, such as a request to Albany to allow a lower speed limit in Cold Spring, a historic village heavily visited by tourists and with many pedestrians.

Other proposed traffic changes include:

The board began discussions of the condition of the Cold Spring firehouse roof and replacement of the air conditioning (HVAC) system, which fire company members described as necessary for cooling firefighters after action on a hot day and for the firehouse’s large meeting room to serve as an emergency public shelter.

Voloto observed that roof repairs must precede the HVAC, although it may be possible to repair the roof area containing the HVAC units and fix the rest of the roof later. The village owns the firehouse and thus the roof problems damage a village asset, he said. 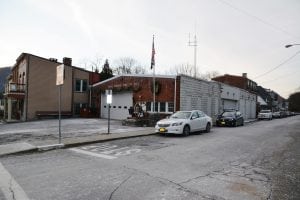 The Village Board proposes banning parking on Church Street alongside the firehouse except for firefighters. (Photo by L.S. Armstrong)

Early questioned whether a smaller cooling room would work for firefighters and another building, such as at Haldane, could be used as a public shelter. She recommended that village and CSFC leaders confer; the board scheduled a workshop for 6 p.m. on Tuesday, Jan. 24, preceding the speed-limit hearing.

Along with the roof woes, the CSFC brought some good news. Smith reported the company received 127 calls in 2016, down from 145 the previous year, and that calls to rescue lost hikers were down to one or two annually because the fire company now only assists when hikers are injured. The state parks department takes care of those who are just lost, and trail stewards posted at trailheads are advising hikers about proper clothing and footwear and, most important, how much water they should have, he said.

Smith said the Cold Spring department also answered fewer carbon monoxide and fire alarm calls. “Hopefully that is because people are changing the batteries in their units, as they should when changing clocks with daylights saving,” he said, although he emphasized residents should always call the department if their alarms are sounding.