Barney Molloy, a board member of the Cold Spring Area Chamber of Commerce and board chair of the Putnam County Visitors’ Bureau, pleaded not guilty to misdemeanor theft on Jan. 25 after allegations he took copies of The New York Times from bundles delivered to Cupoccino Café, a Cold Spring coffee shop. 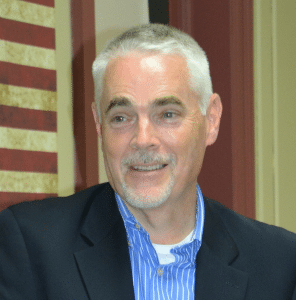 Molloy, a former mayoral candidate, appeared in Cold Spring Justice Court before Judge Thomas Costello. He is scheduled to return to court on Feb. 8.

The accusation was brought by Officer Thomas Ciero of the Cold Spring Police Department. In a signed statement, Ciero said that about 6 a.m. on each of four weekdays – Nov. 18, Nov. 21, Nov. 29 and Dec. 12 – Molloy “untied the bundle of New York Times newspapers delivered to the business, removed one” on each occasion “and placed it in his tote bag, all prior to the business being open.”

The officer put the value of the four papers at $10, saying the alleged offense amounted to petit larceny.

Molloy, who ran for Cold Spring mayor in 2015 and for trustee in 2016, works for Legislator John Testa, the Republican minority leader of the Westchester County Board of Legislators. He did not respond to an email seeking comment. Jessica Arguello, Cupoccino’s proprietor, declined comment.

Molloy formally pleaded not guilty on Feb. 8 to accusations he stole newspapers from outside Cupoccino Café. Judge Costello adjourned the case until March 8.

Molloy said after the arraignment that he had no comment but on Jan. 30 told the Putnam County News and Recorder that he was a regular customer who settled his account every few days. “I was never made aware of any issue with the papers,” he was quoted as saying.

12 thoughts on “Tourism Board Chair Charged with $10 Theft (Updated)”