Elkhart, Indiana, was once home to 60 companies that made band instruments. It also has produced a few people who play them at the highest level, including Greg Smith, a Cold Spring resident and Broadway mainstay who says he showed no hesitation when, in fourth grade, he was asked how he’d like to contribute to the school band.

“French horn!” he announced, having heard the instrument at a concert he attended with his parents. “What a sound — I want to play that!” 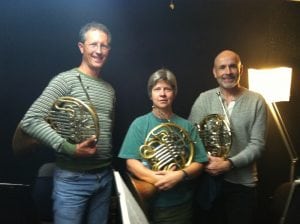 Greg Smith, Alex Cook and Patrick Milando, who play French horns in The Lion King orchestra, in the pit at the Miskoff Theatre (Photo provided)

His subsequent career with the instrument has taken him from conservatory to chamber groups to Broadway, where he has played in the orchestra for The Lion King since 2004.

Smith also has lent his talents to the Haldane school district, creating and advising a brass ensemble, launching a monthly Classical Café series in which students perform in the cafeteria during lunch and bringing a Lion King school edition to fifth- and sixth-graders. His next project, with violinist Rachel Evans, will be a youth orchestra.

Smith says he was fortunate that his first experience in school with music was so positive, courtesy of the magnificent instruments made in Elkhart and a talented teacher. Both of his parents were amateur musicians, and so there was always music playing at home. By ninth grade Smith realized he loved the French horn enough to commit to it, even if it put an end to his dreams of basketball or tennis stardom.

He was told that if he wanted to pursue the French horn, he needed to attend Carnegie Mellon in Pittsburgh. His mother drove him there for an audition. “I went into a small studio, filled with cigarette smoke,” Smith recalls. “I started playing and immediately the [horn] teacher said, ‘You need to come here.’ ”

Unfortunately, a year later, the professor suffered a heart attack and could no longer teach. After transferring to Northwestern University, Smith moved to Taiwan to play with its newly created national orchestra. After further study in Boston, he landed with the Vienna Chamber Opera. It was in Austria that he met another American, Mona Smith, who became his wife. 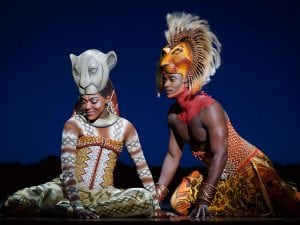 A scene from The Lion King on Broadway (Disney photo)

While living in Brooklyn and playing with chamber groups, Smith was asked by a friend to substitute in the orchestra for Broadway’s Jekyll and Hyde. Smith subsequently stepped in for other shows, including Wicked and Fiddler on the Roof, and says each experience was nerve-racking. “There is no rehearsal,” he says. “You watch the performance two or three times and that’s it. Jekyll and Hyde had a solo horn part, and there was no place to hide. You listen and hope the cues are clear.”

Smith says performing the same music night after night — in this case, for more than 4,000 performances of The Lion King over 13 years — has never bothered him. “It’s not that different from playing in an orchestra,” he says. “I played Mozart’s The Marriage of Figaro 20 times each season in Vienna.

“The energy pumps you up,” he says. “For the audience members on any given night, it may be the only time they’ll see it. Plus actors come and go — we have a new Scar [the villain] and it’s different pacing. I have the music memorized, but that allows me to participate more fully and get beyond the technical.”

When Disney released a school version of the show, Smith felt it would be a great fit at Haldane. “It’s meant to be an educational process, incorporating up to 30 units, including scenery-making and costumes, and schools can pick and choose and blend it into the needs of the classroom,” he explains. “The classes lead to the production of the show, rather than an adult-controlled rehearsal process.” 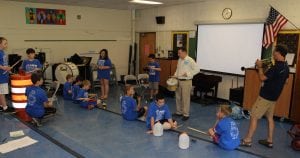 Greg Smith (far right) and percussionist Eric Starr lead the Lost and Found Orchestra during fifth-grade arts day at Haldane in 2014 (file photo by A. Rooney)

The curriculum, overseen by newly hired music teacher Dan McGroarty, is taking place now, with a performance scheduled for the spring.

Smith’s youth orchestra, which he is organizing with violinist Evans, who lives in Garrison, will begin in early March with rehearsals at First Presbyterian Church in Cold Spring followed by a concert in April or May. (For information, email Smith at [email protected] or call 917-449-8814.)

“I want to show kids how much fun it is to be in an orchestra,” says Smith, an advocate for music education. When his son entered kindergarten at Haldane, Smith helped Deb Contini, then head of the music department, to create a brass ensemble for the elementary school. That initial group of students, now in high school, is still at it. “It’s sad to me that this country has let music education go the way it has,” Smith says. “Arts instruction gives kids vision and confidence.”