Grace Kang says she has four “children” and on March 4 she will add a fifth in Cold Spring with the opening of her Pink Olive boutique. It joins two siblings in Brooklyn and two in Manhattan.

Pink Olive, which has taken over the former Indigo Chic location at the corner of Main and Fair streets, strives with its stock and décor to attain “relaxed happiness,” says Kang. 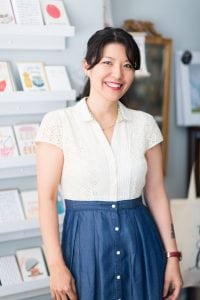 It will feature a curated collection of “little things” — paper goods, baby gifts, candles, bath and spa items and jewelry, most of it produced by designers who submit their products for consideration.

A California native who graduated from Cornell with a bachelor’s degree in textile and business (“I created my own curriculum,” she explains), Kang always had a passion for retail. She worked at The Gap when younger and says she “loved the vision there and learned that things don’t just happen to be in a particular store. It’s a marriage of creativity and business acumen — you need both.”

After graduating, she was a buyer at Bloomingdale’s for seven years. “It was almost like running a small business within a company,” she recalls. “Part of it was bringing in emerging brands, which is just what I do now with Pink Olive.”

Kang opened her first Pink Olive in 2007, a year before the economic downturn, and her second store just before it. “Babies kept us in business,” she says. Although people did not have as much disposable income, “they are still buying, just more thoughtfully and intentionally.” 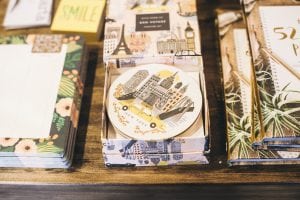 Her Williamsburg branch attracts the youngest clientele, while Park Slope caters to parents in their 30s. The Manhattan stores focus on apartment decorating, with lots of affordable art prints. The Cold Spring store will lead with paper goods. “For this Hudson Valley store, I have ideas, but they are always malleable,” she says. “You learn about the customer.”

Once she decided to expand into the Hudson Valley (she and her husband have a weekend home in Warwick), she scouted a number of locations, including Beacon, but Cold Spring was always at the top of the list. When the Indigo Chic space became available, “you could see the potential,” she says. “Plus, it has pink all around it: a good sign!”

Kang is aware of the challenges of the winter months for Main Street merchants. “I’m going in knowing that,” she says. “But, our city stores, especially Brooklyn, slow down in the summer, so I’m hoping the peaks and valleys will naturally alternate between the two.”

While Pink Olive has an online store at pinkolive.com, Kang says her focus remains on brick and mortar. “It’s easy to enter the online world, but harder to sustain it,” she says. “A lot of our customers are very tactile. They want to come in and take a look, reaffirming their purchasing decisions.” 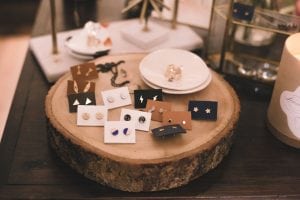 Jewelry is part of the mix at Pink Olive. (Photo by Kevin Almeida)

With five stores, Kang admits to being stretched thin. “In the beginning, I kept everything in my head, and you do need to get things onto paper and create processes,” she says. “The second store pushed me to learn the ropes of relying on other people. The biggest lesson is allowing your staff to make mistakes when you could have jumped in. If you don’t, they wind up not trusting their own ability.”

Kang insists there won’t be a sixth Pink Olive. (Cold Spring in 2014 banned retail businesses that have 10 or more locations.) It’s hard to imagine now, anyway, as she readies her latest for its opening.

“We’ll be transforming the back into a garden, adding displays in the side window area, taking the awning down in front to allow more to be seen from the large windows — a key factor — making it ours,” she says. “We want it to be a calm place, whisking people away.”

One thought on “Pink Olive Arrives”