Cold Spring Mayor Dave Merandy won at the polls for the second time in a week, prevailing in the battle of absentee ballots on March 28 by a 21 to 20 margin, assuring his return as head of the village government.

The absentee-vote count, held at the Putnam County Board of Elections office in Carmel, gave Merandy a final total of 390 votes, or 52 percent. Challenger Alison Anthoine received 367 votes, a difference of 23 votes. They had been 22 votes apart on Election Day.

Sixty absentee ballots had been distributed, and 40 were returned before the polls opened. To be counted, any outstanding ballots had to be postmarked by March 20 and received by the board within seven days following the election. The board apparently received only one ballot after March 20.

To become mayor, Anthoine would have needed to win the absentee votes by a wide margin. Both candidates were at the Board of Elections office for the count. 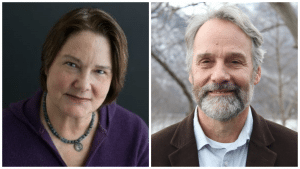 After his victory was confirmed, Merandy said he had been “cautiously optimistic” about the March 28 count. “We thought we had the numbers,” he said. “We had everything down pretty tight.”

Asked how the close race might affect his second term, Merandy said, “I have to figure out why people wouldn’t vote for me. It seemed like we had gotten a lot accomplished.” He also said there was “a little bit of a mystery” to the slim margin, before adding, “I don’t think it helped that Mr. Guillaro sued at the last minute,” a reference to a $2.5 million suit filed in federal court against the village on March 15 by Butterfield developer Paul Guillaro that named Merandy.

“We’ll try our best and keep going,” the mayor said. “Hopefully our record will speak for itself. I might have to get out there a little more.”

His challenger took her loss in stride. “I’m disappointed but elated,” Anthoine said, referring to her near-victory as a first-time candidate. Asked if she might run for office again, she said, “I don’t know what I’ll do yet. I’ll figure out how I can have an effect.” 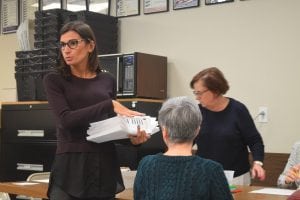 Andrea Basli, deputy commissioner of the Putnam County Board of Elections, with completed absentee ballots prior to the count (Photo by M. Turton)

Anthoine, the former president of the Cold Spring Area Chamber of Commerce, said that during the campaign she received phone calls from residents “who have never felt empowered to talk to the village government before, at least in this past go-round. There’s a chance here to still build bridges and make village politicians aware of things that people haven’t felt comfortable talking about.”

Absentee ballots were not a factor in the race for two open village trustee seats, won by the incumbents. Fran Murphy received 34 absentee votes for a total of 503 and Marie Early got 22 for a count of 420. Challenger Peggy Schatzle received 21 for a total of 348.