After more than 90 minutes of public comment, the Philipstown Town Board on April 6 narrowly adopted a resolution to ensure “equal protection” to all residents, regardless of immigration status, and forbid town employees from participating in arrests by federal immigration officers.

The resolution passed 3 to 2. The meeting was moved from Town Hall to the Haldane school auditorium to accommodate the audience, which numbered about 200 people. 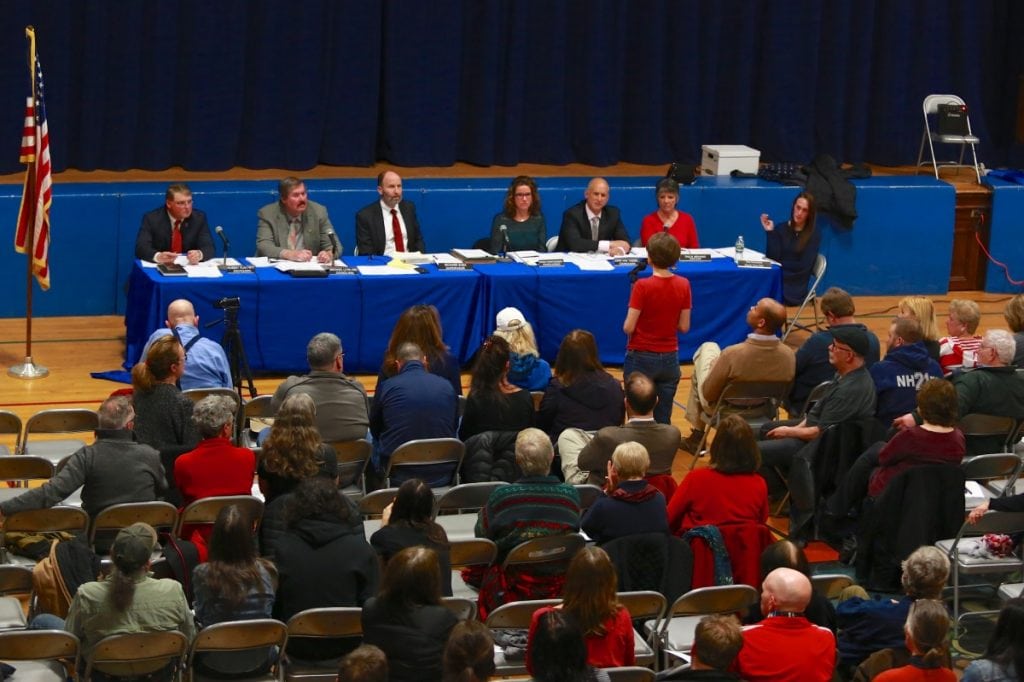 Although listed on the agenda as a measure “declaring Philipstown a sanctuary town,” the resolution does not include the word sanctuary. Instead, it speaks of upholding “the rights of all,” regardless of race, religion, ethnicity, gender, sexual orientation and immigration status.

On April 3, the Beacon City Council unanimously passed a similar resolution declaring the city to be “welcoming, safe and inclusive” but also avoiding sanctuary. President Donald Trump has threatened to deny federal funds to municipalities that declare themselves to be sanctuaries.

“I know this town is full of good people whose hearts are in the right place” and whose values include helping others on a daily basis, Supervisor Richard Shea said when introducing the resolution. “It’s important to reinforce those values, let people know where we stand. I feel very strongly about that. To people who’ve been given much, much is expected in return, to help the most vulnerable. And to support basic human dignity through our actions is vital at this time.” 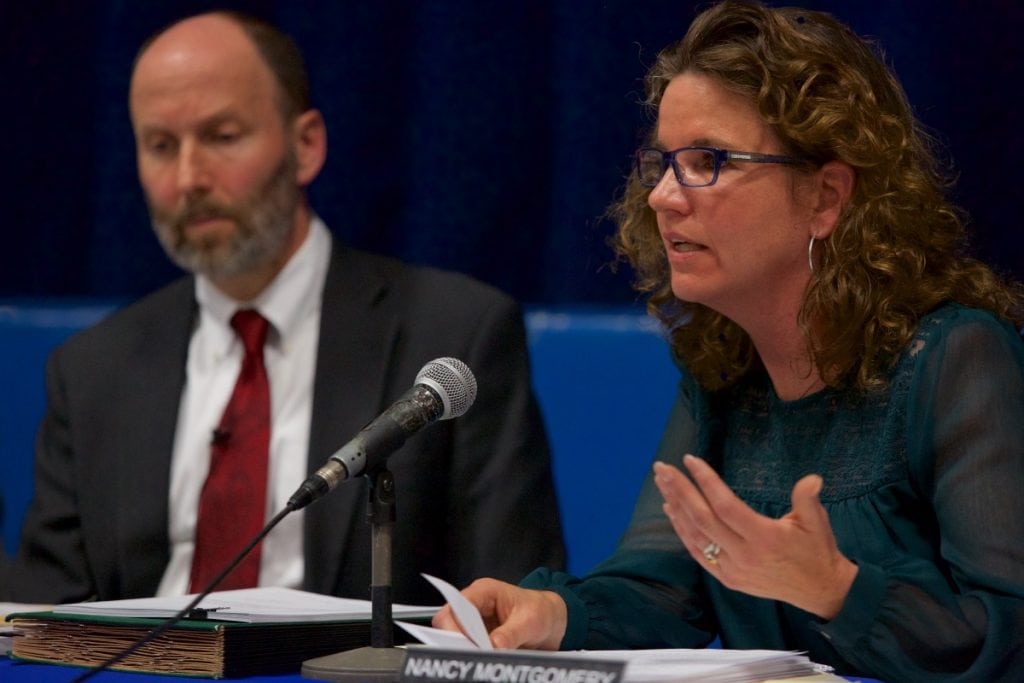 Councilor Nancy Montgomery makes a point during the discussion about the resolution. Supervisor Shea is in the background. (Photo by Ross Corsair)

“This, to me, is way outside of anything we should be involved in,” Van Tassel explained. He also expressed concern that passing the resolution could jeopardize federal money for town projects.

The resolution states that any Philipstown department, officer, employee or representative acting in an official capacity, unless required by state or federal law or a judicial order, cannot:

Town Clerk Tina Merando observed that the town does not ask for or record the immigration status of residents seeking permits or services.

In a statement read by Putnam County Legislator Barbara Scuccimarra, Sheriff Donald Smith said he that he and his counterparts nationwide are concerned because “criminal illegal aliens have been allowed to prey on our citizens and make us less safe.” Nevertheless, in Putnam County, he said, “illegal aliens who report a crime committed against them or who are witnesses to a crime are not reported to Immigration and Customs Enforcement.” His department “reports to ICE only those people involved in criminal activity.” 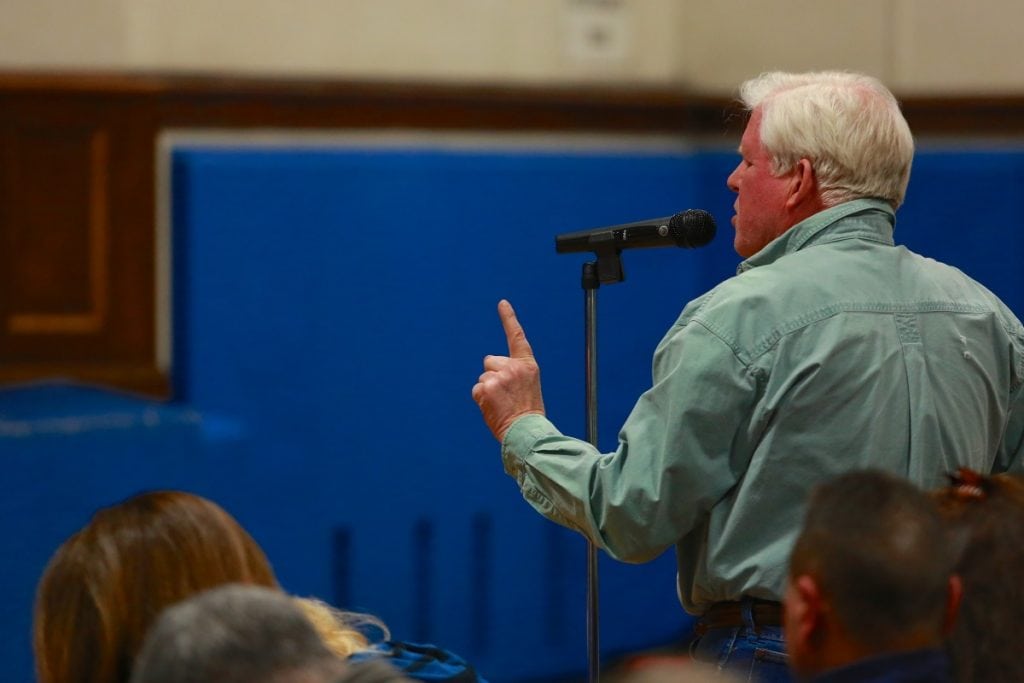 According to Shea, “nothing in this is intended to undermine law enforcement officers. There’s nothing radical about this document, no departure from the norms of society.”

A number of audience members expressed their agreement, and disagreement, with that sentiment.

Cindy Trimble agreed that the resolution reflects community values, though “I’m happy this [text] doesn’t include the word sanctuary” because of the threat of losing federal funds.

Julia Famularo noted that being in the country illegally is a violation of civil, not criminal, law. (Entering the country without authorization is a misdemeanor, but many immigrants enter legally and overstay their visas.) “We have friends and neighbors who don’t need to be prosecuted merely for their immigration status,” she said. She also said she had concluded from her own research that “sanctuary cities are legal.” 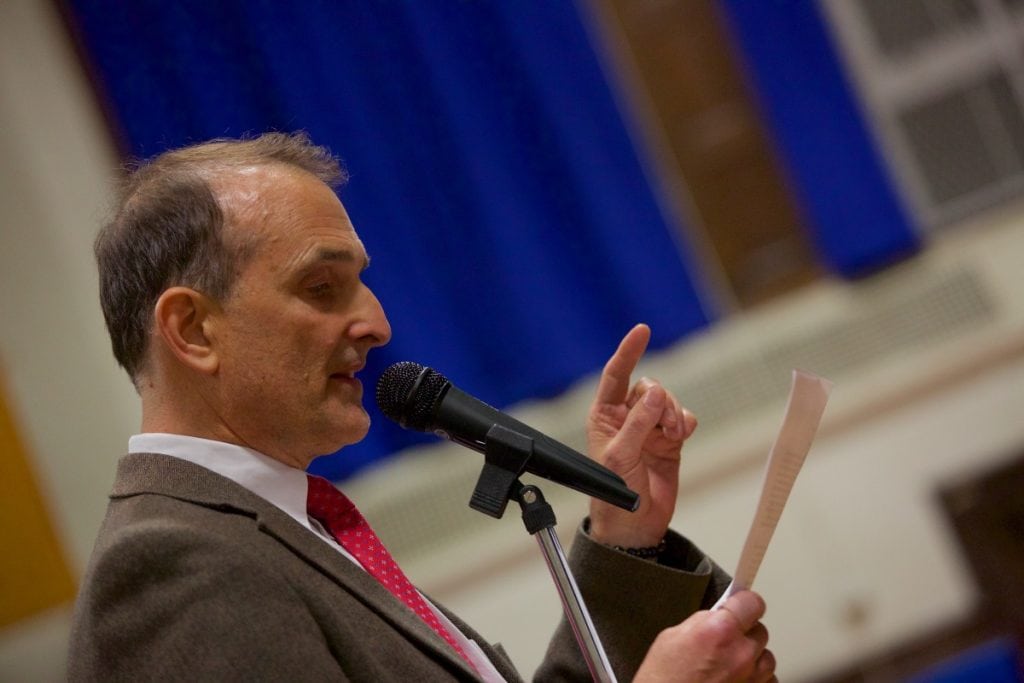 Kenn Sapeta read from an article by conservative writer David Horowitz to voice his opposition to the resolution. (Photo by Ross Corsair)

Kenn Sapeta said he opposed the measure, reading from an article by David Horowitz in which the conservative writer called the sanctuary effort “the most massive movement of sedition since the Civil War.”

The text of the resolution passed by the board on April 6. The lines in paragraph six were stricken before the vote after a suggestion by resident Cindy Trimble, who argued it presumed local police engaged in profiling:

Whereas the Town of Philipstown seeks to make clear our commitment to the rights of all members of our community regardless of their race, religion, gender, ethnicity, sexual orientation or immigration status and

Whereas the Town of Philipstown recognizes the importance of diversity as a component of the American experience and that we as a nation collectively benefit from two core values enshrined in our constitution; tolerance and inclusion and

Whereas the Town of Philipstown upholds the value of equal protection under the law for all its residents regardless of race, religion, gender, ethnicity, sexual orientation, or immigrations status and

Whereas public health, public safety, education and economic development in the Town of Philipstown require cooperation between community residents and local law enforcement and

Whereas the Town of Philipstown commits to fostering an atmosphere of tolerance and acceptance that truly make America great.

Declaring that “I believe in the rule of law,” Rodney Dow predicted problems “if we open the doors.” He challenged Shea to pledge to resign if an undocumented immigrant commits “a heinous crime” in Philipstown.

“I would not be willing to step down” for supporting the resolution, Shea responded, contending that no connection exists between the board’s action and the commission of violent crime by immigrants. 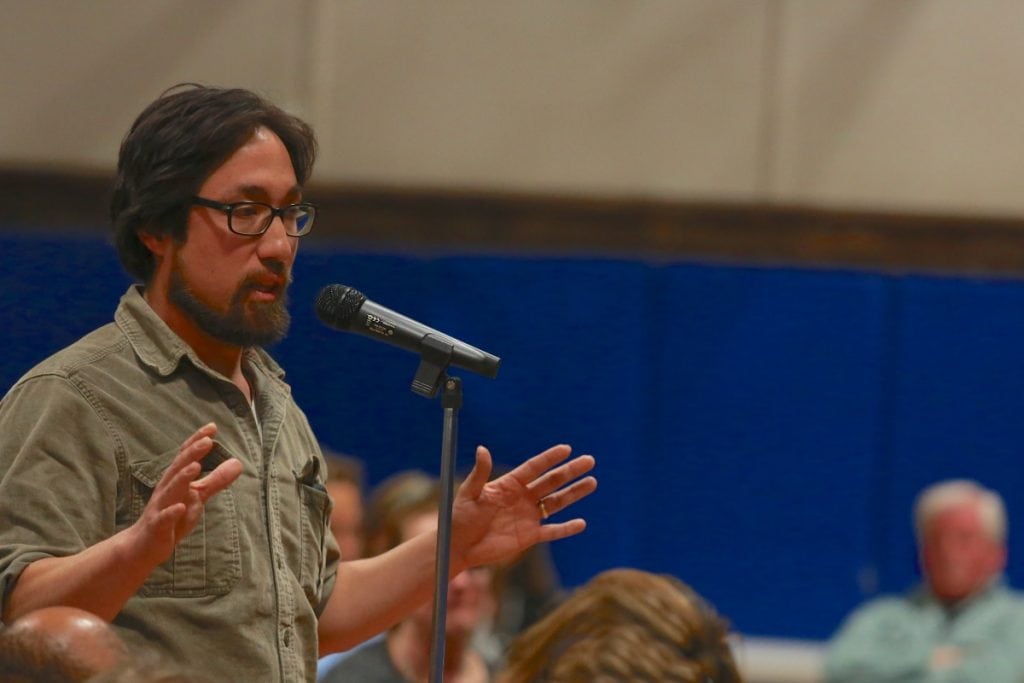 Jason Angell spoke to the Philipstown Town Board on April 9 in support of a “sanctuary city” resolution. (Photo by Ross Corsair)

Jason Angell said that residents should not conflate terrorism with the question of undocumented immigrants. “It’s not about stopping ISIS [with] local law enforcement,” he said. Instead, he argued that the U.S. created a system where undocumented immigrants were recruited for decades because they provided cheap labor but that they are no longer welcome because big business has realized it’s even less expensive to build factories in Mexico and elsewhere and “bring the work to them.”

Nelsonville’s incoming Mayor Bill O’Neill scolded the board, characterizing the resolution as “one more move to undermine respect for the laws of this country” and “a meaningless gesture which is an insult to this community.”

He noted that two members of the board (Shea and Van Tassel) are contractors and suggested the resolution “could be construed” as a way to shield undocumented workers and “provide a source of cheap labor.”