The Putnam County Visitors’ Bureau plans to publish a visitor’s guide, distribute online commercials and revamp its website in an effort to attract more tourists, Executive Director Bruce Conklin told legislators on June 20 during a meeting of the Economic Development Committee.

He said a consultant’s report compiled for state officials found the economic impact of tourism in the Hudson Valley to have grown steadily between 2012 and 2015 (the most recent data available), including in Putnam County, particularly in the food and beverage, retail and recreation categories. 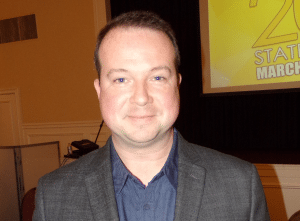 “This is illustrative of the farm-to-table movement, the trend toward supporting local craftspeople, and the increased popularity of outdoor activities such as kayaking, hiking and cycling,” said Conklin, a Putnam Valley native who was hired in March to succeed Libby Pataki. “These areas will be a point of focus in future advertising.”

The nonprofit visitors’ bureau is funded by $141,996 from the county and $60,000 from the state. Conklin earns $60,000 annually and former interim director Frank Smith earns $50,000, although it is not clear if he continues to be employed by the bureau with Conklin’s arrival. After claiming that  the organization is a not a county agency, Smith and Barney Molloy, who chairs the volunteer board of directors, declined in March to answer questions when a legislator asked for details about its finances.

Conklin told legislators that, based on the consultant’s report, the county tourism industry supports more than 1,000 jobs and saves each household an average of $214 in taxes each year because of sales taxes collected from visitors.

Advertisements placed by the bureau in regional publications such as Hudson Valley Magazine, Chronogram, Upstater and The Valley Table that direct visitors to tourputnam.org reach about 810,000 people, he said, and about three quarters of the people visiting the website are there for the first time.

The bureau is also targeting its ads to residents and visitors in New York City, and has hired a firm to place promotional cards in 10 kiosks in Manhattan for people “looking to escape the city for a day” on Metro-North. He noted that funding the tourism office receives from the state as part of its “I Love New York” campaign must be used on advertising outside of the county.

Conklin said the visitors’ bureau has produced a 30-second commercial to stream online and is working on seven 15-second clips to highlight activities in Putnam such as camping, kayaking, historical experiences and dining.

The printed visitors’ guide and the revamped website should be ready by Sept. 1, he said. His presentation is posted at tourputnam.org.