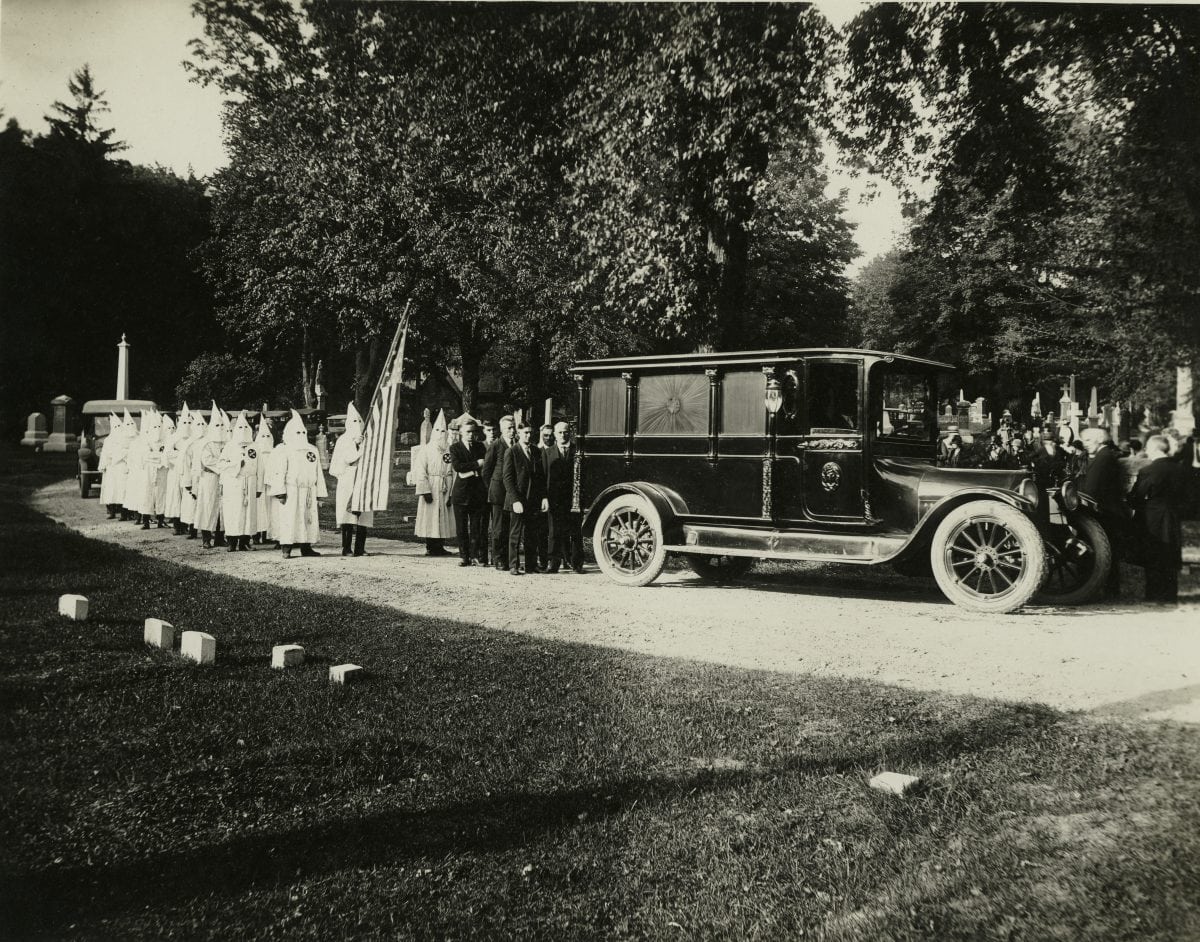 The Ku Klux Klan, which has been in the news lately, had its heyday in the 1920s, following the social upheaval of World War I. Although there was pushback from millions of Americans, white supremacists were embraced, or at least tolerated, in many places in New York state, including the Highlands, and across the country.

The Klan presented itself as a patriotic, fraternal organization while targeting Catholics, Jews, immigrants and blacks, in that order. According to social historians, its rhetoric was appealing to dispossessed white Americans who longed for a simpler time when everyone “knew their place.”

At its peak in 1924, the Klan had 6 million members. By 1930, that had dwindled to 30,000 (today it is 3,000 to 6,000, in about 190 chapters). Historians generally blame corruption within the organization and exposure of its hypocrisy by newspapers and civil-rights activists for the sharp decline. Here are news items gleaned from local newspapers from the time:

The Republican County Committee, led by U.S. Rep. Hamilton Fish, met in Carmel to adopt its platform, which included a resolution denouncing the Klan as “un-American” because of its campaign to “to arouse religious and racial hatred.” The resolution also urged “drastic state and national legislation to suppress its pernicious activities which threaten to undermine the Constitution and respect for law and order.” (Putnam County Courier)

The Cold Spring Recorder reprinted an editorial from The Christian Advocate that denounced the Klan: “America is as much the land of the Jew, the Catholic, the African and the Mohammedan as it is of the Anglo-Saxon, the Methodist or the Baptist.”

After a 12-foot cross was lit on Burned Hill at 11 p.m. at the conclusion of the annual firemen’s parade, the Beacon Daily Herald asked, “Has Beacon a branch of the Ku Klux Klan?” Newburgh is said to have about 600 members, but the paper concluded Beacon residents were joining the Peekskill branch.

A burning cross visible atop Bull Hill was thought to have been placed either by “the ridiculous Ku Klux Klan” or pranksters. (Cold Spring Recorder)

During a Sunday evening service at First Methodist Church in Cold Spring, a dozen hooded Klan members marched into the sanctuary double-file and silently presented a purse with $50 in gold to the Rev. Jonas Inman. He declined to accept it unless the men removed their robes and presented the offering as “plain citizens.” Instead, the Klansmen re-formed their double column and marched out. (The Evening Star, Peekskill) 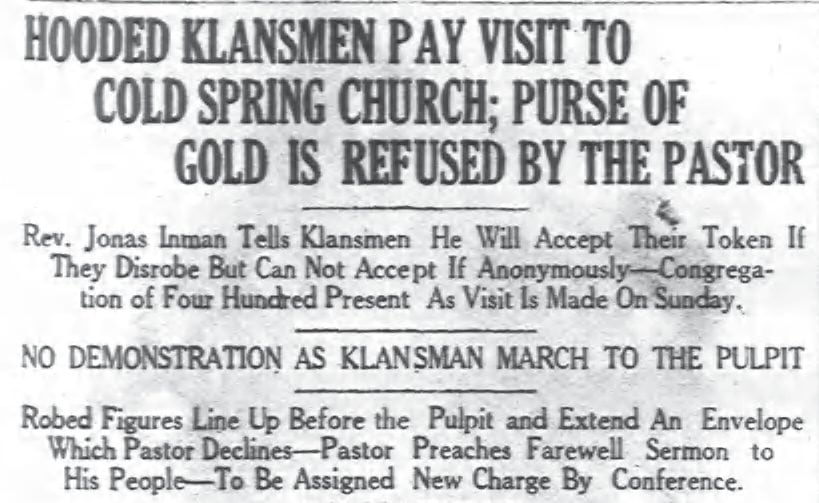 Klansmen buried one of their members from Nelsonville at the Cold Spring Cemetery. 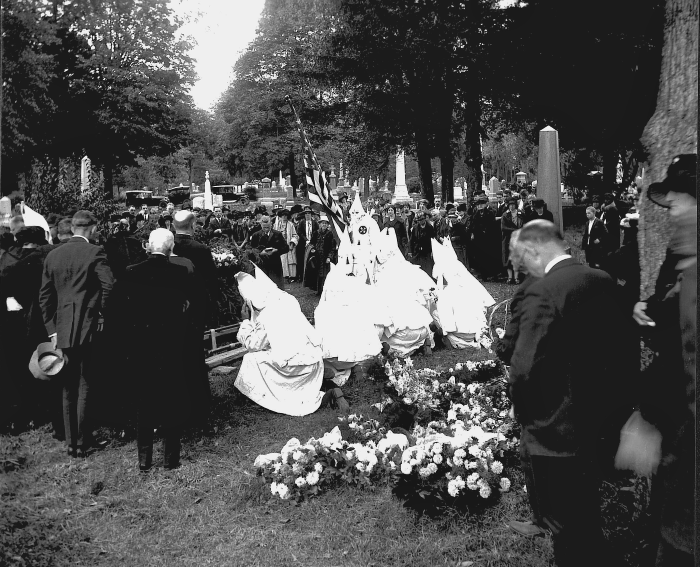 As many as 7,000 people assembled for the second annual outing organized by Peekskill Klan No. 203. Armed with baseball bats, Klansmen patrolled the boundaries of the event. (The Highland Democrat, Peekskill)

Four hundred robed Klansmen gathered near the former motorcycle race course at the upper end of East Main Street in Beacon, where at 9:30 p.m. they burned a 25-foot cross and heard addresses by men “thought to be high officers in the order” while hundreds of spectators looked on. The state police directed traffic. (Beacon Daily Herald)

A Beacon man was arrested and charged with “disturbing a religious meeting” after he heckled the Rev. Leonard Appledorn during a Sunday service at the Dutch Reformed Church when the minister denounced the Klan. The pastor asked that the man be removed, and two parishioners walked him out by the arm. (Poughkeepsie Eagle-News)

The Klan organizations of Westchester, Putnam and Dutchess counties scored a coup by convincing Imperial Wizard Hiram Wesley Evans to speak at the annual outing near Peekskill. The Klan claimed 24,000 men, women and children were in attendance, although a reporter estimated the crowd at closer to 10,000. Highlights included a drill by the Klan Auxiliary of Beacon and another by 1,000 white-robed figures. The day ended with fireworks. (Putnam County Courier)

In a straw poll held in Nelsonville, “where Klan sentiment is high,” there were seven votes for Al Smith, the Democratic candidate for U.S. president (and a Catholic), and 53 for incumbent Herbert Hoover. (Putnam County Courier)

Handbills promised to have 10,000 parking spaces available for the annual field day near Peekskill and asked, “Who said the Klan was dead?” (Putnam County Courier) Apparently many people had reached that conclusion.

11 thoughts on “Looking Back: The Local Klan”