The boats will be back: The Seastreak cruise line has requested permission to dock on the Cold Spring waterfront again this fall.

At its Aug. 22 meeting, the Village Board of Trustees reviewed a proposed schedule provided by the company, which operates Hudson River excursions that depart from Highland, New Jersey, and New York City. It began its fall cruises to Cold Spring in 2013.

Each boat has a capacity of 500 passengers. 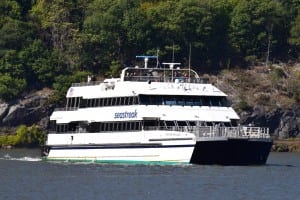 Each Seastreak boat can carry up to 500 passengers. (File photo by M. Turton)

Mayor Dave Merandy said he opposes allowing a third boat. Unlike the number of hikers who pass through Cold Spring on weekends, he said the dockings are “something we can actually control.”

Trustee Lynn Miller, co-owner of Go Go Pops on Main Street, said that even with the staggered arrival times, a third boat would mean up to 1,500 passengers in the village for part of the day. “There aren’t enough seats in the restaurants,” she said. “Everyone ends up disappointed.”

Seastreak passengers provide robust business for Main Street shops, although for restaurants and cafés it can be a headache because within minutes of the first boat’s arrival seemingly every seat in the village is taken. Those who aren’t seated during the first wave wait impatiently outside, or go hungry. For that reason, restaurant owners suggested a staggered schedule.

Merandy said he would like each boat to leave the dock after dropping off passengers, pointing out that the large vessels block scenic views. He also would like the company to give notice of the number of passengers expected on each boat.

The mayor suggested approving one boat per day initially while negotiations continue. However, the board took no action.

The fall cruises provide revenue not only for local businesses but for the village, which charges $6 per foot each time one of the 140-foot vessels docks. Eleven dockings  would generate a total of $9,240. The rate increases by $2 per foot if the boat remains at the dock.

But, Merandy argued, “we shouldn’t just be thinking about money.” After it was noted that the first two Saturday cruises would conflict with weddings planned for the bandstand area, he added, “weddings are part of the charm of the village.” The village charges $250 for riverfront weddings.

Deputy Mayor Marie Early will continue discussions with Seastreak officials, including a request to revise the schedule to avoid conflict with the weddings.