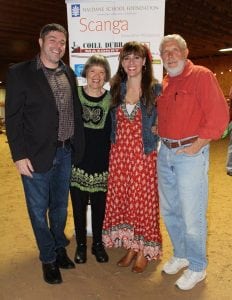 The proceeds will fund educational enrichment programs at Haldane schools. More than $9,500 was raised during a silent auction that included an architectural drawing of the high bidder’s house by Madeleine McGinley and tickets to Kinky Boots on Broadway. The tally also included $3,000 from a pledge drive to pay for field trips, which had been scaled back due to budget constraints. To donate, see haldaneschoolfoundation.org.