Nelsonville’s cell tower battle narrowed from two fronts to one on Monday (Nov. 20) when the Nelsonville Village Board announced it had withdrawn its offer of land on Secor Street as an alternate location for a cell tower proposed for Rockledge Drive.

Greeted with applause at the meeting, moved to Philipstown Town Hall to accommodate the audience, the decision turns village attention back to Rockledge. There, on a 9.6-acre parcel, Homeland Towers LLC wants to erect a 110-foot tower above the Cold Spring Cemetery and near residences. (Nelsonville’s zoning code permits cell towers in residential areas.) A dead end, Rockledge connects to Moffatt Road, which twists uphill from Route 9D at the southern end of Nelsonville and Cold Spring. 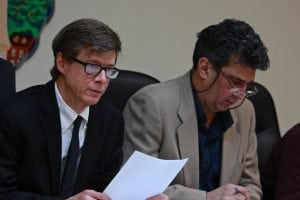 William Rice (left) and Steve Marino, who chair the Nelsonville Zoning Board of Appeals and Nelsonville Planning Board, respectively, go over documents at a joint public hearing their boards opened on Nov. 15 on the proposed cell tower on Rockledge Drive. (Photo by Ross Corsair)

The Rockledge application is being reviewed by the Nelsonville Zoning Board of Appeals and the Planning Board, which on Nov. 15 opened a joint public hearing (video below), scheduled to resume at 7:30 p.m. on Tuesday, Nov. 28, at Town Hall. To proceed, the project must obtain a special-use permit from the ZBA and site-plan approval from the Planning Board.

According to Robert Gaudioso, the Homeland Towers attorney, because Nelsonville did not contest anything in the Rockledge application within 30 days of receiving it, the village must approve or deny it within 150 days, or Dec. 17.

Rep. Sean Patrick Maloney, who represents the Highlands in Congress and lives off Moffatt Road, asked Homeland Towers in a Nov. 14 letter to work with Nelsonville and extend the deadline by 60 days. He noted that review of the application is underway but “is extremely taxing for this small community and requires a great deal of their time and limited resources.” In addition, he wrote in the letter, also sent to the Federal Communications Commission, “there are several complicated issues surrounding the proposed site’s historical nature that make the process even more difficult and resource-intensive.”

Homeland Towers, which represents Verizon Wireless, also wants to construct a tower on Vineyard Road, near the intersection of Routes 9 and 301, an area under jurisdiction of the Town of Philipstown. Like the proposed Rockledge tower, it is fiercely opposed by many residents.

Amid the furors in October, the three-man Nelsonville Village Board suggested that Homeland Towers put the tower on a wooded, 4-acre, village-owned tract bordered on one side by Secor Street and on another by the American Legion and Philipstown Volunteer Ambulance Corps buildings on Cedar Street. The site also is 975 feet from the Haldane Elementary School. At a Village Board workshop on Nov. 8, residents and the Haldane school superintendent vigorously objected to the Secor Street proposal.

Twelve days later, the Village Board abandoned it. 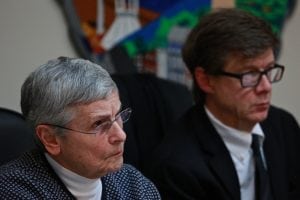 Judy Meyer, who serves on the Nelsonville Zoning Board of Appeals, and William Rice, who chairs the ZBA, listen to comments during a public hearing convened on Nov. 15. (Photo by Ross Corsair)

Trustee Alan Potts explained Monday night that the board had agreed that using the Secor acreage “would not proceed without support from the Nelsonville community.” He cited objections from residents “regarding the visual and property-value effects” of having a cell tower there. He said Homeland Towers had been informed.

Mayor Bill O’Neill encouraged the residents “to hold your coalition together to oppose the Rockledge tower” and help “defend our beautiful and historic cemetery” and the children at the nearby Manitou School at Moffatt Road and Route 9D, though the allowable reasons for vetoing a cell tower permit do not include fears about health.

Trustee Thomas Robertson assured the audience that the mayor and trustees are always open to residents’ concerns. “You have to understand that the three people sitting before you are the most sincere in Nelsonville,” he said. “Nothing in our makeup is vicious. We love this place and are trying to help it.”

Michael Bowman, who served on the Cold Spring Board of Trustees before moving to Nelsonville, expressed appreciation to O’Neill, Potts, Robertson and Village Clerk Pauline Minners “for listening to your neighbors. You made the right decision.” He said he and other Secor tower opponents now “are going to get involved at Rockledge.” 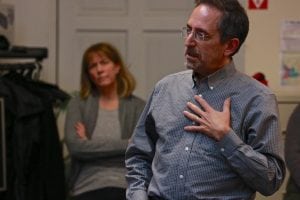 Bowman also asked the Village Board to make the Secor site permanent parkland, “as it was meant to be.”
O’Neill promised that the board would carefully weigh possibilities.

Five days before the Village Board meeting, opponents of the Rockledge tower proposal crowded Town Hall for the joint ZBA-Planning Board hearing in which the audience filled chairs, nearly every available inch of floor space and the doorway and stairwell.

Many of the issues raised previously in cell tower forums surfaced anew, including the question of whether enough of a “significant gap” exists in local wireless capabilities to justify one or two new towers.

Planning Board Chairman Steve Marino told Gaudioso, the Homeland Towers attorney, that residents “don’t understand where the gap is and why a tower in any of these areas is necessary.” Planning Board Member Dennis Meekins similarly wondered what level of gap is acceptable. 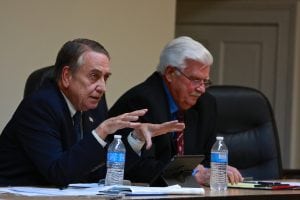 Gaudioso replied that having a few houses with iffy coverage is of relatively little consequence while spotty coverage along a highway like Route 9 “is a significant gap.” He also said a “significant gap” must be addressed not only to avoid phone-call problems but to ensure the flow of “data service, phone calls over data” and third- and fourth-generation wireless communications, “all combined in a network.”

Moreover, Gaudioso said, denying a tower application because Nelsonville thinks no gap exists “would be a real bad reason, because it’s not a criterion in your code and not a criterion we have to meet.” Furthermore, he said, federal law stipulates that “all communications may not be prohibited” and “even if there is a good reason to deny” a tower permit, “you have to find a way not to prohibit it” or must “find an alternative” site.

The provision he cited, Section 253 of the 1996 Telecommunications Act on “removal of barriers to entry,” says that “no state or local statute or regulation, or other state or local legal requirement, may prohibit or have the effect of prohibiting the ability of any entity to provide any interstate or intra-state telecommunications service.”

The wording does not specifically mention cell towers, or state that local governments must guarantee companies freedom to use them to deliver all types of service everywhere, including inside cars on roads.

Philipstown Supervisor Richard Shea advised the Nelsonville boards to be wary of Gaudioso’s “compelling arguments.” The lawyer “is paid to” make them, “as is every other ‘suit’ over there,” Shea said, speaking of Gaudioso’s associates from Homeland Towers, Verizon, AT&T and other firms. “Homeland Towers is in the business of putting up towers to generate profit and revenue.” 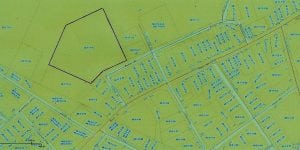 A rough map shows the location of the Nelsonville-owned tract, marked 38-17-1-6, that village officials suggested as an alternative site for the cell tower proposed for Rockledge Drive. (Village of Nelsonville)

A tower in a place like Rockledge detracts from the town’s scenic beauty “and if we compromise that, everything falls apart,” Shea said. “Don’t be fooled, because their job is to get this tower in. Our job is to protect what we hold dear.”

Sandy Saunders, of Garrison, again proposed that the tower go on a property he owns on Brook Street. Gaudioso replied that it’s in a commercial zone, where, under the Nelsonville village code, cell towers are banned.

Maria Marrison said the Rockledge tower would wreck the views from the Manitou School, which she established. “It’s affecting the nature of my historic property, of my school. I urge you to say ‘no,’” she told the boards.

“We refuse to be one of those villages” that acquiesces to telecommunications giants, Healy Road homeowner Eliza Nagel informed the Homeland Towers delegation. “We will not be cowed by your threats of lawsuits.”

“There are court cases out there that support our situation,” said Bevan Harris, of Moffatt Road. At a time when the nation is badly fractured, he added, “we need to stay together as a community.”

Video of Nov. 20 Village Board meeting by Gregory Gunder, courtesy of Village of Nelsonville

Video of Nov. 15 ZBA/Planning Board meeting by Gregory Gunder, courtesy of Village of Nelsonville

One thought on “After Outcry, Nelsonville Drops Secor Tower Offer”