As a particularly nasty flu virus spreads across the state and country, Gov. Andrew Cuomo on Jan. 25 signed an executive order to allow pharmacists to administer vaccines to children and teenagers. 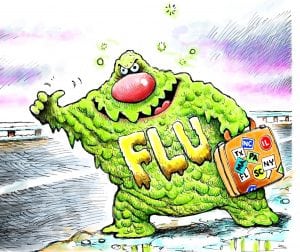 The influenza A strain known as H3N2 is the most prevalent type of flu circulating in the U.S. In Putnam, there have been 109 confirmed cases of Influenza A and 63 of Influenza B as of Jan. 29, according to the Department of Health, including 10 cases of A and two cases of B in Philipstown. Dutchess County recorded 385 cases of A and 124 of B through Jan. 27.

During the week ending Jan. 27, nearly 12,000 cases of the flu were confirmed by lab tests statewide, a 50 percent increase over the previous week, while 2,221 people were hospitalized, a 21 percent increase. Both were the highest weekly numbers since reporting began in 2004.

Get vaccinated. The current shots protect against three viruses that research months ago suggested would be most prevalent. But even if you catch a different bug, a vaccine can reduce its severity. The CDC recommends anyone 6 months of age or older be vaccinated.

Stay home from school or work when sick. People with the flu are infectious for up to seven days after symptoms begin.

Unlike some viruses, influenza is easily killed by soap and hot water.

Carry an alcohol-based hand sanitizer with at least 60 percent alcohol.

Do not cough or sneeze into your hands. Instead, cover your mouth and nose with a tissue.

Putnam and Dutchess counties have so far not been hit as hard as Westchester or some western counties. Through Jan. 27, the infection rate in Dutchess, was 173 per 100,000 residents, according to the state Department of Health. In Putnam there have been 146 cases per 100,000, while Westchester has had 276 per 100,000. The state average is 186. 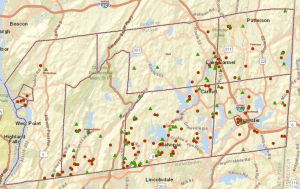 A map produced by the Putnam County Health Department shows reported flu cases through Jan. 29. The red dots are Influenza A and the green triangles are Influenza B.

According to the federal Centers for Disease Control and Prevention, every state except Hawaii has suffered “widespread” influenza. Since Oct. 1, there have been nearly 37,000 confirmed cases across New York, including more than 9,000 people who were hospitalized and one child who died. In addition, a 10-year-old from Connecticut on his way home from a hockey tournament died on Jan. 14 at a Catskills hospital of pneumonia brought on by Influenza B.

Because of the large number of cases, the Putnam County Health Department held an emergency vaccine clinic at its Brewster offices on Jan. 30. No others are planned, but vaccinations are available by appointment by calling 845-808-1332. (The department has administered 3,611 flu shots to county residents since Oct. 1.) Dutchess County has not held any public clinics.

During last year’s flu season, there were nearly 13,000 flu-related hospitalizations in New York and eight children died. The World Health Organization estimates the flu kills as many as 500,000 people each year.

2 thoughts on “Flu Bug Doubles Down”