An arborist has recommended that the iconic copper beech located on the lawn of the Butterfield redevelopment be removed because it has deteriorated to the point it cannot be saved.

In an undated letter to Unicorn Contracting, the company developing the site on behalf of Butterfield Realty and developer Paul Guillaro, arborist Joshua Maddocks wrote that the tree “is beyond a point of positive regrowth and has survived its anticipated life span.” He recommended cutting it down and replacing it with another colorful tree. 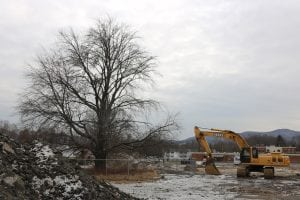 The copper beech was fenced off prior to construction. (Photo by M. Turton)

Matt Moran of Butterfield Realty forwarded Maddocks’ letter to Matt Francisco, who chairs the Cold Spring Planning Board, on Jan. 19. Francisco said it was discussed at the board meeting that evening.

On Jan. 22, Francisco said, he replied to Moran, asking that removal of the tree be delayed because its protection had been “a condition of approval on an active project” when the development’s site plan was approved by the board in 2015.

An easement also restricts the future owners of two homes that will be built as part of the project along Paulding Avenue from pruning the tree. The drip line for the copper beech extends over part of both residential lots. 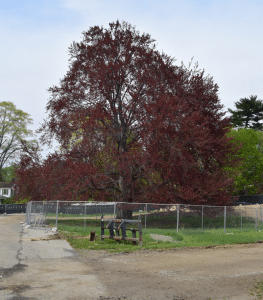 The copper beech was named one of the “five best trees in Philipstown” in an April 2016 article in The Current written to celebrate Arbor Day. (Photo by M. Turton)

Maddocks, who owns Garrison Tree Inc., said he has monitored and treated the tree since 2010 and that “it has never been in great shape.” Despite being treated for pests, fertilized and pruned, it “continues to be in a state of decline.” He also expressed concern about falling limbs.

At the Feb. 6 meeting of the Cold Spring Village Board, Mayor Dave Merandy said he would request a second assessment of the tree by arborists at SavAtree, the company that created a tree protection plan for the copper beech.

“It seems that the tree that was supposed to be protected and was a focal point during Butterfield approvals will shortly no longer be, sadly,” Merandy said. He added that in 2013, SavAtree felt that the beech’s condition was not a concern and that it was “savable” but that now, “four or five years later, it’s in need of being taken down.”

One thought on “Butterfield Beech Blues”