Students at Haldane, Beacon and Garrison schools plan to walk out of class on Wednesday (March 14) to take part in a 17-minute national protest to remember the 17 victims of the shooting last month in Parkland, Florida, and call for action against gun violence. 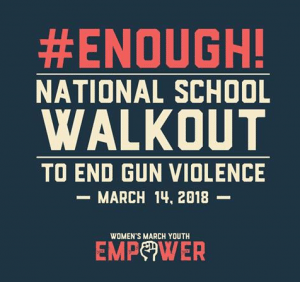 The ENOUGH National School Walkout is designed to “protest Congress’ inaction to do more than tweet thoughts and prayers in response to the gun violence plaguing our schools and neighborhoods,” according to Women’s March Youth Empower, which is coordinating the event. Protests are planned at more than 2,800 locations.

“Although a public school cannot endorse any particular sociopolitical cause, we see this event as having minimal disruption to the academic day, and our staff’s role will solely be supervisory to assure students’ safety,” Principal John Griffiths wrote in a note to parents.

“There will also be supervision within the school for any middle-school student who does not wish to participate,” he wrote. He said students told him they wanted to spend the time “considering how to make our immediate world more peaceful and to document their thoughts on a banner. Speaking with these representatives of our student body made me feel very hopeful for our future!”

In a letter to parents, Superintendent Diana Bowers noted that older students have expressed “a variety of thoughts and opinions” on the planned walkout. “Our goal is not to suppress voices or viewpoints, but to provide a safe and organized opportunity for expression,” she wrote. “Districts throughout the nation are concerned about the mass number of students congregated outside of schools at a specified time.”

She said that at 10 a.m., middle- and high-school students will gather to say the Pledge of Allegiance and name the victims who died at Marjory Stoneman Douglas High School in the Feb. 14 attack by a former student. “We will then read unity statements to encourage our students to work together, help one another and seek help for those in need,” she wrote. 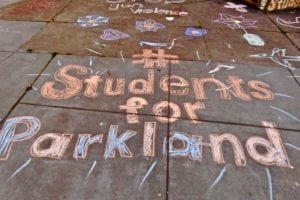 She said that students who leave the buildings after the “reflection period” will be disciplined under the student Code of Conduct, which include a warning or detention.

During lunch periods, the district will hold a discussion of school safety and mental health treatment, encourage students to write elected officials, create cards for schools that have been affected by shootings, and sign flags of support for Parkland. The district also has invited elected officials to meet with students on April 20, the anniversary of the Columbine High School killings in 1999.

The Haldane campus will be closed to visitors on March 14 after morning drop-off until about noon, she said.

Superintendent Matt Landahl said high school students who participate in the March 14 protest will not be disciplined. However, in a letter to parents, he said the district will not allow elementary or middle-school students to take part. He said parents may sign their children out of school to attend protests off-campus.

Landahl said the elementary-school day on March 14 will begin with a moment of silence to “think about ways to spread kindness and love in our school, community and the world.” At Rombout Middle School, students will participate in a moment of silence in their classrooms at 10 a.m. and social studies teachers will explain how to contact elected officials.

“We will not espouse any particular political views with this sharing but instead discuss the importance of elected representatives hearing from all of their constituents,” he wrote. He said the district would also supply materials for students to create cards of sympathy or support for the families of Parkland victims.

High school students may attend a 17-minute moment of silence at 10 a.m. in the auditorium, he wrote, where staff members and students will screen a slideshow to honor the victims. Classes will continue for students who do not wish to attend.

“Students who do leave the building at 10 a.m. to honor the victims and silently protest will be directed to a designated space and monitored by school staff for safety reasons,” he wrote, as well as a Beacon police officer.

Students who do not return to the building after about 20 minutes will be disciplined, he wrote.

A listing on the ENOUGH website says a protest is planned at Beacon High School at 10:15 a.m., but one of the organizers, Dana O’Malley, said because of the district restrictions, protestors plan to march at 10 a.m. from the CVS Plaza in Fishkill. A rally also is planned for Memorial Park in Beacon on April 20, the anniversary of the Columbine killings.

The Beacon City School District has no plan for activities on April 20, Landahl said, so students will not be allowed to leave class on that day.

Legally, students can be disciplined for cutting class for a protest, said the American Civil Liberties Union in an advisory for educators, but the punishment can’t be harsher than for missing it for other reasons. In Nevada, the ACLU says some high school students have been threatened with removal from sports teams or not receiving their diplomas if they participate in the March 14 protest. In Georgia, a high school sophomore received a five-day suspension in early March for walking out of school for 17 minutes.