The Philipstown Zoning Board of Appeals on Monday (March 12) unanimously rejected plans for a home proposed for Douglas Lane on a lot split between the town and Nelsonville.

The property’s owner, developer Susan Green, designed the four-story, 3,300-square-foot home for the .55-acre Philipstown end of a total parcel of 1.4 acre. The parcel’s remaining approximately .9 acre lies in Nelsonville.

The gap between the required lot size and hers “is too huge” for a variance, said ZBA Member Paula Clair. 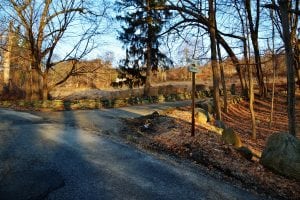 The Philipstown ZBA denied an application for a home proposed for the field in the distance, beyond the brick wall. (Photo by L.S. Armstrong)

After her colleagues voiced similar views, ZBA Chair Robert Dee called the discrepancy “the biggest sticking point.” Board members also expressed concern about an increase in impervious surfaces and run-off that might contribute to flooding at the intersection or allow septic overflows to reach a neighbor’s yard.

Green “is an experienced developer” building a home she planned to sell, Dee noted. He said that before purchasing land, an architect or builder typically reviews local laws. “I can’t believe that wasn’t done,” he added.

Earlier, the ZBA had discussed whether Green’s half-acre lot was created by land being “taken” by the Village of Cold Spring in 1966 for aqueduct access at a time when the zoning demanded rural home lots of at least 1 acre. Green’s lot was initially part of a 1.22-acre parcel before the village purchased its 0.67-acre aqueduct-access. 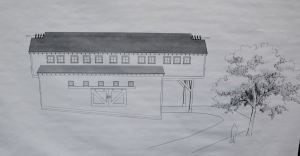 A drawing of a home planned for Douglas Lane  (File photo by L.S. Armstrong)

For the ZBA, Clair said Monday, “the question is, does ‘taken’ mean eminent domain? Or can it be more broadly interpreted to mean: for any reason bought, sold, or whatever?”

Dee cited a Cold Spring record that stated village trustees in 1966 voted to exercise an option to buy their section. He and ZBA Members Leonard Lim and Vincent Cestone concluded the land was purchased by Cold Spring in a normal transaction and that Green’s half-acre was left over from that sale. Clair and Granite Frisdenda disagreed. Green’s lot exists because Cold Spring’s land “was obviously sold, taken, whatever, for a public purpose,” Clair reasoned.

Daniel Richmond, an attorney who represents Green, said Wednesday that he and his client were “obviously surprised” by the vote and “think it constitutes clear, legal errors on multiple levels.” For instance, he said, a ZBA “can’t cave in to generalized community opposition” to a project. He said a lawsuit against Philipstown “is a very real possibility.”

In other business, the ZBA opened a public hearing on construction of a new WHUD radio tower-wireless telecommunications-cell phone tower, on Sky Lane.

After neighbors asked about security and possible damage to Sky Lane during tower construction, Dee continued the public hearing into April.

However, Dee and Gaudioso agreed that with input from consultants and the town’s building department, the neighbors’ questions should be easily addressed.