Represented Beacon in the state Legislature

Frank Skartados, the Greek immigrant and developer who served four terms in the state Assembly representing Beacon, died at age 62 on Sunday (April 15) of pancreatic cancer. The Democrat, who lived on a farm in Milford, had been diagnosed in late January and entered St. Luke’s Cornwall Hospital in Newburgh on March 24 with respiratory issues. 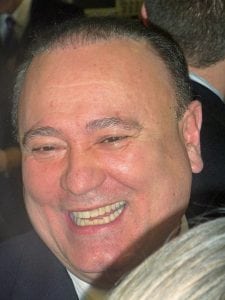 Born Jan. 3, 1956, on the Greek island of Astypalaia as the seventh of eight children, Skartados grew up on a small farm which he helped his father maintain, according to a biography shared by his chief of staff, Steve Gold.

On July 4, 1970, at age 14, Skartodos arrived in New York City with his mother. According to his official biography, within months his mother had returned to Greece and the teenager was left to learn English and work his way through school. He graduated from George Washington High School in Manhattan, worked four years in the restaurant industry and saved enough to pay his way through SUNY New Paltz, where he earned a degree in political science. At the same time, he worked at the Commandant’s Office of the New York Military Academy in Cornwall. He became a U.S. citizen in 1976.

Skartados went on to earn a master’s degree in international studies at the State University of California at Sacramento. He served an internship at the United Nations Center Against Apartheid and for eight years was chairman of the health department at the New York Military Academy and a teacher there of environmental studies and U.S. history.

He left the academy in 2000 to become a real-estate developer, renovating properties in downtown Poughkeepsie, including what became the Aegean Entertainment Center. He was the founder and president of the Academy Street Business Association.

In 2008, Skartados defeated Thomas Kirwin, a Republican from Newburgh, to represent the 100th District but two years later lost the seat to Kirwin by fewer than 20 votes.

After Kirwin died in March 2012, Skartados defeated Republican John Forman, then in his fifth term representing Beacon in the Dutchess Legislature, in a special election to regain the seat (now the 104th after redistricting). He easily won election to a full term that fall with 67 percent of the vote and was re-elected in 2014 with 60 percent of the vote and in 2016 with 81 percent. The 104th District also includes Lloyd and Marlboro.

Will the Seat Be Filled?

Frank Skartados was up for re-election to the state Assembly in November. Under state law, because the seat was vacated after April 1, the governor can schedule a special election to fill it only if the Legislature is called into special session.

“Without that, the vacancy is unfilled,” explained Jerry Goldfeder, a New York attorney who is the author of Goldfeder’s Modern Election Law.

If a special election is announced, political parties select candidates and independents can file nominating petitions. There is no primary. The winner in this case would serve until Dec. 31. Regardless, the primary and general elections will still take place to determine who takes the seat on Jan. 1.

Across the state, there are special elections scheduled for April 24 to fill two state Senate and nine Assembly vacancies that occurred before April 1.

The New York State Legislature, which has 63 senators and 150 Assembly members, frequently has vacancies, typically because an official is elected or appointed to another job. For example, one assemblyman was elected as a county clerk and another appointed as regional administrator for the Environmental Protection Agency. The closest special election to the Highlands on April 24 will be for the Senate District 37 seat in Westchester most recently held by George Latimer, who was elected in November as county executive.

During his time in the legislature, Skartados focused on environmental threats to the Hudson River Valley, including ship anchorages and the proposed Pilgrim Pipeline, said Gold. In his first term, the assemblyman secured $6 million to complete the Walkway Over the Hudson.

After regaining his seat, he secured funds to build Hudson River connector trails in Lloyd, seed money for a mixed-use vehicular-trail bridge along Fishkill Creek in Beacon and two waterfront parks along the west bank of the river, Gold said. 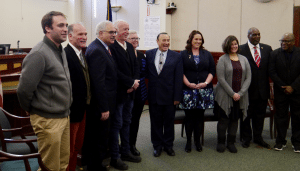 On Jan. 1, Skartados (center) officiated at the swearing-in of members of the Beacon City Council and Dutchess County Legislature. (File photo by Jeff Simms)

While in the Assembly, Skartados also secured millions of dollars in state grants for cities and towns in the district to purchase essentials such as fire trucks, police cars, snow plows, educational technology, school buses and hospital equipment and for park improvements, workforce housing and other infrastructure, Gold said.

Skartados raised goats, sheep and chickens on his Milton farm. Among his survivors are a daughter, Alyssa Skartados; two brothers in the U.S., Russos Skartados and George Skartados (Tina); and a number of siblings in Greece.

“Frank is now at peace and we should pray for his family and be grateful for his life of service to us all. Frank came to America as a young man, worked to pay his way through school, built a business, and won election to represent his neighbors in the State House. If that’s not the American Dream, I don’t know what is.” ~U.S. Rep. Sean Patrick Maloney

“Our community has lost a truly remarkable advocate and public servant. My heart goes out to his loved ones and to the dedicated team who has worked alongside him for years. May we come together today to honor the legacy of a man who worked tirelessly to always put our community first.” ~ State Sen. Sue Serino

“As an immigrant, a businessman, a farmer and a father, he truly embodied all of the qualities that make New York a great place to call home. On behalf of all the members of the Assembly, I offer his loved ones our deepest sympathies and comfort during this difficult time. We are thankful for the opportunity to have called him a friend and a colleague. May he rest in peace.” ~Assembly Speaker Carl Heastie

One thought on “Assemblyman Skartados Dies at 62 (Updated)”