Planned closure delayed until at least the fall

Although plans had called for closing access to Breakneck Ridge from Route 9D on Jan. 1 to allow construction on the Hudson Highlands Fjord Trail to proceed, it will remain open through the summer and into the fall, according to trail officials.

Scenic Hudson, which is spearheading the Breakneck Connector project that will be part of the Fjord Trail linking Cold Spring and Beacon, says the delay is due to a lack of bids on the project. It received only one, which exceeded the budget, said Senior Planner Amy Kacala. A new bidding process will begin in the fall. In the meantime, she said, the nonprofit plans to hire a landscape firm to propose modifications to the design. 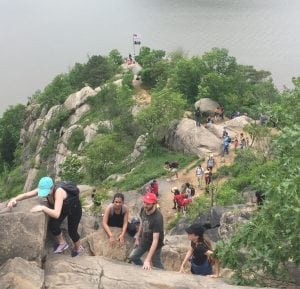 Breakneck has become an increasingly popular destination for hikers, drawing more than 1,000 visitors on most summer weekends and an estimated 100,000 in 2017. Trails.com ranks it as the most popular hike in the country, based on page views at the site, trail map downloads and user ratings.

Scenic Hudson is optimistic that the Fjord Trail, when completed, will alleviate the congestion, Kacala said. The plans include a structure at the trailhead to welcome hikers, paving the Breakneck parking lot, reducing the speed limit of Route 9D near the trailhead from 55 mph to 40 mph, painting lines for parallel parking along 9D, and new Metro-North platforms for the Breakneck stop. The trail will also remove pedestrians and bikers from the road and is intended to provide safe passage to Cold Spring and Beacon.

Linda Cooper, regional director of the state parks department, said the agency has considered capping the number of hikers who can access the white-blazed rock scramble during peak weekends, but “it’s not on the table” at the moment. She said that’s in part because it conflicts with the agency’s mission to make state parks more accessible to visitors, not less so. A cap also would require patrols along the trail, since it’s possible for hikers to reach the summit from another path and then scramble down the rocks (though signs discourage this).

“I’d like to get as many people out into the woods as possible,” he said, while finding other ways to address the problems. Osborn oversees the Breakneck steward program, through  which guides offer advice to weekend visitors. He said that last year the stewards turned away more than 3,400 hikers between Memorial Day weekend and Thanksgiving who were not prepared for the rigors of the mountain, but also counted more than 50,000 who ascended on weekends from Route 9D. Bear Mountain, by comparison, had 28,500 weekend visitors. 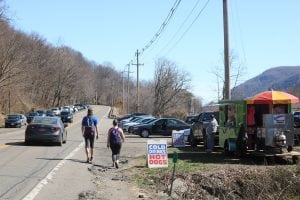 Access from Route 9D to Breakneck will remain open this summer. (Photo by Michael Turton)

Osborn said the stewards program has helped lessen the burden on first responders who are called to assist hikers who suffer minor injuries. Steve Smith, chief of the Cold Spring Fire Company, said the program has been “a huge help.” However, there are no stewards on duty on weekdays or in the off-season. Osborn said that cost is an issue, because the program is funded by private donations.

Fjord Trail plans also include improving access to Cold Spring from the trailhead and train station. The project will either improve Fair Street with additional sidewalks and possibly a bike lane or create an alternative dockside route to its west, said Kacala.

The parking lot for Mount Beacon Park will be closed until early summer because of a $250,000 upgrade that will nearly double the spaces from 40 to 77. Scenic Hudson, which operates the park, suggests hikers use lots behind Main Street in Beacon and take a G Line bus to the trailhead. 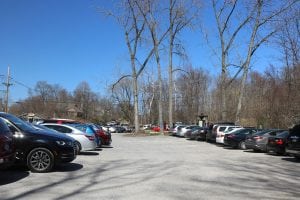 Kelley Linhardt, who live with her husband, Dan Brochu, on Fair Street near its juncture with 9D, noted that she often takes her daughter in a stroller into the village, and that “a sidewalk would be great for people who live here, too.”

Kacala said Scenic Hudson is planning three community meetings on the access route to the Fjord Trail from Cold Spring — one for Fair Street residents, one for business owners, and a third for the community at large.

The trail itself could use a break, Osborn said. In some areas it is “braiding,” or widening, as hikers pass each other or step around objects, crushing the soil and plant life at the edges of the trail. The Trail Conference plans to make repairs during the closure.

Eugene Frazier, a volunteer who picks up trash near the trail, said he has seen many drivers on 9D toss trash from their vehicles. But, he said, he also has seen many Breakneck visitors placing trash they picked up on the trail into garbage cans as they hike out.

2 thoughts on “What’s Up with Breakneck?”