Five thousand miles separate the Highlands from the Sahara Desert, but the Saharan winds will play a significant role in how many hurricanes we see in the near future.

Welcome to the world of climate science, where the observation by John Muir, the 19th-century naturalist who spent time in Garrison, rings true about how anything you pick up is hitched to everything else in the universe.

To understand how storms in the Highlands will be affected by climate change, I spoke to Tim Hall, a senior research scientist at the NASA Goddard Institute for Space Studies who studies tropical cyclones and climate variability (and lives in Garrison); Radley Horton, a research professor at Columbia University’s Lamont-Doherty Earth Observatory who specializes in the impacts of climate change (and also lives in Garrison); and Mike Favetta, a former meteorologist for News 12 Westchester who founded WeatherPrep, a firm devoted to climate-change adaptation.

All three noted the challenges of seeing verifiable trends within the noise of constant climate readings and separating various predictions into, as Hall says, “the hierarchy of what we know for sure, and what we’re mostly certain about.”

What’s for sure is that it’s going to get very wet. 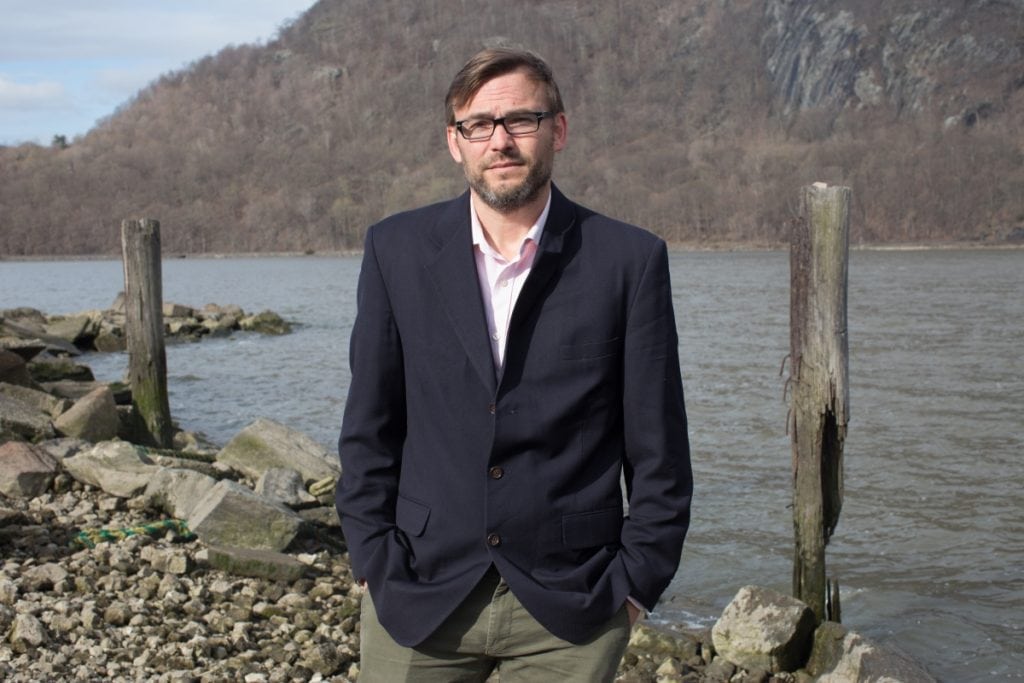 Horton says that when considering storms over the Highlands, you have to look down. “You have to start with the conversation about sea-level rise,” he says. “Even if we get lucky and only have a 2-feet increase, that still causes a threefold increase in the frequency of flooding.”

A 2-foot increase may seem small when considering the 9-foot surges that Sandy produced, but Horton points out that any increase will stay with us, even at low tide and fair weather. And it will make high tide storms more dangerous. With 3 feet of sea level rise, storms that now bring 3 feet of surge will bring a 6-foot surge, and so on. “You’re getting floods with the effects of Sandy three, five, 10 times as often,” he says. “That’s a huge risk. What was a 100-year-storm now happens every 30 years.”

It’s also getting hotter. One projection is that by 2050 the earth will be, on average, 8.5 degrees warmer. That may not seem like much in May, when the temperature in the Highlands can swing 30 to 40 degrees in 12 hours, but just like a relatively small amount of sea level rise, it can have    a big impact.

“The temperature in the human body is 98.6 degrees,” Favetta says. “If you go up 2.5 degrees, you have a 101-degree fever. The earth works the same way. When there’s more heat in the atmosphere, there’s the opportunity for more water vapor to be absorbed into the air. When there’s more heat in the air, you have more severe storms because the atmosphere can grow a little higher, and create storms that are taller and stronger.”

More severe rain causes more flooding, Horton notes. “In the Northeast, we’re already seeing that the heaviest rain events are happening about 70 percent more often than they were 50 or 60 years ago. There’s a lot of reason to think that all of that increased moisture in the atmosphere is going to fall out in more and more local events that are going to be devastating, as opposed to the sorts of gentle summer drizzles that we all wish we could get more of.” 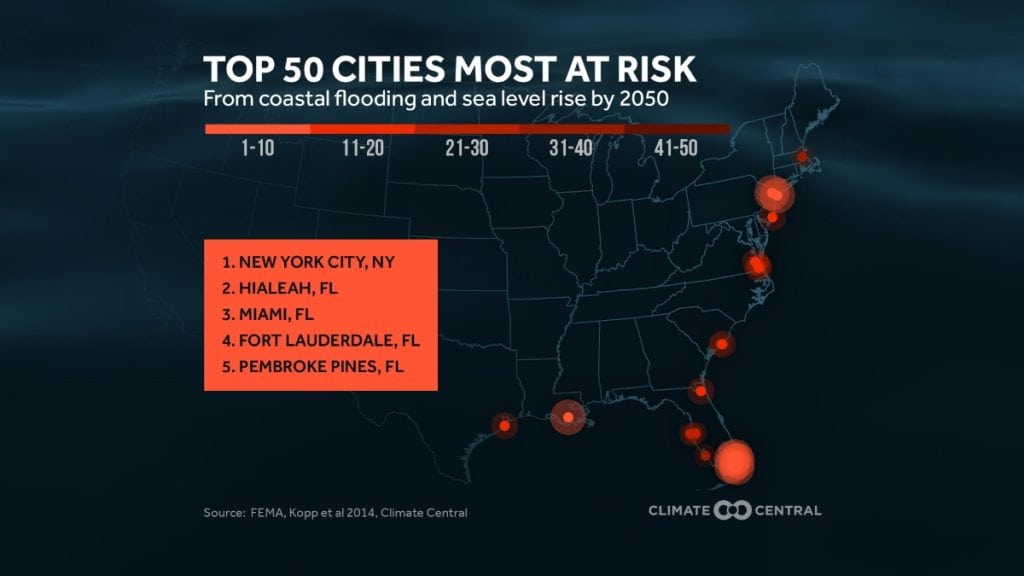 Ironically, higher thunderstorms could spell trouble for solar panels. “In the Hudson Valley, when late-afternoon thunderstorms form at the end of a hot, humid day, those storms will rapidly grow tall enough and large enough to create record-breaking hailstones,” says Favetta. “And those large hailstones have no mercy when they smash into solar panels.”

Winter won’t offer much relief. Although warmer temperatures will result in fewer days below freezing, on the days when the temperature does dip below 32 degrees the water vapor in the air should lead to more severe snow, even if the storms occur less frequently.

That trend — fewer but stronger storms — applies to hurricanes in the Atlantic as well, but for different reasons. As climate change fuels the continued desertification of North Africa, the Sahara Desert is expected to grow (it’s already the size of the U.S.), which will cause more dry, dusty desert air to be blown out to the Atlantic from westward winds.

“The dust tends to reflect incoming radiation, so it acts as a cooling agent to the sea surface below,” explains Hall. “You can get these episodes where this dry, dusty air destroys cyclones or makes them less likely to form. But once they do form, the fact that you have a warmer sea surface and more moisture in the air allows the storm the possibility of reaching greater intensity.”

So does that mean that, with fewer Atlantic hurricanes, the possibility of the Highlands being hit with another Irene will go down? Yes, Hall says, but the problem is that when the Highlands gets hit, there’s a greater chance the storm will be an absolute monster. And as with sea-level rise and temperature, it only takes a small increase in power to have a massive effect. 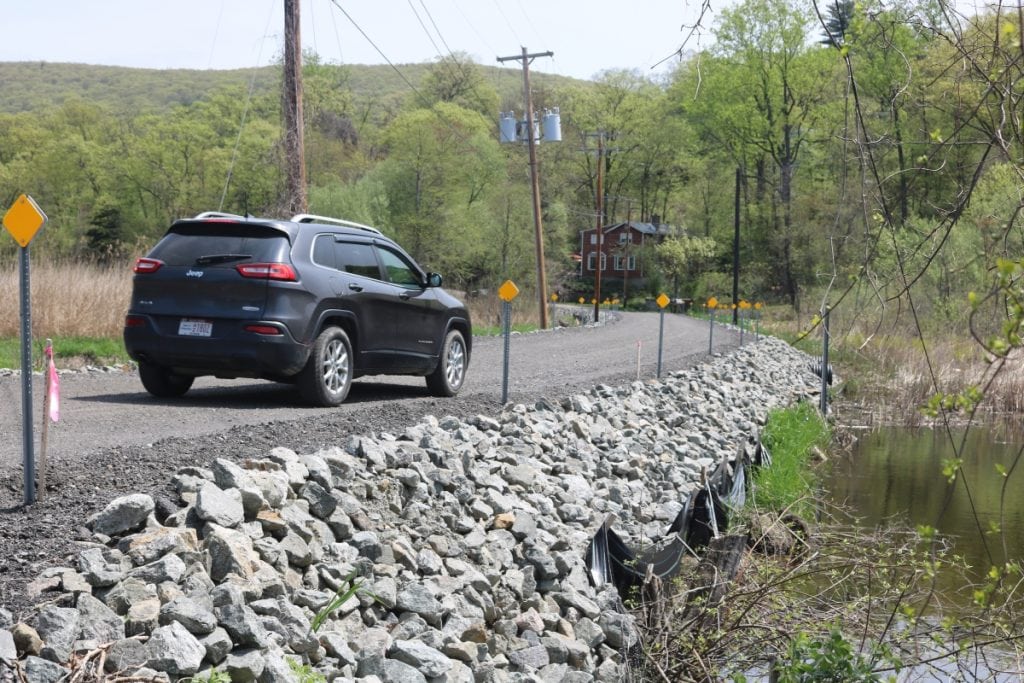 Manitou Station Road in Garrison has been raised 4.5 feet to prevent damage from flooding. (Photo by Michael Turton)

Hall, who as part of his research develops models for the insurance industry to estimate the likelihood of buildings being blown apart by storms, notes that the vast majority of damage by hurricanes over the past century can be attributed to only a handful of storms. “That’s because the damage — and now I’m talking about wind speed as opposed to storm surge — is proportional to at least the square of the wind speed. A hurricane that has twice the wind speed will do at least four times the damage.”

As Hall has discovered, the insurance industry is taking global-warming research seriously and setting rates accordingly. Horton, who helped develop climate-change models for New York City, says banks are doing the same; when 100-year floods become 30-year floods, they think twice about approving 30-year mortgages in coastal areas. Favetta says he has warned off friends who ask his advice about buying homes along the Hudson River or the Jersey Shore.

The former weatherman says the U.S. is behind the rest of the world in getting ready. He spends half the year in the U.S. and the other half in Italy, where he says companies are busy preparing their cities, economies, and agriculture for the world to come.

“You tell Italians that their balsamic vinegar is going to be more acidic in 10 years because of climate change and they freak out,” he says. “They’re trying to nip this in the bud.”