Alleging that improper political influence thwarted her plans, a developer has sued Philipstown over the Zoning Board of Appeal’s refusal to grant variances for her construction of a house on a 1.4-acre lot split between the town and Nelsonville.

Susan Green, of Essex Green Inc., based in New York City, brought the suit on May 18, claiming that actions by the town, abetted by Nelsonville, unfairly prevent the use of her sloping, kite-shaped property on Douglas Lane. A narrow, private road, the lane connects to Moffatt Road on a hillside above Route 9D.

Nelsonville is not included in the suit.

A preliminary court appearance on June 15 was adjourned until Aug. 3. 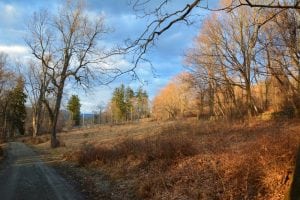 A developer is suing Philipstown over the ZBA’s refusal to grant variances for building a house on a meadow-like property on Douglas Lane. (File photo by L.S. Armstrong)

Because of the town ZBA, “my property cannot be built upon and has essentially been rendered valueless,” Green alleged in an affidavit supporting the 37-page lawsuit.

Filed in White Plains, the lawsuit asks the state’s county-level court to force the ZBA to issue the necessary variances.

Green’s lawsuit contends that “adjacent neighbors to the property are local political figures … who were determined to use their influence to block any development” on her parcel and that “the ZBA’s irrational denial of largely technical variances from local zoning bulk requirements” undermined Green’s property rights and occurred “as the result of generalized community opposition and undue political influence.”

Rep. Sean Patrick Maloney and his spouse, Randy Florke, and children, live on one side of Green’s property. The Meyer family lives on Douglas Lane on the other side and Bill O’Neill, mayor of Nelsonville, lives across Moffatt Road from Green’s land, which resembles an old farm meadow.

At a ZBA public hearing in February, Florke criticized Green’s project. Josh Meyer, son of a former Nelsonville mayor, strongly opposed the house construction, and O’Neill noted that the house would not be allowed on the Nelsonville end of Green’s parcel.

O’Neill and Florke also expressed concern about excessive stormwater run-off from a developed lot, saying that even without a house on it Green’s property sheds water that pours into the Douglas-Moffatt intersection. O’Neill likewise raised fears of sewage-tainted water from a deluged septic system on Green’s land reaching neighboring yards.

Green sought to build and sell a four-bedroom, 3,300 square-foot house on the .55-acre section lying in a rural conservation zoning district in Philipstown. The other, approximately .9-acre portion in Nelsonville would provide lawns for the house, which would also have a driveway. Town zoning law demands 10-acre house lots in the rural conservation district. Nelsonville’s zoning requires 2-acre lots.

To build the house, Green needed at least two and perhaps five variances from zoning requirements. The reason for varied variance numbers lies in history. Once, when Philipstown required house lots of 1-acre each, Green’s half-acre belonged to a 1.2-acre holding. In 1966, to obtain access to New York City’s aqueduct, which the Cold Spring water system uses in emergencies, the Village of Cold Spring bought an approximately .67-acre section of the property. That left a .55-acre remnant, which Green eventually purchased (along with her contiguous .9 acre in Nelsonville).

After months of public meetings, the town ZBA in a 3-2 vote on March 12 determined that Green’s lot was not “taken” for a public purpose, reasoning that “taking” means acquisition through eminent domain proceedings, or through a forced, hostile sale, while Green’s parcel was created as the unwanted twin to land sold willingly to Cold Spring.

The lawsuit terms the ZBA’s parsing of taken “arbitrary and capricious.”

After dispensing with taken, the ZBA voted unanimously to deny all the variances Green needed — for the discrepancy (.55 acre versus 10 acres) in lot size, the extent of impervious surfaces the project would create (25 percent, instead of the 10 percent maximum allowed by zoning law), and yard setbacks.

Along with the variances, Green wants the court to declare that the .55-acre lot is a legal, pre-existing, non-conforming parcel and to make the town pay her litigation expenses.

In her affidavit, Green complained that “I was continually ping-ponged back and forth between the village and town, in what now seems clearly to have been a coordinated war of attrition” by the two municipalities.

She said that while she had realized that her ideas “might require a few variances … I never anticipated that the property would, in essence, be deemed not-buildable as the result of generalized community opposition, including improper political considerations.”