Trustees say they see no reason to prohibit sales

The Cold Spring Village Board on July 24 declined to support a proposal being considered by the Putnam County Legislature to ban vape shops.

“I see no reason for a moratorium” when vaping products are readily available at other shops in the village, said Trustee Fran Murphy.

The measure was introduced in the county legislature by Barbara Scuccimarra, who represents Philipstown and part of Putnam Valley. Vaping involves electronic cigarettes that turn liquid containing nicotine, fruity flavors or marijuana into an inhalable vapor.

On June 20, the Philipstown Town Board unanimously passed a six-month moratorium on vape shops to give it time to write a law banning them.

Cold Spring Trustee Lynn Miller said she had researched a number of vape shops and found “you can’t even walk in if you aren’t over 18,” she said. While vaping, like smoking cigarettes, “is not good for you,” she said she knows three young adults who quit smoking “by gradually tapering down using a vaporizer.”

Miller said she has seen no evidence linking vaping to drug use. “Maybe we don’t like the way they [vape shops] look,” she said, but asked if would be right to ban other businesses, such as tattoo shops, based on their appearance. “I’m just not in favor of banning a business because we might not like it,” she said. “These are legal businesses.”

A vape and smoke shop that opened on Main Street earlier this year closed quickly, and a member of the audience claimed it was in part because of an outcry over paintings of children on the windows. “That is really bad messaging,” she said.

Roberto Muller, the coordinator for the town’s Climate Smart Communities initiative, asked the board to provide a list of potential locations that could serve as recharging stations for electric and hybrid vehicles. The stations, which include a minimum of two outlets, cost $350 each, but the state would pay 80 percent, he said. 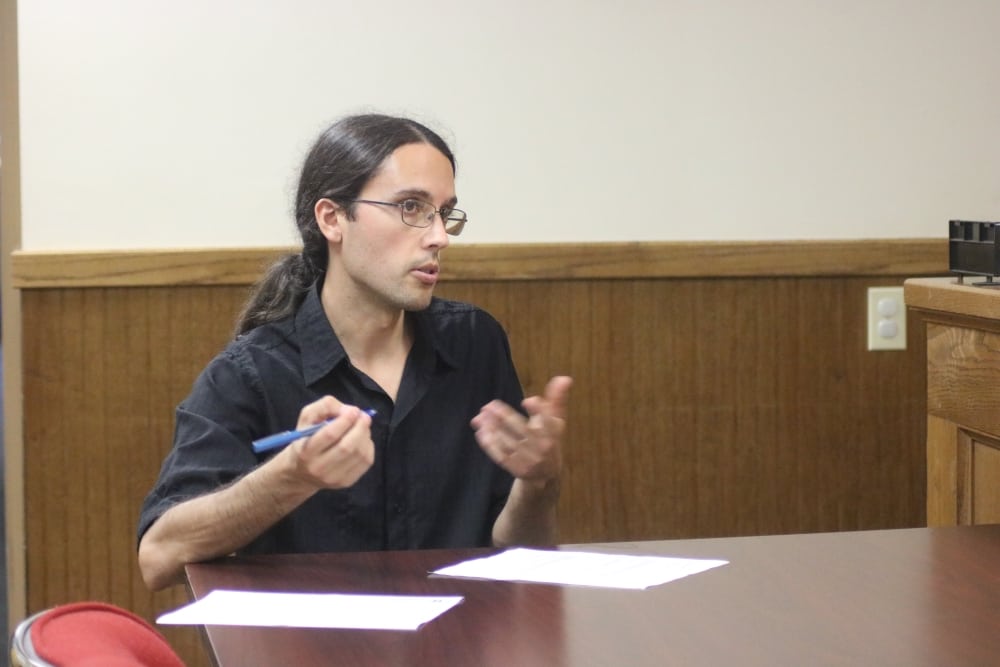 Roberto Muller asked the board to suggest locations for an electric-car charging station. (Photo by M. Turton)

Residents of Church Street agreed to change the date of their proposed block party from Labor Day to Sept. 15 after trustees raised traffic concerns. Furnace Street residents have also submitted a proposal for a block party on Labor Day.

Trustees declined a request from a Garden Street resident to change the local law to restrict demolition and construction activities at 126 Main St., the former site of Carolyn’s Flower Shoppe. Village code restricts excessive noise between 7 a.m. and 10 p.m. “If you’re working in construction as [Trustee] Steve [Voloto] and I have when it’s 100 degrees out, you have to get started before 7 o’clock,” said Mayor Dave Merandy. Murphy said there is no heavy construction in the village as late as 10 p.m.

The annual picnic for senior citizens and the appreciation dinner for village employees and volunteers will be combined as a barbecue scheduled for Sept. 15 at Mayor’s Park.