From the hallways at Haldane to Philipstown Town Hall and the Putnam County Legislature, electronic cigarettes, or “vaping” devices, have raised alarms — and calls for action.

E-cigarettes turn liquid containing nicotine, fruity flavors or marijuana into an inhalable vapor. Heated by batteries, e-cigs take various shapes and can resemble pens, computer flash drives, lipstick and phones. They’re so popular that to juul — the brand name of a popular e-cig — has become slang. 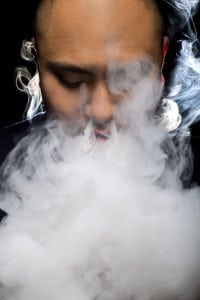 The devices are sold online and at smoke or “vape” shops. A shop opened and shut in Cold Spring this past winter, and two operate on Main Street in Beacon.

New York State law prohibits the sale of tobacco products, including e-cigarettes and liquid nicotine, to anyone under age 18, although many jurisdictions in the region, including New York City and Westchester, Rockland and Orange counties, have set the minimum age at 21.

Putnam County is considering such a move. In Dutchess County, a legislative committee voted 9-3 on April 5 not to advance a bill that would raise the age. One lawmaker, Joel Tyner (D-Clinton), argued the change would make it harder for young adults to use e-cigs in order to wean themselves off traditional cigarettes.

The Philipstown Town Board has also discussed the issue.

A 2015 report by the National Academy of Medicine concluded that raising the age to 21 could reduce smoking by 25 percent among 15- to 17-year-olds and by 15 percent among 18- to 20-year-olds. It cited studies that found  that 90 percent of smokers began before age 19.

In January, Garrison School Principal John Griffiths sent parents a letter alerting them to vaping, “a new-found way to smoke cigarettes without the ‘smoke’ … as addictive as the classic cigarette. Recently a couple of our students were overheard discussing it and possibly even having experiences of their own with it.”

Griffiths said on Wednesday (May 9) that since January “there is very little to report.” Because JUUL sticks look like flash drives, the school told parents and staff to watch out for flash drives, but these “are rarely used by middle-school-aged kids anymore,” he said.

He said the school covers the dangers of vaping in its health and counseling curriculums and “thankfully we have never had a known incident of vaping on campus, nor have we heard reports about any of our students experimenting.”

The percentage of high school students in New York who smoke traditional cigarettes fell by 84 percent between 2000 and 2016, to about 4 percent.

Between 2014 and 2016, the percentage of high school students in New York who said in a survey they smoked e-cigarettes nearly doubled, from 11 to 21 percent. Among middle-school students, it doubled to 6 percent.

In 2014, 22 percent of high-school students surveyed in New York said they had tried an e-cigarette. By 2016 that had risen 44 percent. Among middle-school students, the percentage doubled to 14 percent.

A 2014 study identified more than 7,700 flavors available for e-cigarettes, including gummy bear, cotton candy, chocolate, grape, and cookies ‘n cream. Traditional cigarettes that have flavors other than menthol or tobacco have been banned in the U.S. since 2009.

“While many students feel that these are safer alternatives to tobacco cigarettes, recent studies are showing information to the contrary,” they wrote, noting that nicotine delivered by vaping is still addictive and that “wanting to vape all day” won’t help anyone’s grades. They noted that e-cig vapor has little or no scent and dissipates quickly, making it difficult to detect.

The administrators also pointed out that students caught on school grounds with e-cigs face suspension.

In December, the administrators recirculated the letter. “Vaping continues to be an issue at Haldane,” they noted. “We ask that you please have a conversation with your children about this.”

Haldane did not immediately respond to an inquiry about the prevalence of vaping on campus. Similarly, the Beacon City School District did not reply to questions.

Putnam County has addressed vaping since at least 2014, when the Legislature encouraged the state to regulate e-cigs.

On Tuesday (May 8), two anti-smoking advocates urged legislators to raise the minimum age for buying tobacco products to 21. 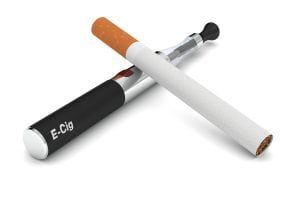 While the number of high school students in New York who smoke tobacco cigarettes has plummeted, the percentage who vape has doubled. (File photo)

“There are way too many new products out there, hooking our kids and leading them to stay addicted,” Kevin O’Flaherty, regional advocacy director of the Campaign for Tobacco-Free Kids, told members of the Legislature’s Health and Environmental Committee. “We’re seeing the cigarette numbers stay low, but the e-cigarette numbers go up.”

Julie Hart, director of New York government relations for the American Cancer Society’s Action Network, described the e-cig industry as “very sneaky and very manipulative” in attracting students, “undermining all the progress we’ve made” against smoking.

The committee, which is chaired by Legislator Barbara Scuccimarra, who represents Philipstown, also has looked at regulating vape shops through zoning laws, though Scuccimarra said towns or villages must take the lead because they, not the county, control zoning. In November, the Westchester town of New Castle banned vape shops from operating within 2,000 feet of a school or 500 feet of a park or playground.

During her monthly report to the Philipstown Town Board on May 3, Scuccimarra called vaping “a real problem in our schools” and said “it’s a just a tragedy what’s going on.”

She suggested the town look at zoning restrictions, and Councilor Nancy Montgomery said the town attorney is reviewing that approach.

Supervisor Richard Shea noted that the “marketing of these things to children is just ridiculous. And the federal government is idly letting it happen. What’ll they have next? Grape-flavored whiskey?”