Do drivers and pedestrians need a wake-up call?

When using a crosswalk, pedestrians always have the right of way, but being dead right is a huge price to pay.

While drivers are obligated under state traffic law to yield to pedestrians in crosswalks, many seem oblivious. According to the Institute for Traffic Safety Management and Research, most of the 320 pedestrians killed in New York State in 2016 (the most recent figures available) had the right of way. Driver distraction or inattention are the most common causes of fatalities.

“How do we not have more pedestrian accidents?” asked Lt. Tom Figlia of the Beacon Police Department. “We have so many more people crossing streets and driving but have a remarkably low rate.” 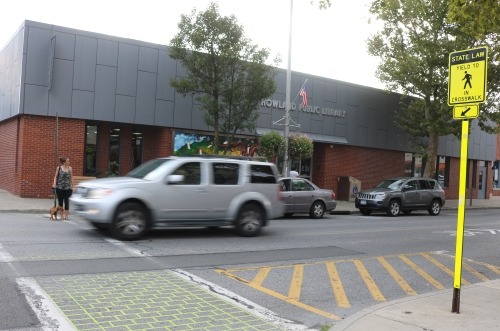 A vehicle flies by the Howland Public Library on Aug. 21 as a pedestrian waits to cross. (Photo by M. Turton)

While Beacon is improving pedestrian safety at nine intersections, he said the “hot zones” for accidents are further south in more densely populated Rockland and Westchester counties and New York City.

Motorists must yield to pedestrians not only at crosswalks but also at any intersection that does not have a traffic signal. Failure to do so can cost a driver three points on his or her license and a fine of up to $300.

According to Transportation Alternatives, an advocacy group for pedestrians and bicyclists, typically a driver will be charged with the traffic violation of failing to yield but not a crime for injuring or killing a pedestrian in a crosswalk unless he or she violated a second traffic law at the same time, such as speeding or running a light. (Notably, in 2014 New York City made it a misdemeanor to injure a pedestrian or bicyclist who has the right of way, with a jail term of up to 30 days.) 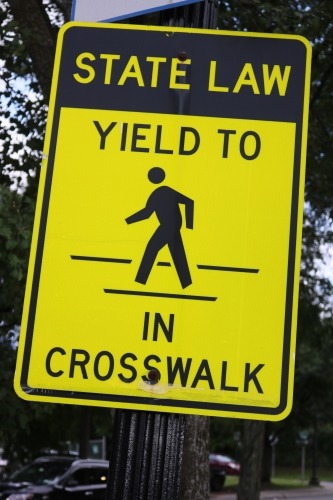 Some signs remind drivers that yielding at crosswalks is a state law. (Photo by M. Turton)

Larry Burke, the officer-in-charge of the Cold Spring Police Department, adds that pedestrians should recognize their obligations, as well.

“We see people cross in and out of the crosswalks, between cars, staring up at the sky or buildings,” he said. “I’m grateful we haven’t had a lot of injuries.”

Under state law, pedestrians cannot “suddenly leave a curb … and walk or run into the path of a vehicle which is so close that it is impractical for the driver to yield.” In other words, they must give drivers time to stop.

“It’s a bit of a gray area,” Burke said, adding that it requires common sense. “If someone looks like they’re going to cross, the driver should stop.”

Pedestrians can be ticketed and fined for jaywalking — crossing a street in the middle of a block — but only if they impede traffic. “If there are no cars coming and you’re not causing a traffic problem, you can cross in the middle of the block,” Figlia explained.

Figlia stressed the need for pedestrians to be aware of their surroundings. “If someone is getting ready to cross the street, he or she has to make that known to drivers,” he advised. “Look both ways. Put a foot out so that it’s obvious you’re starting to cross.”

He said that those on foot sometimes forget what drivers face. “Drivers have to notice they are coming to a crosswalk, perceive that someone is getting ready to cross, and respond,” Figlia said. 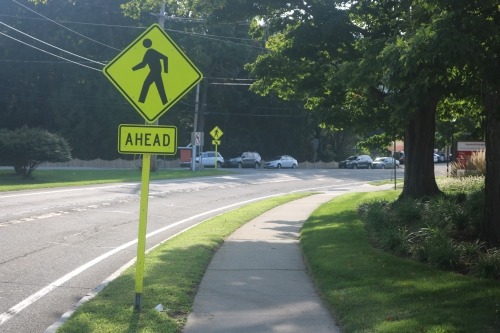 In some spots, such as on Route 9D in Cold Spring, signs alert drivers that they are approaching a crosswalk. (Photo by M. Turton)

In Nelsonville, Mayor Bill O’Neill said more work needs to be done on pedestrian safety. “We have a toxic brew of ever-increasing traffic, speeding and inadequate signage,” he said. “We need a comprehensive approach, starting with a traffic survey” followed by more visible and dramatic signage and road markings.

O’Neill said the village asked the state Department of Transportation, which has jurisdiction over Main Street in Nelsonville because it is a state highway, to install a crosswalk at Fishkill Road, but that the agency declined after a safety engineer concluded that the alignment of the intersection made it unsafe for a crosswalk.

According to the National Highway Traffic Safety Administration, pedestrian deaths nationwide increased by 46 percent between 2009 and 2016, and the Governors Highway Safety Association reported that the 5,984 pedestrians killed in the U.S. last year was a 33-year high. In 2016, the most recent figures available, Putnam and Dutchess counties each had two pedestrian fatalities.

Artistic interpretations from around the world

One thought on “Playing Crosswalk Roulette”