Rep. Sean Patrick Maloney, whose district in the U.S. House includes the Highlands, will continue his campaign to retain his seat after finishing third in a field of four on Sept. 13 in the Democratic primary for state attorney general.

A Siena College poll taken four days before the election of 509 likely voters showed Maloney with a slight lead over James. The race was considered a tossup.

Maloney upset some Democrats in his district who believed, should he win the AG primary, it would be more difficult to keep his seat blue in the general election with a late addition to the ticket. He also was challenged on the legality of using funds he raised to run for Congress for his AG campaign. He is being challenged for his House seat by Orange County legislator James O’Donnell.

Maloney countered criticism of his AG run, telling City & State, “I’ve got the weakest [congressional] opponent I’ve ever had, and for that reason, we are in very good shape in this district one way or the other.”

Tish James, the New York City public advocate who has the backing of Gov. Andrew Cuomo and received the Democratic Party endorsement, would be the first black person and first woman elected to the job if she defeats Republican candidate Keith Wofford in November. Had Maloney won the primary and the general election, he would have been the first openly gay statewide elected official.

Teachout is a law professor who in 2016 was the Democratic candidate for the 19th House District, which includes much of Dutchess County. She lost in the general election to Republican John Faso. Eve is a Verizon executive and former Clinton administration aide.

In a statement posted on Facebook on Sept. 13 after the polls closed, Maloney wrote: “I want to thank everyone — no matter who you voted for — who came out and cast a ballot today. This is the Democrats’ year, and it’s time for us to rally together and get to work.” 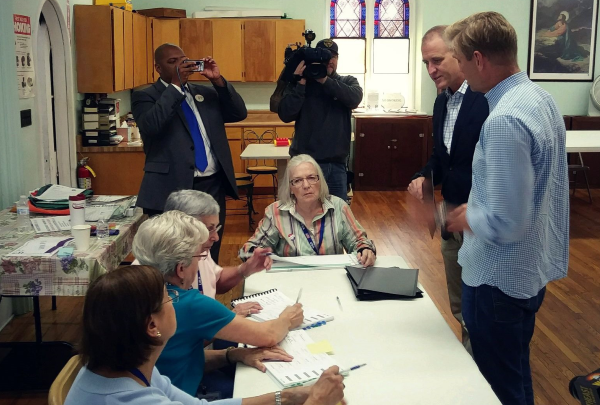 Maloney also ran in the Democratic primary for attorney general in 2006, finishing third in the field of four. The winner was Cuomo, who later became governor.

In Dutchess County, Teachout received 42 percent of the vote and Maloney, 34 percent, followed by James with 20 and Eve with 2. The turnout was 30 percent. In Putnam, Maloney won 42 percent, Teachout 37, James 18 and Eve 2. Turnout there was 28 percent.

In the Reform Party primary for attorney general, Nancy Sliwa won the line in a field of three with 39 percent of the vote. She won Dutchess with 37 percent of 1,073 votes cast and Putnam with 45 percent of 133 votes.

In the Democratic primary for governor, incumbent Andrew Cuomo easily defeated challenger Cynthia Nixon, 64-34, with the remaining ballots voided or write-ins. In both Dutchess and Putnam counties, the outcome was 62-37 in Cuomo’s favor. The governor will now face Marc Molinaro, the Dutchess County Executive and the Republican gubernatorial candidate, in the general election.